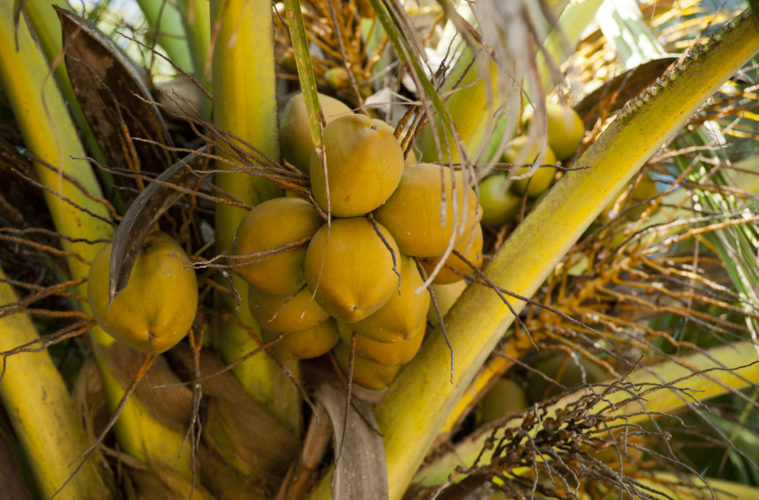 The coconut is still a viable form of income.

There is an increasing and renewed interest in coconut farming among smallholders and corporate farmers involving thousands of hectares. Several foreign investors have shown interest in investing in both the production and processing of coconut into high end products.

For example, if a farmer decides to engage in coconut sugar production, planting a traditional variety which produces two liters of toddy daily for coco sugar processing would mean low production levels of less than 17 tons of coconut sugar/hectare or ha per year as compared to the yield of the “Matag” hybrid, which is over six liters of toddy/day. This means over 54 tons of coco sugar for an income of over one million pesos/ha per year.

A fruiting Tacunan variety in a farmer’s field in La Paz, Agusan del Sur at 4.5 25 years old. Trees of this variety flower within 3 years after planting
and produce 3 to 4 tons of copra/ha per year.

Comparison of Yields Between Dwarf and Tall Varieties Locally

The Philippine Coconut Authority – Zamboanga Research Center (PCA-ZRC) in San Ramon, Zamboanga City has a current local and foreign genetic collection of more than 51 tall and 24 dwarf varieties. The PCA-ZRC has also, through research, developed four outstanding hybrids. The features of some of these varieties and hybrids—which are now being duplicated at the authors’ Triple P Farms and Nursery (TPFN) Coconut Hybridization and Research and Development (R&D) Center in Agusan del Sur is shown in Table 1.

A fruiting Tacunan variety in a farmer’s field in La Paz, Agusan del Sur at 25 years old. Trees of this variety flower within 3 years after planting
and produce 3 to 4 tons of copra/ha per year.

The size of these nuts is generally small, less than a kilogram or kg/nut. The exception are the nuts produced by both the Catigan and Tacunan varieties, which can grow to 1,120 grams or g to 1,350 g in less fertile soil, and over 1,500 g/nut in fertile soil. Tacunan and Catigan can be considered to be among the outstanding dwarf varieties due to their large number of flowers of 17 or more/year; early maturity (four years or less); and high copra yield of over four tons/ha per year under good agricultural management practices.

The performance of these two dwarf varieties are a world-class rarity due to their high yields as varieties. Between the two, Tacunan is more adaptable than the Catigan. The Catigan exhibits seasonal bearing phenomenon in places with three or more months of dry period. Both Tacunan and Catigan are varieties suitable for the production of mature nuts for copra, desiccated coconut, VCO, and other products. Both varieties are also suitable for coconuts to be used in sugar production due to their high toddy yield and short stems; these qualities persist for a long time.

Some dwarf varieties like the MRD and MYD produce small fruits of 600 to 900 g, and these are suitable for market as young nuts with coco water. In Indonesia and many other countries, these varieties are widely used as backyard landscaping crops, although they are generally grown in wide plantations for the production of young nuts for coconut water, coconut sugar, and copra. The trees remain dwarf for a long time. They also have high toddy yield, making both varieties more suitable for coco sugar production than many tall varieties. Probably the MRD and MYD are the most widely grown dwarf varieties in the world.

In Thailand, “Nam Wan” and “Nam Hom” are the most popular dwarf varieties. These are largely utilized for the production of young nuts with coconut water and soft meat or cotyledon for food (Fig. 2). These two varieties are probably the most widely traded coconuts worldwide for coconut water with young nuts. Both varieties are grown in in isolated farms in Thailand, with their plots situated 50 meters or more from other coconut varieties to prevent cross pollination, which brings about product deterioration. Plants which are grown in low elevations near the sea produce the best quality young nuts.

3. The hybrids: Many plant features of the four hybrids of PCA have similarities with the dwarf varieties; they flower early and bear nuts within three years after field planting. They are high yielding, at three or more times the yield of the traditional tall and dwarf varieties. The authors’ experience at TPFN farms and observations they made in Malaysia, India, and Indonesia showed that hybrids like Matag and Mawa have shorter, compact, and more abundant leaves, similar to the dwarf varieties. This make them highly suitable for high density planting of 175-200 plants/ha; this
results in high yields.

The “Matag” hybrid is a cross between an MRD and Tagnanan tall, with MRD serving as the mother. The seedlings are very vigorous (Fig. 3). They are benefitted by partial shading during the first two years. This makes this hybrid highly suitable for replanting in areas with tall and less productive coconut trees, with delay in cutting. Cutting of the tall trees can be done when the Matag plants are two years old or are about to flower. This will cause a minor disruption in nut production.

Matag hybrid trees hybrid produce high toddy yields of six liters or more per day. The nuts produced are of medium size, making the same highly suitable for the commercial production of young nuts with coconut water and soft meat for food. Provided with adequate fertilizer and appropriate cultural management practices, Matag can yield higher than five tons/ha per year. This makes this hybrid highly suitable for the production of copra, dessicated coconut, VCO and more.

Mawa, which is a cross between the West African Tall (WAT) and MYD, produces higher toddy yields for coconut sugar production than Matag. It is the most desired hybrid of farmers who are engaged in coconut sugar production in Southern Mindanao. However, it has been observed that, in areas with poor soil and/or low rainfall, Mawa is susceptible to phytopthora disease. This malady is overcome by adequate fertilization and irrigation. In Malaysia and India, this disease is practically absent as the coconut plants are provided with adequate fertilization and irrigation. Many of the areas planted to hybrids in India have dry periods of four to seven months. Under these conditions, the coconut hybrid trees are irrigated, which results in higher yields.

Table 2 shows the yield data at the United Plantation Berhad (UPB) of Malaysia in the production of Mawa, Matag, and Malayan Tall. These two hybrids are grown on thousands of hectares at UPB, and can produce copra as early as in the fourth year. High copra yield is attained when the hybrids are six years and older.

These eight month-old Matag hybrid seedlings are being loaded at the TPFN nursery for a field planting experiment. These seedlings are very
vigorous, and when properly cared for in the field, can produce mature nuts in just three years after planting.

The opportunity for high incomes from coconut by producing high value products is fast unfolding. Today, a coconut farmer has the potential to earn a million pesos/ha per year in coconut farming. The key is in the use of the right variety or hybrid coupled with appropriate agricultural management practices to produce the intended high value products. There is an increasing worldwide demand for high value products such as coconut water, VCO, and coconut sugar.

Dave Lobo, a noted expert on hybrid coconut production, estimated the income of thousands of coconut farmers in India planting high yielding hybrids and using modern cultural management practices, including low-cost drift irrigation. These farmers have been transformed; from having low incomes, they have reached the middle income level.

Among the greatest challenges in coconut farming is how to develop a quick response to the damage caused by natural calamities such as typhoons. For example, Typhoon Pablo totally damaged six million productive coconut trees in the three towns of Davao Oriental in 2012. Typhoon Yolanda, in 2013, damaged almost 20 million trees in the Visayas. Planting materials of varieties or hybrids which are early maturing could have made the recovery of the farmers faster.
Unfortunately, the seednuts were not available. Instead, seednuts of tall varieties with maturity periods of over six years were distributed to farmers.

That is why, until now, the farmers have not recovered from the damage of the typhoons. It is hoped that when similar calamities happen again, the government will have a better response. This can be done by establishing commercial seednut farms of early maturing varieties like the MRD, MYD, Tacunan, Catigan, and the hybrids.

To summarize, two recent developments in coconut give farmers hopes for high incomes. The first development involves the identification of high yielding varieties (HYVs) and hybrids for high coconut yields four or more times the yields of traditional varieties. This assumes that the new HYVs and hybrids are provided with adequate cultural management practices, including irrigation in areas with pronounced dry periods, as is done in India and other countries.

The second breakthrough is the increasing demand for high value and high priced coconut-based products like coconut sugar, coconut water, and VCO, which offer a wide range of nutrition and health benefits. Likewise, there is a large demand for high value products of coconut, from coco husks and shells, which are not discussed in this article.

As observed in other countries like India, Brazil, Malaysia, and Thailand, success in the utilization of these breakthroughs to benefit smallholder farmers requires both strong government support and private sector participation. An example is the strong private sector participation in the research and production of hybrid seeds of corn coupled with strong extension services.

This led to the transformation of the Philippines from an importer to an exporter of corn. For coconut, this has to go beyond what the private sector is doing in corn, and should include the development of world-class high value coconut products for which there is a need and demand in the emerging world market.