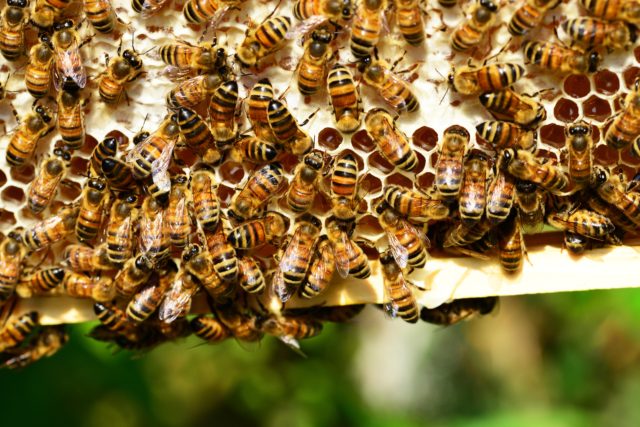 Getting to know what kind of bees are these, reasons why they became essential to agriculture, and every other things you need to know about stingless bees.

by Sandy and Doc Rey.

One topic we have been drawing nationwide attention to is the importance, as natural pollinators, of our native stingless bees.

This is Engr. Martin de Leon who incorporates the stingless bees in his aquaponics setup.

What is a native stingless beehive?

In its native habitat, we have observed that stingless bees (Trigona biroi, commonly found in Luzon) usually nest in crevices formerly occupied by mites with an area of at least 4 x 4 x 6 inches. This species creates weird looking entrances with lots of sticky propolis to protect them from intruding ants, and they are generally aggressive compared to their VisMin (Visayas/ Mindanao) counterparts.

Native stingless bees (Trigona laeviceps, sapiens irridipenis) also nest in crevices; however, a colony can mature even if the nest area is only as big as a ﬁst. They are found in bamboo poles, balusters, ladder, or even in coco steps made for ease in coco harvesting. Their numbers are small and they can be observed up close as they are generally friendly. Stingless bees prefer partial shade; the VisMin species prefers full shade.

Do the stingless bees swarm?

The term ‘swarm’, when it comes to stingless bees, differs a lot from when we refer to the Apis mellifera. With the latter, swarming is propagation induced or a form of colony defense. They create a new colony with the queen in search of a new nest, together with a small group of workers, to build everything from scratch.

For the Trigona biroi, ‘swarming’ does not apply simply because the colony is used to having several queens and that a unanimous decision to swarm is next to impossible.

What is hive splitting?

Splitting is an artiﬁcial way of propagating stingless bees to produce additional colonies. It is done by carefully dividing the brood and providing a new box to house the new split (colony) thus, making a single hive into two. If a colony is very strong, it can be split into two more colonies, so a single hive houses a total of three colonies. The new split must be placed in the original hive location and the mother colony transferred at least a hundred meters away.

The other new colony may not have an existing queen but the workers will nurture a queen for egg laying. When all conditions are right, a new egg-laying queen can be found in a month.

This colony settled inside an old rice cooker. It was easy for us to check the inside of the hive.

No bees can be found when opening a Trigona biroi (commonly found in Luzon) hive, simply because they install something like a ceiling called the involucrum on top of the hive structure being occupied. When the involucrum is removed, the middle of the hive is the egg mass, densely surrounded by storage pots and other structures. Eggs are placed side by side with ample spaces in between levels that are formed like a pyramid.

The hives of Trigona laeviceps (commonly found in VisMin) has its egg volume towards the center and gradually occupies the rear portion of hive, while pots of pollen are placed near the entrance, consisting of several pots of honey, but they tend to separate most of the honey if the hive is long enough to accommodate honey pots at its rear.

The same goes for the other species common in VisMin, Trigona sapien. Both VisMin species place their eggs apart from each other along the veins constructed to hold and stabilize the egg mass at the center of the hive. The same veins serve as a passageway as the queen moves around to lay eggs and as workers perform their daily routines.

What do the bees build their internal hive from?

The involucrum, honey and pollen pots, and propolis came from a mixture of resins often gathered from trees, coupled with wax secreted by the worker bees. They usually favor trees with sticky sap like mangoes, jackfruit, pili, and citrus.

The color of the propolis at the entrance allows you to ﬁgure out the source of the resin, as evidenced by the hive entrance. They prefer to access trees nearest to the hive. The use of resin around the entrance hole is one of their major defenses.

Should the hive be sited in any particular way?

It is best to site the hive facing east so that it can take advantage of the early morning sun, but if the wind is coming from that direction and you expect a threat (any form of chemical spraying or severe rain conditions) from there, then it would be logical to site the hive entrance facing the opposite direction. Please ensure that the bees always have a clear ﬂight path, which may involve a little pruning of the trees around the hive.

Do the Trigona control the hive temperature?

Yes, stingless bees do regulate hive temperatures. First, the brood area is enclosed by the involucrum; in cold weather, the bees cluster and warm up the space. In hot weather they fan the air and open holes in the involucrum. Their aim is to keep the brood temperature between 35-36OF.

If the sun is already up but still there is no activity at the entrance, this means there is a major problem inside.

Do they have any predators?

Yes. The most common are small hive beetle, lizards, and spiders. Spiders should just be removed; however small hive beetles can occasionally kill a hive and there is nothing that can be done about it. Stingless bees are generally good at colony defense but keep an eye on new splits and weak colonies as they are the usual targets of predators.

When the colony is weak or when there are few guard bees, they protect themselves by making the entrance hole to their hive much smaller. Please do not enlarge the hole as you will place your hive at risk. In extreme cases, they even close the entrance to allow the colony some time to recover before opening it again.

Are there any other major threats?

Yes. Water in the hive is very dangerous. Please do remember that they control hive temperature; thus, unnecessary water in the hive spells danger. It is best if a covering can be installed right on top of the hive entrance and the entire hive structure is sealed.

What about other nearby Trigona hives?

Trigona hives sometimes ﬁght each other. Although they are stingless, they do have mandibles (mouth parts) and with these, they can hold enemies while others wrap the offender in resin, (which they always have ready just inside the opening). The enemy ends up being part of the internal hive structure.

The easiest way to tell if Trigona colonies are ﬁghting is by the number of dead Trigona found in the vicinity of the hive, still gripping each other. There is no known way to prevent these ﬁghts and usually, the hives does not appear to be badly affected.

How many Trigona bees are in a healthy hive?

For the stingless bees common in VisMin (Trigona laeviceps and sapiens), there can be anywhere from 6,000 to 10,000 individuals in a strong and healthy hive, while an old and fully mature colony commonly found in Luzon (Trigona biroi) can have from 70,000-100,000 individuals.

What is the best place from which to observe them?

This would be off from one side of the front of the hive, below the entrance. Watch carefully, and you will see them with full pollen bags attached to their legs. The pollen will vary in color from bright yellow to almost black. It is dependent on what ﬂowers are in bloom at the time.

The 11th National Organic Agriculture Congress (NOAC) will be held on November 11, 2014 in Davao City. Let’s make that easy to remember: 11th NOAC, 11/11, Region 11. The regional organic focal persons of the different Department of Agriculture (DA) Regional Field Ofﬁces are in charge of preparing the guest lists. Expected to attend are 1,500 participants from all over the country.