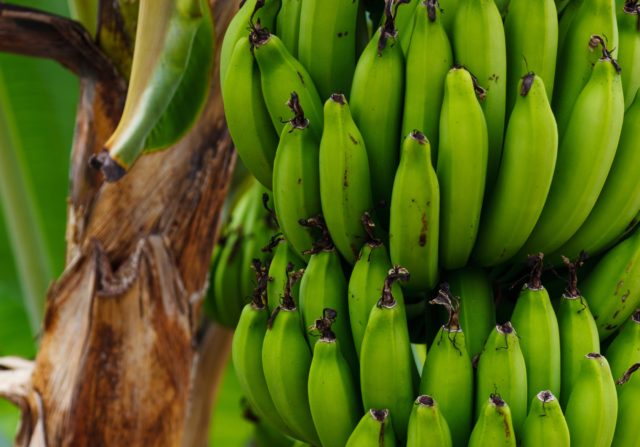 Find out the what researchers are doing to a variant of the Cavendish banana to make it resistant to the fusarium wilt disease.

Researchers and farmers are particularly paying attention to one tissue-cultured variant of Giant Cavendish banana that is being ﬁeld-tested in Mindanao against the very destructive Fusarium Wilt of Cavendish banana.

Ervin Naval posing with a bunch of GCTCV 106, a variety resistant to Fusarium Wilt that is low-growing.

This is the GCTCV 106, one of seven variants from Taiwan that is under trial in ten farmers’ ﬁelds in Davao City and further north. On June 10-11, 2014 we joined the monitoring team from the government institutions that visited test farms planted to the variants in August 2013; these plants have begun to bear fruit.

SHORT-STATURED – At the De los Reyes farm in Tamugan, Marilog district in Davao City, Maximo Cosgafa is very impressed with the performance of GCTCV 106. Aside from its high resistance to Fusarium Wilt, it is short-statured as compared to the Grand Naine variety that is currently grown commercially.

The fruit bunch is just about breast-high, so harvesting is very convenient, and so is maintenance of the banana plants. Another good characteristic of 106 is that it has very good bunch and hand formation. The individual fruits or ﬁngers are well arranged, which means there are less rejects in bunches destined for the export market. The so-called ‘wild ﬁngers’ or hands with ﬁngers that are not aligned have to be made into clusters of at least ﬁve ﬁngers to be accepted in the export market.

The same observation was made in the plantation of the Mampising Carp Beneﬁciaries Multi-Purpose Cooperative (MCB-MPC) in New Corella, Davao del Norte. The GCTCV 106 plants are short-statured and also produced bunches and hands with very good formation.

INFESTED FIELDS –  We also visited the 80-hectare banana plantation of GEA Farm, also in New Corella. The seven banana variants were planted in areas that were previously abandoned due to heavy infection with Fusarium Wilt. Just the same, the seven variant varieties showed very minimal infection.

Actually, GCTCV 106 is the third variant to be observed as very promising by the researchers and planters. Earlier, No. 219 and 218 were ﬁeld-tested and were considered very good candidates for commercial planting. These were featured in the April 2014 issue of this magazine.

Gretchen Nas (left) of PCAARRD talking with the farm overseer of a plantation where Variant 106 is showing very healthy growth.

GCTCV 218 will soon be planted in bigger areas through the funding of the Philippine Council For Agriculture, Aquatic and Natural Resources Research and Development (PCAARRD).

Meanwhile, the PCAARRD is funding the further ﬁeld trials in farmers’ ﬁelds of the seven GCTCVs, including No. 219 and No. 218, with a ₱35 million budget. It is being implemented through the joint efforts of the University of Southeastern Philippines (USEP) in Davao City and the Bureau of Plant Industry, also in Davao City.

Hands of Variant 106 being prepared for shipment.

Aside from Nos. 219, 218, and 106, four other variants are included in the ﬁeld trials in ten farms. These are Nos. 105, 119, 215, and 247. For this particular research project, the purpose is to discover “Science and Technology Management Approaches Against Fusarium Wilt on Cavendish in Mindanao.”

THREE COMPONENTS – Aside from the adaptability trial of the variant plants, the second component is the development of biological control strategies. The third component is assessment and distribution of Fusarium Wilt incidence. It has been reported that at least 5,000 hectares of Cavendish plantations have been affected by the disease, and 3,000 hectares of which have been totally abandoned.

SIGNIFICANCE OF THE GCTCVs – Since the resistant variants can be planted in wilt-infected soils, the small farmers who cannot afford to buy new land for planting bananas can plant their farms with the resistant variants. They don’t have to buy or rent new areas to grow their banana crops.

Although the multinational companies do have the funds to relocate their plantations, they too can beneﬁt from the resistant variants. Among those who are deeply involved in the implementation of the ﬁeld trials of the seven variants are Dr. Jocelyn E. Eusebio of PCAARRD’s crops research division; Dr. Lorna Herradura of the Bureau of Plant Industry (BPI) who heads the ﬁeld trials, and Prof. Belly Dionio of USEP, who heads the biocontrol component of the project. At the Mabini Campus of USEP, Cecirly G. Puig showed us greenhouses where plants that were intentionally infected with Fusarium Wilt are being grown in plastic pots using different biocontrol agents, either singly or in combination with one another. These biocontrol agents are trichoderma, VAM (vascular arbovascular mycorrhiza), and EM or effective microorganisms.