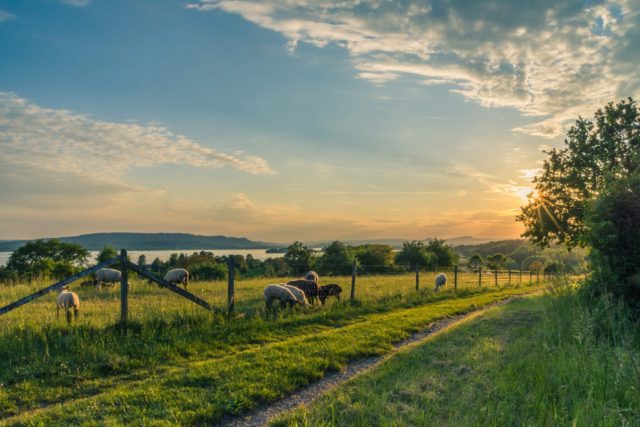 See how vegetable grower Roberto Principe encouraged farmers in Quezon to get into Agriculture.

by Tony Rodriguez and Randy Avila

Barangay Ibabang Bukal in Tayabas City in Quezon Province is fast becoming known for vegetable production for three reasons, two of which are environmental. Tayabas has cool weather most of the year because of its proximity to the southeastern side of Mt. Banahaw, the active volcano that’s the CaLaBaRzon Region’s tallest mountain. Banahaw and its neighbor Mt. San Cristobal form a national park and protected area. Tayabas’ mostly hilly terrain also has places with freshwater springs, like the barangays of Ibabang Bukal and Ilayang Bukal . The city’s farmers thus have water for their crops year-round.

Roberto Principe poses with fruits of Condor Trident Improved ampalaya that he produced.

Vegetable grower Roberto Principe may be the third reason for the upsurge in vegetable production. Lacking formal schooling but banking on his vast experience (which dates back to his boyhood), this farmer is not afraid to grow veggie crops on a relatively large scale. He’s always conﬁdent that going big means getting a bigger income than from planting a smaller area. And his success has greatly encouraged other farmers in the area to help make vegetables a signiﬁcant product of Tayabas after rice, coconuts, and lambanog.

At ﬁrst, Principe persevered with the small piece of land, less than two hectares in size, which he inherited from his poor farming parents. He joined the cooperative at the Sentrong Pamilihan ng Produktong Agricultura (SPPA) in Sariaya town, the middleman-free veggie trading center established by then-congressman Proceso Alcala in 2007. Alcala is currently the secretary of the Department of Agriculture. The co-op gives interest-free crop input loans and provides extension services and free hauling of its members’ harvests from their farms. The valuable marketing assistance that the SPPA provided spurred Principe to rent land in the Lucban and Tiaong towns and in Liliw, Laguna for growing vegetables, until the proﬁts from those ventures enabled him to enlarge his landholding in Tayabas to about 10 hectares. With the help of his wife Loreta and his chief caretaker, Gilbert “Ambet” Ordinario, he settled down in Ibabang Bukal to grow pole bean, radish, the pakchoi variety of pechay, sitao, hot pepper, cuccmber, and ampalaya to supply to the SPPA. To ensure the continued availability of water for the barangay’s crops, Principe helped rehabilitate the spring there. Tayabas’ proximity to Sariaya is a distinct advantage. He’s now known in the SPPA as one of the top veggie producers in Quezon province.

In addition to his determination and in spite of not being able to go to high school, Principe is very open to new farming technologies and products. When he sensed that the ampalaya that he was growing season after season seemed to be weakening in terms of yield and disease resistance, he agreed to a techno-demo of a new variety that the Market Development technologist for Quezon Province of vegetable seed and crop care company Allied Botanical Corporation (ABC) offered to conduct. The technologist supplied him with seed samples of ABC’s Condor Trident Improved F1 Ampalaya, which he planted alongside the old variety that he used. The Condor variety, with its vigorous growth, improved disease resistance, and higher yield potential, was clearly superior to his ampalaya.

Roberta and Loreta Principe give the seedlings in their nursery a thumbs-up.

The result of the techno-demo made Principe promptly discard the variety he had been growing in favor of the ABC cultivar. The company is known for the pinakbet crops that its Research and Development Farm in Tayug, Pangasinan breeds, thoroughly tests in multiple locations throughout the country, and markets under its Condor Quality Seeds brand.

To properly start the Condor Improved Ampalaya that he bought, Principe also became acquainted with what is reputedly the best growing medium available in the Philippines today, Klasmann Peat Substrate, that ABC also markets. Imported from Germany, the product ensures high seed germination and seedling survival rates. Commercial vegetable and ornamental crop producers throughout the country now widely use Klasmann because they are now more conscious that seeds cost money and should not be wasted because of low germination rates and poor seedling survival.

The world’s most ideal organic material for preparing seed-growing media is Sphagnum moss. It improves drainage and aeration in heavy soils while increasing moisture and nutrient retention in light ones. Sphagnum moss can absorb a water volume 10 to 20 times its weight and provide texture for strong root growth.

Sphagnum moss is the principal component of peat moss harvested from deposits called peat bogs found in cold climates worldwide, notably throughout Northern Europe, the U.S., and Canada, and in limited volumes in New Zealand, Indonesia and China. The Klasmann-Deilmann Company of Germany sources its raw material from peat bogs in Germany, Lithuania and Ireland, and processes it into over 1,000 formulations which it calls “recipes,” customizing these to suit the various soil and climatic conditions, crop requirements and other criteria relevant to each importing country.

Principe, Ordinario and their helpers learned in the tehcno-demo to sow 24 100-gram cans or 10,800 to 12,000 seeds (each can contains 450 to 500 seeds) of Condor Improved Trident in plastic seedling trays ﬁlled with Klasmann Peat Substrate. The high-quality growing medium enabled them to transplant seedlings at only about a week after sowing, assuring the successful transplanting of the seedlings, which depends on the young plants’ healthy root mass that enhances the absorption of moisture and nutrients for fast, vigorous growth.

Staggering transplanting in four sites at the Principe farm, Ordinario and the helpers planted the seedlings at distances of a meter between hills on the plots and 1.5 meters (m) between rows. The aggregate area that they planted to about 12,000 seedlings was 1.8 hectares.

A week after transplanting (WAT) the Condor Trident seedlings, Ordinario and his helpers applied dried chicken dung to the plots. A week later, following what they had learned in the techno-demo, the planters fertilized the young plants with Agrocote, the country’s ﬁrst controlled-release urea and potassium fertilizer that rationalizes granular fertilizer usage for bigger beneﬁts in terms of cost, labor, efﬁcacy and yield. Also marketed by ABC, Agrocote, through its controlled-release technology, rations nutrients on a daily basis for the plants to absorb and use as needed. The daily nutrient release for the plants lasts up to three months after the one-time application of Agrocote. This single fertilization application saves valuable time and effort that can be used for other important farm tasks.

When farmers apply urea and other granular fertilizers to their crops, what they apply immediately releases nutrients to the plants, whether those plants need the nutrients at that time or not. Much of the amount applied, especially during the plants’ early growth stage, is not needed, and is thus a complete waste. Moreover, ordinary granular fertilizers are vulnerable to volatilization and leaching and thus are also wasted.

The common practice by farmers of applying granular fertilizers days or even weeks after their previous application results in the plants starving and being deprived of nutrients during the periods of time between applications. This is at the time that the plants’ demand for nutrients increases as they grow.  Using Agrocote enables planters to spare their crops from such a critical situation that has a direct bearing on their plants’ survival, vigor, and yield.

The  efﬁciency of Agrocote is 80 to 90 percent compared to only 25-30% for urea. Leaching and volatilization, which are high in urea, are minimal in this new product. And the dosage rate for Agrocote is only one-third that for urea. In the longevity aspect, Agrocote basally applied nourishes the plants for up to 12 weeks, while both basal and side-dressed (after three weeks) urea last for only a week each.  No side-dressing is needed with Agrocote; one application is enough.

Principe’s workers applied 15 to 20 grams of Agrocote 38-0-0 in holes on the plots 10 centimeters away from each plant at two WAT. The vines started ﬂowering soon after four WAT. Before six WAT, the workers applied 16-20-0 fertilizer at the same distance from each plant. The fertilization regimen caused the vigorous growth, branching, and fruit development of the Condor Improved Trident vines.

Between seven and eight WAT, harvesting began, with the farmers and their neighbors marvelling at the many very green, smooth-skinned and big-sized fruits. Each vine produced an average 14.60 fruits with an average weight of more than 375 grams each, or a total of nearly 5.5 kilograms of fruit per vine on the average. At the conservative estimate of 11,400 vines that survived of the total that Principe planted, he harvested more than 62,000 kilos of Condor Trident Improved Ampalaya.

The Large Black Pig is Perfect for Free Range