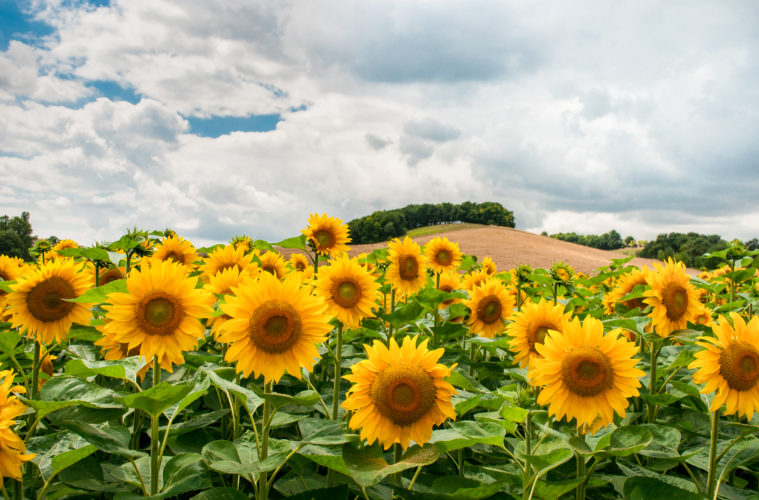 Explore the First-Ever ‘Sunflower Maze’ in the Philippines

Find out why folks should visit this maze, which is also its own unique form of agriculture.

If your concept of a “day farm” destination in the country is the sight of ordinary agri crops, grazing farm animals, and a glimpse of a simple and rustic way of life, well, you are probably off the mark.

This year’s edition of Allied Botanical Corporation’s (ABC’s) Open House may surprise you. The company recently opened its research farm in Barangay C. Lichauco, Tayug, Pangasinan to the public for the 2017 Annual Open House event which featured not only the country’s first-ever “Sunflower Maze,” but also the latest developments and technology in seed production to cater to the fast-growing interest in urban gardening.

AGRI-TOURISM DESTINATION – This year’s Open House, dubbed “ABC’s Take Off to Agritourism” is more festive and tourist-oriented, after the office of the Department of Tourism in Region 1 accredited the research and development (R&D) farm of ABC in the province of Pangasinan as a “Day Farm” agritourism destination.

This is welcome news for agriculture buffs, industry players, and adventure-seeking tourists who are looking for a place to make their travels to the northern part of the country more exciting, educational, and meaningful. There, ABC showcased the latest heat-tolerant tropical varieties of vegetables, herbs, and flowers which urban gardeners can use in their own backyards.

For the past 12 years, ABC has been conducting these annual open house festivals for its business partners and friends in the industry. It was only last year that the company decided to open its R&D farm to the general public after noting the growing interest in urban edible gardening.

FIRST IN THE PHILIPPINES, AND A GOOD STOPOVER – Aside from the various field day programs, visitors can enjoy exploring the unique 2,100-square-meter Sunflower Maze, said to be the first in the Philippines, and probably in Southeast Asia as well. But the sunflower maze is just part of the bigger showcase that Allied Botanical Corporation prepared for the public.

The 23-hectare research and development farm of ABC is a vast outdoor classroom where visitors, whether farmers or tourists, can see a showcase of around 500 different varieties of heat-tolerant vegetables, herbs, and annual potted plants. There is also a colorful collection of annual flowering plants and cut-flowers, all arranged in a beautifully landscaped garden.

The vegetable showcase is composed of ABC’s various crop groups, like the Fruit Fiesta—a collection of different melons and watermelons in all shapes, colors, and sizes; the Chilli Explosion—featuring varieties from the hottest chilli to the sweetest bell pepper; the “Pinakbest” group; and Corn Republic, among many others.

The event, which ends this month, is a good destination for those travelling with their kids because it has been designed to be an educational and fun-filled way to introduce children to the wonderful world of agriculture. It is hoped that the open house will motivate the younger generation to learn how to plant vegetables and to gain knowledge on how crops grow at the farm then reach their dining tables.

Another interesting feature is the 8,000-square-meter area that is planted with the different varieties of melon and watermelon.

There are scheduled “Pick-andPay” activities, during which visitors and health-conscious individuals can harvest for themselves different varieties of fruits and leafy vegetables.

EASILY ACCESSIBLE – It’s less than a 30-minute drive from the Carmen Exit of TPLEX (TarlacPangasinan-La Union Expressway) in Pangasinan to reach the event. Those taking public transportation can reach the area through passenger buses, jeepneys, and even tricycles from the same TPLEX exit.

Its 23-hectare research and development farm breeds and screens most of its new vegetable varieties. After years of careful and rigid testing, these are eventually released for distribution to farmers and agriculture enthusiasts all over the country. This is part of ABC’s commitment to Filipino farmers and consumers; it also fulfills its objective of educating the youth about agriculture and protecting the environment. ABC prides itself on its rigid selection and breeding of tropical vegetables to create a better world by “bringing out the best in seeds.”