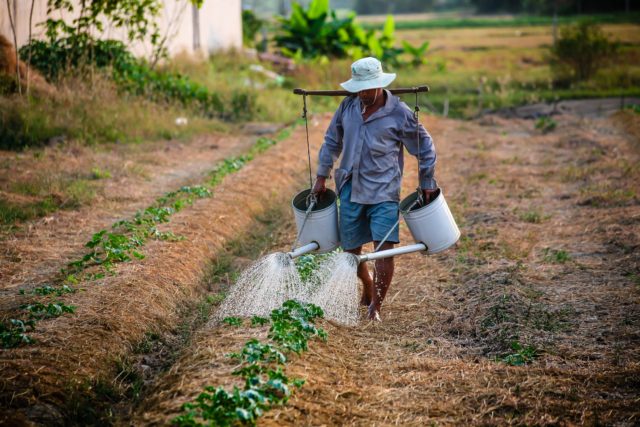 Senator Villar pushes for agriculture in the country.

Senator Cynthia Villar believes that the key to food security is keeping family farms profitable and sustainable. To achieve that, the farmers should consider farming as an honest-to-goodness business. They should be entrepreneurs who also derive income from non-traditional sources like agritourism.

Senator Villar, who was guest of honor at the recent invitational opening of the agritourism event at the Allied Botanical R&D farm in Tayug, Pangasinan, emphasized that farmers can derive additional income from farm tourism. In her inspirational message, the lady senator stressed that it is the small family farms that can feed the world. And to sustain the family farms, they should become profitable enterprises so that the farmers’ children will choose to stay and become agri entrepreneurs.

She congratulated the management of Allied Botanical for having come up with their Amazing Sunflower Maze, which is now attracting thousands of visitors.

The sunflower maze is a 2,000 square meter land planted to some 8,000 sunflower plants which are now in bloom and will continue to be in bloom up to the end of April. After the main flower becomes spent, new flowers will come out from sprouts that arise from the bottom. The flowers will be smaller but are more numerous.

Going through the maze can be an unforgettable experience. One can get lost because there are dead ends. Along the way, there are secret gardens that include the Pallet Garden, where a couple of pallets are laid on the ground and the spaces between the wooden slats are planted to flowering plants. There are also recycled boots that are planted to colorful flowers. And an old bicycle is used as prop to hold more plants in recycled containers.

In another secret garden, old steel garden chairs serve as resting place for lovers of nature. And then there is the Comfort Zone, a garden of flowering plants that are planted in old toilet bowls. They will certainly amuse people and add a light touch.

After exiting from the sunflower maze, the visitors proceed to the fruiting and leafy vegetables that are being showcased for their prolificacy and adaptability to the tropical lowland conditions. The very fruitful gourd or upo always elicits “ohs” and “wows” among the visitors because of their heavy fruiting.

Oh, the tomatoes are so colorful because they are heavily laden with ripe fruits that come in brilliant reds, oranges, and yellows. They come in different sizes, too: the little cherry tomatoes, the cocktail varieties, and the salad types.

Of course, new techniques of growing the highvalue crops are also showcased at the R&D farm. For instance, there is a simple hydroponics system which is on the ground. Then there is an interesting way of planting eight different varieties of leafy vegetables for salad, coming in greens and other colors.

The many varieties of peppers are really fascinating. Some are so low growing yet heavily laden with fruits. These include the sweet Palermo, the hot Pinatubo chilli, the super hot Jalapeño, and the Pangsigang Best.

The different corn varieties for boiling are also very interesting. There are two types of pure purple varieties. One is a waxy type, meaning its soft kernels are semi-glutinous. The other is a sweet corn type. There is a technique in cooking the ears so that they don’t lose their dark color. This is done by steaming. When it is boiled the usual way, the kernels will lose their dark pigment and look washed out.

At the R&D farm, one can learn about the different ways of controlling insect pests. Among these is the use of the solar insect trap. This is powered by a solar panel. At night, the bulbs are switched on and the insects are attracted to the light where they are trapped.

There is blue and a yellow roller trap installed in the field. The yellow roller trap attracts white flies and other moths. On the other hand, the blue one attracts the thrips which also do a lot of damage to crops. The insects get stuck to them and there is no poisonous chemical involved.

There are many other useful ideas you will see at the agritourism event. Better attend and you will not regret making the trip there. There is still time left since the event will end on April 30.

Explore the First-Ever ‘Sunflower Maze’ in the Philippines

Oberhasli Goat: Proving to be an Exceptional Milker