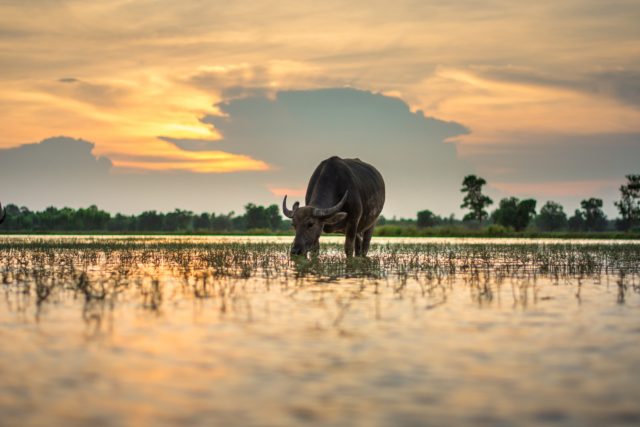 The Philippines is only 1 percent sufficient in milk. This means 99 percent of dairy products being consumed in the country are imported.

One of the Department of Agriculture’s (DA) major programs is its milk feeding program. “But where will we get [the milk for this] if we are only 1 percent sufficient?” asked Dr. Eufrocina DP. Atabay of the DA’s Philippine Carabao Center (PCC) during her talk on “The Role of Assisted Reproduction in Dairy Industry Development” at the recent S&T Agri-Biotech Forum.

“What aggravates this situation is that [the] … dairy herd population [for] both … buffalo and cattle [is low]. Another problem is that the animals are being left unproductive for a long time and this will result [in] low reproduction efficiency and economic loss,” added Dr. Atabay, who specializes in reproductive biotechnology.

Hence, the need for the development of the dairy industry is obvious, especially with the increasing human population both on a global and national scale. This suggests an increasing demand for food sufficiency and agricultural sustainability.

At the core of this mission is the PCC, through its program, “The Role of Assisted Reproduction in Dairy Industry Development.” Specifically, Dr. Atabay and her team’s objective is to increase dairy herd buildup in the Philippines in terms of quantity and genetic quality.

One of the technologies that Dr. Atabay and her team employ for dairy herd buildup is artificial insemination (AI). This process of simulated reproduction involves extracting sperm from a quality male buffalo and injecting the sperm into the reproductive tract of a female buffalo.

PCC’s AI services are done nationwide by trained private village-based AI technicians as well as technicians of LGUs (local government units), among others. AI is used to breed animals with higher productivity for both milk and meat by harnessing select animals’ excellent genetic material.

Two months after AI, the team checks for the presence of a fetus inside the carabao’s womb. The team also uses a pregnancy test on the animal to determine if the breeding was successful “…so we can detect non-pregnancy at the soonest time possible,” said Dr. Atabay. This helps prevent situations in which animals that can be productive are left unproductive for too long. This scenario (the unproductivity of animals for extended periods), according to Dr. Atabay, will be costly for farmers and breeders.

Another technology for enhanced genetic improvement for better quality carabaos is embryo transfer. The scientists collect quality embryos from one female buffalo for transfer to another female buffalo. The actual transfer is undertaken using AI as well.

They also do in vitro fertilization, or the incubation of the sperm and egg in a petri dish. After this, they do further cultures then perform the embryo transfer. Sometimes, the group induces the buffalo to produce more eggs in order to produce more embryos; this in turn leads to the production of more offspring. Excess embryos are preserved for future use.

“So, there are many ways of producing the embryo,” said Dr. Atabay.

Some of these processes are aided by ultrasound technology, such as in ovum pick-up, a process in which scientists collect immature egg cells from a superior carabao via aspiration with the help of ultrasound.

“As we employ these technologies, we are ensuring the sustainability of the production of our local dairy animals so we can avoid the importation of live animals, [and in the process] avoid the [introduction through] importation of some diseases…for a sustainable and globally competitive dairy industry,” Dr. Atabay concluded.