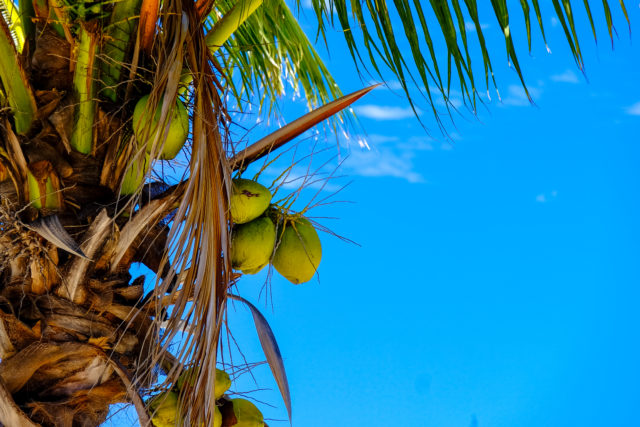 Jerry Taray will tell you that it is so. He and his wife, the former Jocelyn Taliño of Carmen, North Cotabato, are the owners of the TreeLife coconut plantation that is the biggest producer of organic coco sugar and coco syrup in the country today. Their products are exported mainly to Europe and other developed countries.

Here’s how Jerry explains it. The fruiting coconut tree produces an average of 8 mature nuts per month. That’s 96 nuts in one year. These 96 nuts translate into 21 kilos of copra, which fetches an average of ₱15 per kilo or a total of ₱320 per tree. One-third of this usually goes to the harvester as his share.

On the other hand, here’s the case of the coconut tree for coco sugar production. As per their experience in their own farm in Carmen which is a certiﬁed organic coconut farm, one fruiting coconut tree can produce 480 liters of sap per year. The sap is collected from unopened ﬂowers and cooked into coconut sugar.

Eight liters of coconut sap yield one kilo of coco sugar when cooked. This is worth ₱200 per kilo at current prices, and is even higher in the retail market. Thus, the 480 liters of sap per tree per year becomes 60 kilos of coco sugar worth ₱12,000. Assuming that even if the net proﬁt from coco sugar production were only 10 percent (that’s very, very conservative), the proﬁt from one tree would still be ₱1,200. And since there are 140 trees per hectare, the net proﬁt per hectare would be ₱168,000. If the proﬁt is 20 percent, you can easily ﬁgure it out.

Jerry and Jocelyn Taray with coco syrup and coco sugar for export.

Can one tree produce 480 liters per year? One tree really can produce that much sap. Here’s how. One or two ﬂowers are tapped 24 hours every day in one tree. And the yield is 1.5 to 2.5 liters per day. That’s an average of 2 liters daily. Even if you assume that there are only 240 days of tapping in one year, that’s already 480 liters. Actually, there are more than 240 days of tapping per year.

Right now, the Tarays have 8,000 fruiting dwarf coconut trees that are tappable. But as of now, they are only tapping 1,500 of these trees. They are eyeing to tap more but they have to invest more in cooking facilities which could involve millions of pesos. The processing plant should be situated right in the plantation because the tapped sap should be processed within ﬁve hours of collection.

PET PROJECT – The Tarays have other farming projects like oil palm and rubber trees but their pet project is coco sugar production. They have a total area of 60 hectares (50 leased from the DENR) planted to 8,000 Takunan and Katigan varieties that are dwarf. These are now fruiting, ranging from 7 to 10 years old.

The dwarf varieties start fruiting as early as three years from planting. These are highly suitable for sap production because the tappers don’t have to climb tall trees to gather the sap. These varieties will eventually grow tall but not as tall as the ordinary varieties. Coco sugar production provides employment to more people than when the coconut is intended for copra production. To produce the current amount of eight tons of coco sugar per month, there are 25 to 30 tappers grouped into teams. At the end of the day, each person can collect 90 to 120 liters of sap for which he is paid ₱4.50 per liter. Which means a take home pay of ₱405 to ₱540 per day.

The women workers who do the cooking number 10 to 15 per shift of 6 to 8 hours. They are paid per kilo that they cook, averaging a take-home pay of ₱250 to ₱350 per day. That’s way above the minimum daily wage in Carmen town.

THE START – How come the Tarays went into coco sugar production? It was not really their intention. It happened that Jerry took over 50 hectares of brush-land that was originally leased to another person by the Department of Environment and Natural Resources (DENR) under its Green Philippines Program. The lease is very minimal because the intention was for the once-logged-over areas to be planted to something of value. That started in 2004 after the couple returned to the Philippines from their employment in Canada. Jerry said he could not endure the extreme cold so he and his wife returned to the Philippines to engage in farming and business.

ﬁnal drying of the coco sugar by steaming

Well, at that time, the Philippine Coconut Authority in Aroman, North Cotabato, had thousands of dwarf coconut seedlings that were originally intended for distribution to farmers. But the farmers refused to take the seedlings even if they were available at giveaway prices because they believed the plants would just perish under the hot sun.

So the manager of the station convinced Jerry to buy the seedlings on a buy-one-take-one basis. There was a time when some were given away free. From 2004 to 2007, Jerry was able to plant the whole 50 hectares from the DENR and another 10 hectares in another place.

Jerry, who ﬁnished a business course, did his own computations and found that there was very little money to be made in copra production. Fortunately, his friend from the Aroman station of the BPI offered to train him in coco sugar production. His wife Jocelyn also did a lot of research on anything to do with coconut food products. And so in 2012, they started producing coco sugar.

The next item on the agenda was to ﬁn a market for their products. Fortunately, they were invited by the United States Agency for International Development (USAID) to join a trade expo in Cebu where they displayed their organic coco sugar and syrup. Then it was followed by an observation trip to a food expo in Hong Kong sponsored by the Department of Agriculture. There, they met some of the international players in the import and export business. They were told that in order to be able to sell their products in Europe, these had to be certiﬁed as organic.

The certiﬁcation by CERES or Certiﬁcation of Environmental Standards GmbH, based in Europe, is not cheap but the Tarays were determined to export their products to foreign buyers. In the end, they had to spend ₱500,000 to get their organic certiﬁcation. That was the only way they could sell to the organic produce buyers.

With their certiﬁcation, they were able to jump-start their exports. The DA again helped them participate in the Biofach Food Expo in Nuremberg, Germany early in 2013 and their participation has been paying off. They were able to get an order of 13.6 tons from a buyer in Holland who continues to purchase from them.

Another buyer from the United Kingdom has been ordering 3 to 5 tons every other month from them. A buyer from Australia has been buying 3 tons every 4 to 5 months. A New Zealand buyer is also purchasing the same amount at about the same frequency. A consolidator is also sending their coco sugar to the United States.

Now they are starting to develop a distribution network in the Philippines. They believe there is a big market for coco sugar because it is a healthy food for people with health problems as well as people who are perfectly healthy.

Canada as Market for Local Fruits and Delicacies