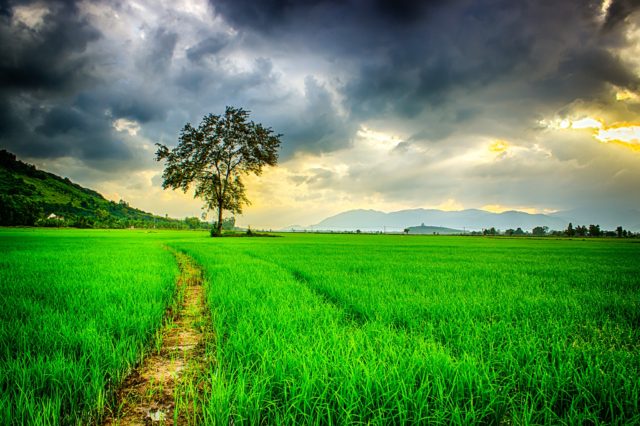 What a simple farmer gone through in a farm business to be a successful one.

Twelve years ago, Gerardo “Gerry” Esteban, 46, of Barangay Cuatro, Laur, Nueva Ecija, plied the streets of Metro Manila as a jeepney driver while taking up an electronic engineering course. However, he did not finish the course as he got married. As he was not a graduate, he struggled to make ends meet, especially after there was a new addition to his family.

Desperate for a better source of income, Gerry finally acceded to the suggestion of his aging father that he work on their farm instead of seeking employment in the city. He and his wife resettled in Gerry’s hometown of Laur and began to develop a 1-hectare farm. The farm was then under a 12-cavan per year leasehold contract.

Could a 1-hectare farm sustain a growing family? While he had his doubts from the start, Gerry nonetheless started forming definite plans and ideas on how to sustain the small piece of land.

During his initial years on the farm, Gerry learned that mono-cropping would not provide him with a sustainable income. While the farm was fully irrigated and could be planted with rice twice a year, the income from rice alone would not sustain his growing family. He then looked to diversified farming as a likely alternative.

With this in mind, he carefully planned the layout of the farm, setting aside half a hectare for rice farming. One fourth of the area was set aside for a vegetable garden; another fourth was set aside for livestock raising to accommodate his cattle fattening, swine raising, sheep raising, native chicken, and duck raising, and a small pond for tilapia, intended for local consumption. He started planting some 300 mango seedlings alongside the levees of the rice field.

While he attends training sessions and seminars, Gerry admits when interviewed that his main source of information and inspiration is still from Agriculture Monthly Magazine, of which he is a regular subscriber. He applies the agricultural technologies he learns from the articles to the letter.

Gerry Esteban demonstrates to farmer trainees how to prepare a mushroom bed in one of the farmers’ field school training conducted at his farm.

Gerry soon realized that the family’s decision to stay permanently at the farm was wise and could actually be rewarding. The family made it a point to start saving. With his savings from the farm, he soon acquired the adjoining properties from relatives and friends who either sold or leased them for a period of time. To date, he owns some five hectares. He has altered his farm layout and plans based on the expansion of his holdings.

Today, he has expanded the rice farm to three hectares. He attended a week-long seminar by PhilRice on rice seed production some years ago. But he abandoned seed production in favor of hybrid rice production. Gerry always makes it a point to stay abreast of local rice technologies so that he can improve his production.

When hybrid rice technology was introduced, he was the first to adopt it. Last year, for the first time, Gerry used a mechanical rice planter which reduced his labor costs. He divided his three hectare rice production site into two, allotting two hectares for hybrid rice and a hectare for inbred rice. During the wet season, however, the area is planted only to inbred rice.

1.2 hectares of onions are regularly intercropped with varieties of vegetables.

Last year, Gerry attained an average yield of 12 tons per hectare for the hybrid variety and nine tons from the inbred rice during the dry season cropping. This amounts to some ₱594,000 from the dry season crop of rice. During the wet season cropping, his average yield is about five tons per hectare or some 15 tons per season. At ₱18 per kilo, his gross income from rice alone during the wet season amounts to ₱270,000. Within two rice croppings, Gerry has grossed ₱864,000.

Gerry’s other main source of income comes from a 1.2 hectare onion farm. He usually harvests some three tons of fresh onion from this farm. His onion crop is placed in a cold storage facility in Tarlac. After about six to eight months, depending on the market demand for it, he withdraws his onions from storage and sells them at better prices. He usually sells the onions he stored for ₱60 per kilo.

The mango trees which he planted a decade ago are now bearing fruit. He himself sprays the fruit-bearing trees. Last year, he harvested nine tons of mangoes, which he sold for ₱190,000.

He has rented a 5-hectare farm at a nearby barangay for five straight years. He devoted the area to Bt corn and produces some 10 tons per hectare or 50 tons per season. At ₱12 per kilo, his gross income is ₱600,000.

His livestock also provides a substantial income for Gerry. He sells some 10 to 15 head of sheep yearly at R120 per kilo live weight. The average weight of his sheep is about 20 to 30 kilograms. He maintains some 50 heads of sheep his farm. He also raises native chickens, ducks, and pigs, which are sold whenever visitors and friends come over.

He regularly plants vegetables in a patch which he maintains the whole year round. He harvests tomatoes, peppers, string beans, lettuce, pechay, Chinese kangkong, and sweet potatoes from the vegetable patch.

Reminiscing on his life over a decade ago, and what he has attained through the years as a gentleman farmer since, he has come to realize that farming is really a lucrative career after all. With industry, diligence, dedication, and technology, no one goes hungry on the farm, says Gerry, who is the latest regional winner of the Rice Based Gawad Saka awards in Central Luzon.

Taguig City in Metro Manila is a Big Producer of Melons