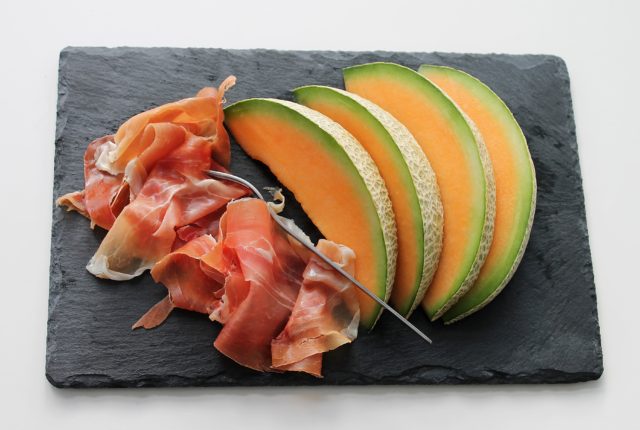 Discover how Taguig City became a devoted producer of melons.

by Tony A. Rodriguez

Dorry Fadriquela of Allied Botanical Corp. poses with native melons; behind her is the vast western half of the Taguig City melon area. In the distant background on the right are some of the skyscrapers of the Bonifacio Global City.

Agriculture is thus no longer a major industry in Taguig. In fact, according to Emelita Solis, who heads its City Agriculture Office, Taguig is not a beneficiary of the Department of Agriculture’s programs because it can no longer comply with the requisite of having at least 60 percent of its total land area devoted to agricultural activities.

It’s therefore a big surprise to know, as technologists of Allied Botanical Corporation (ABC) discovered several years ago, that in Taguig exists what’s most probably the country’s largest contiguous area that farmers plant to their single—albeit seasonal—crop: melon.

In the northeastern part of Taguig’s melon fields, a trader’s assistant sorts native melons prior to loading on a vehicle.

Near the city’s northeastern end, east of the C-6 Road that serves as part of Metro Manila’s eastern circumferential highway, are several hundred hectares of land that are mostly part of Barangay Sta. Ana. Bounded on the south by the Taguig River, a tributary of the Pasig, and cutting through Taguig’s northern half, the area’s eastern boundary is Laguna de Bay itself.

During the rainy months of the year when the lake floods the entire area, the farmers grow some rice and kangkong in the portions that are not severely inundated. Then, from December to January, they plant the crop that they harvest in April as what has become their main agri-produce.

“Our farmers have been growing melons here for about five decades now,” says Solis, who has been Taguig’s head agriculturist since 1996. “A good example is Reynaldo Cruz, who is the president of the Sitio Pulong Kendi Farmers Association, a group founded about 20 years ago and has in its ranks some 50 members. Because of melons, Cruz’s group is the most active member of the Taguig Farmers Association.”

“As a teenager, I helped my father in the three hectares that he tilled as tenant,” says Cruz. “He’s now 73 years old. My brother and I now work the land.”

The farmers plant native melon seeds that they save from their previous season’s crop. They sow the seeds in seedbeds and transplant seedlings 14 to 15 days after sowing. They plant three seedlings per hole 45 centimeters (cm) apart, fertilizing the vines with a total of four bags of urea and 14-1414 per hectare to supplement the organic matter in the silt deposited by floodwaters from Laguna de Bay in the rainy season.

Open wells about two meters deep that they dug a few meters apart throughout their fields enable the farmers to easily water their plants, as the wells are full until mid-February when the young vines begin flowering. By the time they harvest in April, the wells are nearly dry.

The farmers let all their vines grow and fruit, neither thinning the plants nor pruning them, and likewise letting all their fruits develop and mature. These practices and the use of their own seeds result in harvests of more and more small-sized melons rather than medium or big ones.

“We don’t mind the big number of small fruits that we pick because traders buy from us by the kaing regardless of size or weight,” says Cruz. “They pay us R750 per kaing. When yields are good, we harvest more than 500 kaing per hectare. A kaing weighs 35 kilos on the average. The traders bring our melons to Divisoria and other major Metro Manila markets, but we also sell to people in and around our barangay who retail the melons in their talipapa and roadside stands.

“ Solis says that the farmers can earn much more if they adopt new melon-production technology. “A component of one of the city government’s priority programs under mayor Lani Cayetano is enhancing livelihood in the agriculture and fisheries sectors,” she says. “The mayor has approved my proposal to have ABC help us produce hybrid melon varieties that give high yields and produce sweeter and higher-quality fruits that will fetch much better prices than what traders now pay for the native ones our farmers are producing.”

Solis asked ABC Area Sales manager Dorry Fadriquela to request the company’s technical services department to conduct techno-demos for the hybrid melons, the seeds of which it markets. ABC sent technologist Michael Castillo to Taguig with a variety whose fruits smell and taste like the native melons but whose vines grow more vigorously, are more prolific bearers, and thus give much higher yields because it’s a hybrid.

The variety that Castillo chose to show to the Taguig farmers is Fantasista F1, which Takii and Co. Ltd. of Japan developed and bred and which ABC distributes. The variety has lush, vigorous vines that are resistant to Downy Mildew, a common and widespread disease of cucurbits or plants of the Cucurbitaceae family, which includes squash, cucumber, watermelon, melon and cantaloupe. Fantasista vines are prolific bearers of fruits that are uniformly-shaped and of uniform size.

Solis gave seeds of Fantasista F1 from ABC to five farmers belonging to the Pulong Kendi Association, including its president, Cruz. They planted the seeds and cared for the vines the same way they grew their native variety, except Castillo had them plant only one seedling per hole instead of three.

They began picking the Japanese variety’s fruits in mid-April, just as their native melon harvests was beginning to peak. Castillo showed Solis, members of her staff, the farmers the qualities of the hybrid melon’s fruits, and lectured them on how growing Fantasista will improve their net income per hectare by as much as ₱120,000. Those who tasted the fruits said they were indeed sweeter and more fleshy. The fruits’ firm, bright-orange flesh surrounded a seed cavity much narrower than that of other melons, and their shipping quality was excellent.

Solis bought Fantasista fruits to bring to their local mayor and other city officials so that they could sample the Japanese melon. The farmers insisted they sell their products to her by their mode of disposing of their native melons: by the kaing. The city agriculturist told them that when they begin producing Fantasista on a commercial scale, they must sell it to the traders the way melon producers in Central Luzon and other melon-growing areas of the country do: by the kilogram, which will mean an increased income for them.