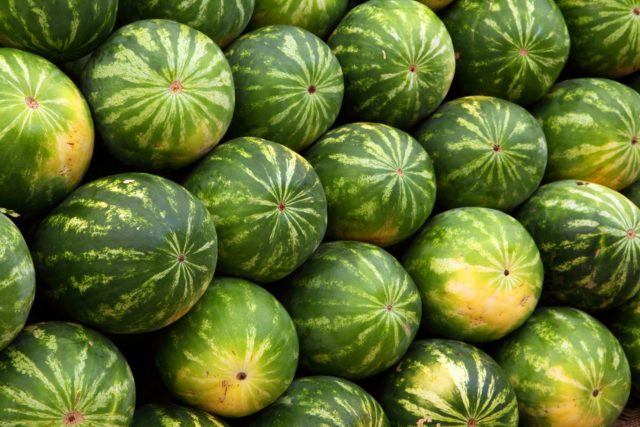 Getting to know how Bani, Pangasinan became the watermelon capital of the north.

Bani, Pangasinan has a way of promoting itself as the Watermelon Capital of the North. This is by holding its annual watermelon festival. Recently, the town held its 4th Pakwan Festival. The annual festival is also one way of promoting the town as a tourist destination.

One highlight of the event was the Farmers Agri Trade Fair, wherein the farmers were given the chance to display and sell their watermelons and other agricultural products. Many of them showcased the varieties they are really proud of.

Ardy Oineza of Brgy. San Simon displayed his two favorite varieties with big fruits. One is China Baby, a Charleston Grey type with a light green rind and bright red flesh. It is a big variety, with fruits averaging 10 to 12 kilos each. Some even weigh as heavy as 16 kilos. The fruit has a shelf life of 7 to 10 days and has good shipping quality.

Oineza’s other big-fruited watermelon is Factor, a Crimson sweet type with watercolor-like thick stripes and pink flesh, averaging 10 to 14 kilos per fruit. Factor has a long shelf life of 10 to 14 days and good shipping quality.

The other major highlight of the event was the Harvest Festival. For this, Known You Philippines and other seed companies supplying watermelon seeds were invited to put up their own demo farms to showcase their watermelon varieties. Aside from introducing their varieties, the harvest festival was also a means of disseminating the improved techniques of planting and managing the crop up to post-harvest and marketing operations.

Field tour of farmers and other participants in the municipality’s demo farm.

Known-You Philippines, which hosted the Farmers Harvest Festival, brought the participants to the company’s demo farm and showed them the different characteristics of the watermelon varieties planted there.

Other highlights of the 4th Pakwan Festival were a street dancing competition and a drum and lyre competition.

Jolly Calisaan of the Bani Pakwan Growers Association said he was overwhelmed by the success of the event, which gathered all their members who have been planting watermelon for more than a decade and who have been contributing to the trademark of Bani as the Watermelon Capital of the North.

Winning the War Against BCR in Papaya