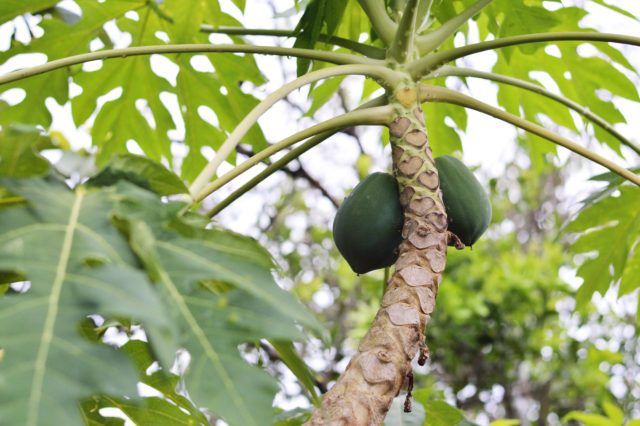 Learning the effects of bacterial crown rot to the growing papaya industry in the Philippines.

In the Philippines, papaya is commonly grown on small farms ranging from one to five hectares in area, with a productivity period of around three to four years. The Philippines produced an average of 16,000 metric tons of papaya from 2011 to 2015.

However, the looming effects of bacterial crown rot, or BCR, can cripple the growth of the papaya industry, particularly in South Cotabato and Bukidnon in Mindanao.

The plant’s leaves, flowers, and petioles will lose their vibrance as they fade and turn brown due to BCR.

A CRIPPLING DISEASE – BCR has already infiltrated the Philippine papaya industry. At its onset, it can spoil an entire papaya plantation, wiping out at least 50 percent of the trees. This can translate into millions of pesos worth of damages to the total papaya production.

This will create instability in the livelihoods of farmers and have adverse effects on food security. From a macro perspective, this could signal a reduction in the domestic supply of papaya or even a decline in the country’s export earnings from the commodity.

Bacterial crown rot, also called bacterial canker or bacterial decline, is one of the most important diseases of papaya in the Philippines. Once infected, a plant’s stem and other growing points will rot, wilt, and eventually collapse, while its leaves, flowers, and petioles lose their vibrance as they fade and brown. The stench from the rotting plant tissues linger in the infected area.

FIGHTING BCR – Recognizing the damage that BCR can bring about, a team of experts from the University of the Philippines Los Baños (UPLB) and the Davao National Crop Research, Development and Production Support Center (DNCRDPSC) are conducting a project called, “Integrated disease management strategies for the productive, profitable and sustainable production of high quality papaya fruit in the southern Philippines and Australia.”

They are working in collaboration with the Australian Centre for International Agricultural Research (ACIAR) and the Philippine Council for Agriculture, Aquatic and Natural Resources Research and Development of the Department of Science and Technology (PCAARRD-DOST).

The Papaya Integrated Disease Management (IDM) Project is part of the ACIAR-DOST-PCAARRD collaborative Horticulture Program, which focuses on selected fruits and vegetables to improve food security and the livelihoods of smallholder farmers.

In essence, the project team seeks to identify what causes the BCR and its survival, how it is transmitted, and how it can be controlled or managed. Information gathered through the project will be packaged as part of the IDM strategies.

The project team will work with Del Monte, Sumifru, and the Tupi Papaya Growers Association of South Cotabato for extension and dissemination of the knowledge and technologies developed.

Through the project, the species associated with BCR has been successfully identified—an important achievement since determining the causal organism of BCR is vital in disease diagnosis and in developing management practices.

Initial trials showed that the BCR pathogen is neither seed-borne nor soil transmissible, but red spider mites appear to transmit BCR to healthy plants after being exposed to infected ones.

Further trials will be conducted to confirm and supplement research on disease transmission.

The looming effects of BCR can cripple the growth of the papaya industry in the country.

PAPAYA SELECTION – The team is also screening papaya germplasm in the Philippines to find lines tolerant or resistant to BCR. From this study, it was observed that BCR-infected trees showed regrowth of the stem. This discovery will help identify papaya selections that are tolerant to BCR.

Field trials to develop Integrated Pest Management-based strategies to manage BCR will be implemented at the DNCRDPSC once environmental conditions become suitable for the tests.

Implementation of IDM strategies is expected to generate benefits other than preventing the spread of BCR. The management practices being developed will strengthen farmer-researcher partnerships as communication and trust are enhanced.

The conventional BCR management practice of applying copper-based fungicides poses health risks to farmers and contributes to soil, water, and air pollution; its potential harm to farmer health and the environment, coupled with its low effectiveness in managing BCR, calls for better alternatives to be developed through the project.

BCR MANAGEMENT STRATEGIES – The project envisions producing a management strategy that will reduce the overall impact of BCR disease by 40 percent through yield increase, cost reduction, and environmental sustainability. Revenues of smallholder papaya farmers are expected to rise as a result.

Ultimately, winning the BCR battle through integrated disease management is expected to improve food security and the livelihoods of the smallholder papaya farmers

Bani, Pangasinan is Watermelon Capital of the North