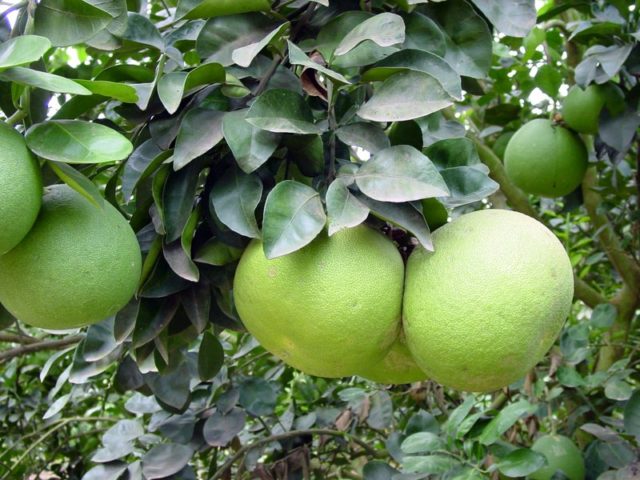 Knowing the reasons why you should grow pummelo?

The other week, a lady lawyer based in Manila approached us, asking what’s new in our nursery. She said she had already bought practically every variety that we have in our collection, albeit only a few of each.

Fruitful pummelo grown by Bannawag editor Cles Rambaud in front of his house.

At this point, we asked, what’s her purpose in developing her eight-hectare property in the north. Is it just as a hobby–in which case, she doesn’t care whether she makes money or not? Or is it being developed as a source of additional income? In other words, it is for profit.

If it is for profit, we told her, she should select one or two varieties that she can plant in big numbers so that she can produce a volume that will attract big buyers to go and buy her harvest.

We stressed that if she just plants a few trees of each kind, she will not be able to produce something that could be considered commercial. Bringing a few kilos of fruits to the market will be a waste of time and transport cost. The value of the product might not even be enough to pay for bringing the harvest to the market. And no big buyer will go to her to buy whatever she has on her farm.

And so what did we propose to her? We told her to consider planting the best varieties of pummelo for a number of good reasons. Pummelo is adapted to her place, as proven by some backyard plantings in the province. Compared with mango, pummelo has distinct advantages. In the first place, the good variety of pummelo commands a much higher price than mango. In supermarkets, it is not unusual to see good pummelo varieties being sold at ₱140 a kilo. Pummelo can be kept for a longer period because it does not spoil easily. It can be kept for one month under ambient temperature, for instance. In the case of mango, the fruit will keep for just a few days once it is ripe.

More trees can be planted with pummelo than mango. Pummelo can be planted eight meters apart whereas the latest recommendation for mango is 12 to 14 meters apart. Also, two harvests a year can be made from pummelo whereas with mango, one harvest per year is the norm. At the same time, there is no need to spray flower inducer on pummelo in order for it to bear fruit. In the case of mango, flower inducer is sprayed on the mature leaves to trigger flowering. And the mango flowers are sensitive to rain. If overtaken by shower or rain, the flowers will succumb to fungal infection, resulting in no fruit set.

Very important is to plant only the varieties with superior eating quality. These include the Magallanes (popularly called Davao), Nam Roi (Vietnam white), Vietnam Red, Bangkok Sweet, Florida, and Milo Mas from Malaysia. Fruitfly is a destructive pest in some places. To prevent fruitfly damage, pummelo fruits should be bagged with a cloth bag.

Pummelo can be grown not just as a commercial venture but also in the home garden for family consumption. One hobbyist who has a fruitful Vietnam pummelo he planted in a concrete plant box in front of his house is Cles Rambaud, editor of the Ilocano magazine Bannawag published by the Manila Bulletin.