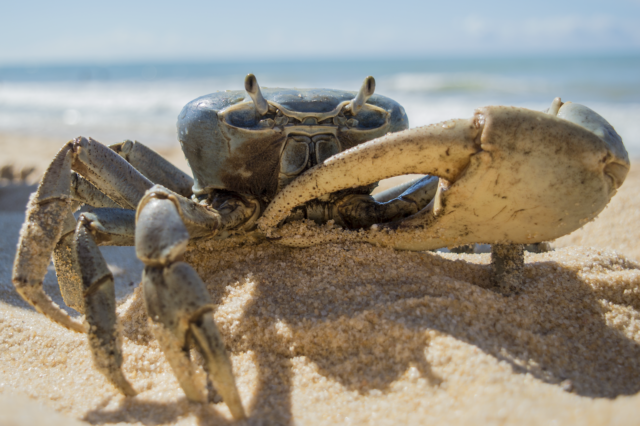 Looking through the improvements of nursery techniques and what’s new to soft-shell crab in the market.

Year-round production of soft-shell mud crab for the specialty high-end market is now possible, thanks to the improved hatchery and nursery techniques developed by scientists funded by the Department of Science and Technology.

The scientists are from the Southeast Asian Fisheries Development Center Aquaculture Department (SEAFDEC/AQD) and the University of the Philippines Visayas, both in Iloilo.

Soft-shell crabs are newly molted mud crabs that usually weigh from 90 grams to more than 100 grams each when marketed, and are considered a gourmet food. One piece may fetch ₱70 to ₱80 on the market. One way of cooking them is to steam the soft-shell mud crab and then deep-fry the same. Every part of the crisp deep-fried crab is eaten. Of course, chefs have other creative ways of preparing soft-shell crabs.

Soft-shell crab production is not new, but production has not been consistent because producers depend on crablets caught from the wild, and the supply of these is not reliable. Sometimes, crablets are not available.

Now, with the improved hatchery and nursery techniques, an adequate supply of crablets for soft-shell mud crab production is possible throughout the year, according to Dr. Emilia Quinitio, program leader of the mud crab research program. She is from SEAFDEC, and is one of the scientists involved in the production of juveniles for the production of soft-shell mud crabs. The others are Dr. Fe Estepa, also of SEAFDEC, and Prof. Jerome Genodepa of UP Visayas. A research program on mud crab diseases is handled by Dr. Edgar Amar.

SOFT-SHELL PRODUCTION – Commercially producing soft-shell mud crab can be a viable venture. Four mud crab species are listed as good for soft-shell production. The three mud crab species commonly found in the Philippines that can be used
for this purpose are Scylla serrata, also known as king crab (‘bulik’), Scylla olivacea or orange crab (‘pulaan’), and Scylla tranquebarica, or purple crab. The pulaan is smaller than the king crab and is preferred for soft-shell production. The king crab is preferred for full-size growing, in which the crabs attain weights of up to 500 grams each or more.

Dr. Quinitio is confident that enough crablets for soft-shell production can be produced in the hatchery to meet the requirements of farmers. In one egg-laying, one breeder crab alone, she said, can produce about 40,000 ‘instars’ (the very small, barely recognizable baby crabs). The instars are 23 days old. From the instar stage, they pass through the nursery stage for 6 to 8 weeks, during which they attain 3-4 centimeter (cm) carapace width. In another 6 weeks they will attain 60-80 grams in the grow-out pond. These are the ones placed in perforated plastic boxes, where they will molt or shed off their shells. After molting in the individual plastic boxes, the crabs increase in size by 30 to 40 percent.

In the three-year mud crab research program funded by the DOST, Dr. Quinitio’s focus was on hatchery management, while Dr. Estepa and Veronica Alava focused on nursery techniques. Prof. Jerome Genodepa, on the other hand, specializes in the grow-out aspect. The diseases component of the program is heandled by Dr. Edgar Amar of SEAFDEC/AQD.

The mud crab project is just one of three research projects funded through an ₱80 million grant from the Philippine Council for Agriculture, Aquaculture and Resources Research and Development (PCAARRD), an agency of the DOST. The two other research programs that started in 2012 involved shrimp and bangus.

IMPROVEMENTS – What are some of the improvements in mud crab technology achieved with the DOST funding?

The previous techniques have been refined, according to Dr. Quinitio, so that they are now more efficient in producing juveniles. One important improvement is in the nutrition of the brood stock as well as the juveniles. They have come up with formulated feeds so that there is less dependence on ‘trash fish’ for feeding the crabs.

Dr. Quinitio said that there are other SEAFDEC scientists who are involved in improving the diet of mud crab. They are Dra. Mae Catacutan and Relicardo Coloso, who have been studying ways to improve the composition and physical properties of the feed.

Another improvement is in the reduction of cannibalism among the crablets. The researchers have discovered ways to minimize cannibalism, one of which is by providing crab shelters in the tanks. They have also added certain ingredients to their diet that make the crabs less aggressive.

Scientists are studying many other aspects of mud crab culture, and production is expected to get even more efficient.

For more information, visit the PCAARRD.