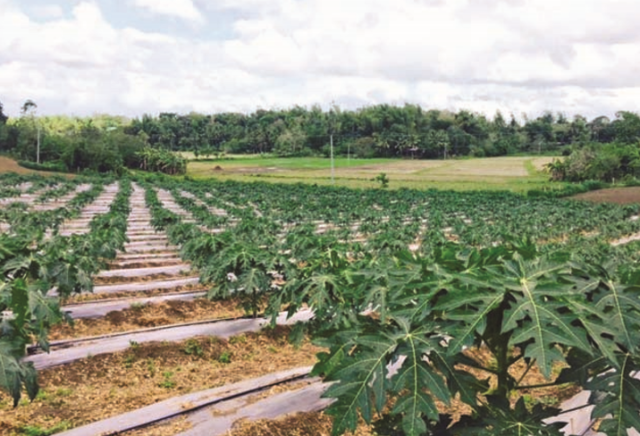 Learn how to turn an ordinary agri-farm into an agri-tourist destination.

In farming, you usually don’t hit the jackpot right away. You can commit mistakes. That’s all right. After all, you also learn from your mistakes. Knowing people who are in the know could save you from further mistakes. That’s what happened to Eddie Cañuto of Ephrathah Farm when he met Toto Barcelona of Harbest Agribusiness in 2008. The meeting turned losing farm operations into winning ones.

Eddie Cañuto strikes a victorious pose before his papaya trees.

Eddie Cañuto is a civil engineer who comes from the small town of Badiangan in Iloilo. He is a civil engineer who was successful in the construction business in Manila. In 2005, although the income from his construction business was great, he decided to sell all his stocks in the company so he could go back to his hometown to start Ephrathah Farm on 16 hectares of upland that the family inherited from their grandparents.

He planted bananas, which was a disaster, according to him, because disease devastated his plants. The plants could also have suffered from lack of water because bananas are sensitive to shortages of moisture in the soil. Then he went into hog raising. That was also a failure because the feeds were too expensive for him to make a profit.

It was good that in 2008, after three years of unprofitable farming, Eddie happened to meet Toto Barcelona of Harbest Agribusiness, who suggested that he try growing high-value crops. And Red Lady papaya was one of the suggested crops he should try growing.

Toto gave him the protocol on how to grow Red Lady. For a start, Eddie planted 300 seedlings. To his great satisfaction, he harvested a lot of fruits that he sold for ₱35 per kilo. In the two years that his 300 papaya trees remained productive, he estimates that he must have harvested about 120 kilos of ripe fruits per tree.

Since then, and up to this day, he has continued to plant Red Lady. In fact, he has come up with a system that enables him to supply four branches of SM Supermarket in Iloilo throughout the year. Every four months, he plants one hectare to the variety. At the time of our interview (early November 2016), Eddie was harvesting from 2,400 trees, and this enabled him to deliver 4,000 kilos a week to SM.

Because of the bright prospects on the farm, his eldest son Ed Roderick gave up his high-paying job in Manila to join his father. An MBA graduate from La Salle, he is now in charge of crop production.

In the meantime, while papaya was enjoying good business, Ephrathah Farm ventured into diversified operations. Aside from crops that now include salad greens grown organically, the farm developed into an agritourist destination which now boasts lodging and recreational facilities. It operates a restaurant and a special events center. It is the first and only agritourism destination in Iloilo accredited by the Department of Tourism.

Aside from crops, Ephrathah Farm is also into livestock and poultry. It is raising native pigs and produces thousands of quail eggs every day. And another product that excites Eddie is organic eggs of free-range native chickens. He says that he can sell the eggs at ₱15 apiece.

The whole family is involved in the operation of the farm. The only girl, Ainah, is in charge of the hotel and restaurant. On the other hand, the youngest son, Jonathan, is in charge of marketing. All the products that are delivered to their customers pass through him.

Eddie feels very happy because Ephrathah Farm is getting more and more visitors. Some go there just to observe the projects, for which each person is charged ₱50 as “disturbance fee.”

There are also those who go there to attend seminars on topics such as vermiculture and vegetable production. In this case, the fee is ₱100 per person.

One thing that makes Eddie feel very fulfilled is the fact that in his small town, his farm has created 76 permanent jobs for his town-mates in addition to those for the seasonal workers who are hired whenever there are occasions that the farm needs more manpower.