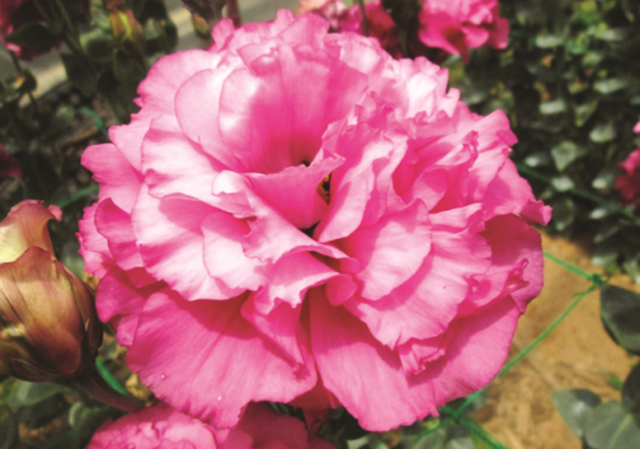 Farmers, florists, and vendors use the word “paper roses” to refer to Lisianthus or Eustoma because of its long shelf life.

A new color of paper roses, developed by Known You Seed Philippines Inc., was recently introduced to Benguet farmers. This is the Lisianthus Doris series, Rouge. Rouge is any kind of red or reddish-colored makeup that’s used for tinting a person’s cheeks. Also, a rouge or red color rushes up the cheeks whenever the person feels an intense emotion. According to vocabulary.com, the word “rouge” can also refer to the red color itself; the root of rouge is the Latin word “rubeus,” which means “red.”

Flor Galate of Atok, Benguet was among the first to try growing the new color. According to her fellow farmers, the white and the two-colored Lisianthus are the most common and safest colors to plant since there is a good and regular demand for these on the market. Thus, it was a risk for Galate to try out the new color.

She planted Rouge seeds in January 2017 and waited six months for them to bloom. The plant height ranged from 80 to 100 centimeters and flower size was between 8 to 10 centimeters in diameter. The flowers were very beautiful, with a thick layer of petals of different shades, from very light pink to rouge. Its flower buds were very much similar to those of a rose.

Galate and fellow grower Marlyn Atiwag believe that flower’s new color can send a lot of messages. Flowers are known for having their own language, with each type and color of bloom whispering its secrets to those who understand it. One stunning bouquet of this rouge-colored lisianthus can tell tales of love and devotion, even if the color of the flower is not as bright or as dramatic as people think red should be.

Whether their customers will or won’t like it, the two have high hopes for the new color, which they think will be a head turner. After all, for experienced florists, red or reddish-colored flowers are often used to convey respect, admiration, or devotion. Since rouge is the new red color for Lisianthus, it will be no surprise when a bouquet of rouge “paper roses” become the newest symbol for courtship; soon, it will be a symbol of love and romance.