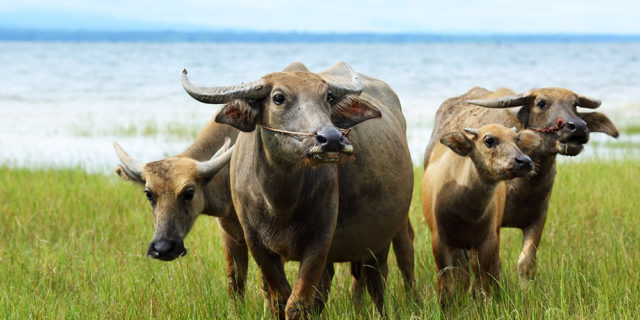 Get to know how Carabaos could give high profits to farmers for dairy purposes in the Philippines.

When we think of carabaos, we think of farmers using them to plow fields. The Philippine Carabao Center has been trying to expand on this notion ever since it was established as a research project in 1983, continuing when it became a government agency under the Department of Agriculture in 1996, until today. One of its programs is the breeding of water buffalo for dairy purposes.

Carabaos are milked once a day, while the calves get the rest. Calves are weaned after three months, whereupon their mothers can be milked twice a day.

Not everyone can be a carabao dairy farmer. The PCC has strict guidelines when it comes to the care of the livestock, as well as in the testing of the final product. “We give them training as needed in animal production, animal health, good milking practices, and milk quality,” Dr. Saludes says. “We make sure that they will produce the best quality, the cleanest…We don’t accept it if it is not up to our standards.”

One dairy carabao can produce between seven to eight liters for younger carabaos to four to six liters for older animals per milking. The PCC buys the milk at ₱50 per liter. An average of five liters a day means ₱250 daily per animal. A carabao needs about a hectare of grazing area, though this can be safely raised to five carabaos per hectare, half the number of the current maximum of ten.

The animals under the program tend to be free-range and mostly organic by culture more than intention. Most are tied to a length of long rope to offer them ample grazing area, though their food is also supplemented by feed and more grass via the cut-and-carry method, where the farmer cuts the grass and feeds it to their herd, sort of like healthy fast food.

TO MARKET, TO MARKET – Carabao milk has a lot of potential. It’s got almost double the nutrients of cow’s milk and almost twice the amount of fat—7-8% to the cow’s 3-4%—making it creamier. Aside from drinking milk, it’s also great for butter, cheese, ice cream, and baked goods.

The PCC-LB teamed up with Richard Cavosora to help market their products. Cavosora markets through his company Happy Carabao, targeting institutions which will buy wholesale instead of individuals for retail.

Clients include Gino’s Brick Oven Pizza (where it’s used to make burrata and mozzarella), Papa Didi’s ice cream, organic retailer Holy Carabao, and Villa Escudero resort. There are also artisanal products for sale on Happy Carabao’s own Facebook page. “We’ve penetrated [the market for] these consumers which are on the higher end and towards really upper middle class markets which not a lot of people have been able to do,” he says.

There are challenges, of course. “The sad part is, millennial consumers are not familiar with white cheese…Some people would know pan de sal and kesong puti, but most don’t,” Cavosora says.

Fortunately, with the rising popularity of heritage cuisine, it’s become easier for carabao dairy to enter the local market. “There’s a sweetness and a certain thickness to carabao milk because of the fat content,” Cavosora says. “We really want to stress that carabao dairy products [are] premium ones worth the higher price point.”

CASE STUDY: MAGDALENA, LAGUNA – Cavosora works with about 40-45 carabao dairy farmers from Magdalena, Laguna. It’s the only remaining impact zone of the original seven that the PCC tried to cultivate in the area. “The milk…has to be delivered to the processing center in two (to) three hours…we test it when we pick it up, then we test it again when it’s brought to the processing center. (There’s) alcohol testing for bacteria and aesthetic testing— odor, appearance, and taste—and grading…That’s what sets you apart when you get into the PCC-supported program,” Cavosora says.

Cavosora acknowledges that Magdalena is a special case, but believes that its success can be replicated. “This is a sustainable model. We’re not crowding more than 20 carabaos in any one place because of the environmental impact…And you’re not subject to the vagaries of typhoons.”

Ultimately, the PCC has more than the paying consumer in mind. “We need to have a good study to back up a national policy that will support (a) dairy program, one of which will be milk feeding or milk (given with) lunch or snack(s) in elementary school. Not only will it save our children from malnutrition, it will also be a market for our farmers,” Dr. Saludes says. “We’re hoping that we will be sustainable all the way, from grass to glass.”