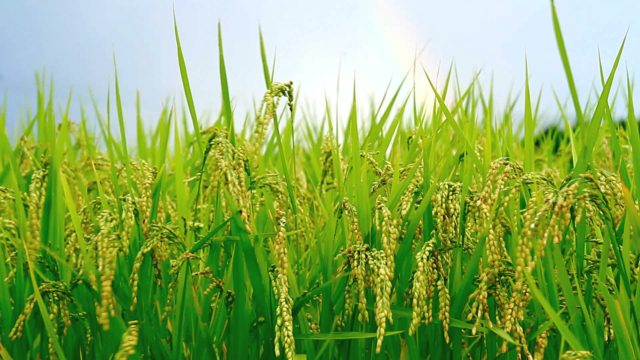 A Tondo-born electrical engineer who was an overseas Filipino worker (OFW) for two decades in Saudi Arabia and Japan is now a successful businessman with a 36-hectare hybrid rice farm.

Having been raised in a relatively crowded barangay of Manila, Tondo, Danilo Bolos, 58, never really knew anything about farming as a kid. “I’m not a farmer’s son,” he said. But after he married Glenda Jacinto, who is from Cabanatuan City, he was enticed to plant palay when he “…saw my wife’s cousins from Sta. Rosa, Nueva Ecija thrive in their livelihood from farming. I never really dreamt [of being] rich…I just wanted to have three hectares of land where I [could] plant and a bahay kubo (wooden hut) where I could enjoy a simple life,” he said.

Initially, he grew registered inbred seeds, which were then the highest yielding type of rice prior to 2000, when there were no hybrid rice varieties in the market. He bought foundation seeds from Philrice (Philippine Rice Research Institute) and grew those seeds for his own family’s use on a three hectare plot which he owned. For twenty years, the plot was always planted with the inbred seeds.

He was content with his earnings until he was introduced to a Department of Agriculture (DA) program that taught farmers to grow hybrid rice seeds. Bolos was challenged, and vowed to to take farming more seriously, attending many seminars given by the government on hybrid rice farming. He soon realized that farming couldn’t just be a hobby for him. “… [It] should be studied very seriously and must be considered as a fulltime job.”

This was when he decided to plant SL-8, a hybrid variety. Bolos was told that “…it was disease-prone, and the rice spoils fast…[and that palay produced from] hybrid seeds…sold [for] lower [on] the market by ₱1 per kilo compared to [what was produced from] other seeds.”

Despite the criticisms, Bolos found a big payoff in using hybrids: they yielded much more at 200 cavans per hectare. So when he got the chance to take another three hectares of land as collateral for a loan from him, he devoted the entire mortgaged land to growing the hybrid SL-8H. That began to give him the income boost he had never dreamt of. Now, he grows mostly SL-8H on 36 hectares, particularly during the dry season.

In the rainy season, he devotes as much as 10 hectares to hybrids in lands near his sight so he can constantly monitor them.

SHARING THE BOUNTY – Since Bolos now enjoys the fruits of his risk-taking and persistence in growing SL-8H, he has also taken the effort to reach out to other farmers who have yet to benefit from hybrid seeds. As founding chairman of the federation of irrigators associations STAR Capalay (Sta. Rosa, Cabanatuan, Palayan federation of Irrigation Association or IA), he helps 42 other farmer-leaders and presidents of IAs farmers needing assistance in growing rice.

One form of assistance is in effect an endorsement of a person as a genuine farmer-member of STAR Capalay. Through this membership, farmers may borrow money through the Department of Agriculture (DA) – Land Bank of the Philippines’ loan program, “Sikat Saka.” The program lends ₱40,000 per hectare to those growing crops using inbred seeds and ₱50,000 per hectare for those growing with hybrid seeds, and usually loans farmers up to ₱150,000 per season.

Bolos has become a model for other farmers in trying new hybrid varieties that may give higher yields owing to new benefits discovered by research, such as better disease resistance. During the last rainy season, he tried SL-12H in one of his fields as a demonstration of a transplanted hybrid. That gave him a good yield of 254 cavans.

He has mechanized his farm with a tractor and harvester. As a farmer-leader, the DA gifted him with a transplanter. Bolos knows that one objection to mechanization is that some farm help will lose their jobs as machines take over their work. “I try to tap them to take on important jobs like cleaning up irrigation canals during the dry season. We need to have deeper irrigation canals to avoid flooding during the wet season,” he said.

As chairman of his IA federation, his financial compensation comes in the form of an occasional fertilizer grant from the government when calamities come. Bolos doesn’t mind that he doesn’t get paid for leading the IA. But perhaps his service to the community is a win-win situation for him as he is always first to benefit from government programs when calamities arise as he’s always first in the list of authentic farmers. There are other benefits to his success; he has been able to send two children to college, and both are currently taking up law.

In terms of income, a diligent farmer may earn a net income in the millions of pesos if he is determined to pursue hybrid rice farming, Bolos attests. (Growth Publishing for SL AGritech)

Mechanization is the Way to go in Making Silage