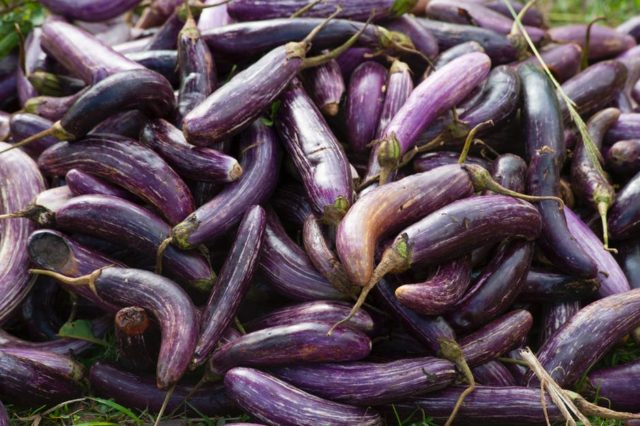 Ratooning is a method that involves pruning the plants back to several inches above the soil line to encourage new growth with reinvigorated flowering and pod production.

Results of the study showed that application of Amino Plus Foliar Fertilizer, either through foliar spraying or soil drenching that supplemented the vermicompost, induced flowering within 18 days after ratooning or cutting of the matured (unproductive) eggplants.

Ratooned mature eggplants fertilized with vermicompost and supplemented with Amino Plus foliar fertilizer – through different methods and rates of applications – produced viable results.

The results clearly indicated that the simultaneous flowering of ratooned eggplants, which was significantly earlier than those plants under the control method, was due to the additional nutrients contributed by Amino Plus that was supplemented to the vermicompost which is applied to the experimental plants.

PROCEDURE – A single factor experiment with five treatments and three replications arranged in Randomized Complete Block Design (RCBD) was used in the study. A total area of 62 square meters previously planted with eggplant was used. The area was divided into five rows of 15.5-meter length with one meter distance in between rows.

Each row was further subdivided into three rows of 4.5 meters length with one meter distance between rows to serve as blocks. Each row consists of 10 experimental plants with 50 cm planting distance between hills.

RATOONING – Seven-month-old eggplants were used in the study. They were pruned to about 20 centimeters (cm) from the soil base using a pruning shear.

After pruning the experimental plants, they were randomly arranged into 15 plots, where each plot has 10 ratooned eggplants, and each plot was assigned different treatments.

An F1 eggplant variety was used in the study, which is a strong and vigorous hybrid that is high-yielding and produces fruits which are long, smooth, and deep glossy purple in color.

NUTRIENT MANAGEMENT – Right after pruning, each experimental plot with 10 ratooned eggplants was applied with 13.5 kilograms of vermicompost, computed from a recommended rate.

This form of organic fertilizer was incorporated into the plant by hoeing during the hilling up, and after two weeks from pruning, Amino Plus Foliar Fertilizer was supplemented to the vermicompost by foliar spraying and soil drenching methods, respectively.

Succeeding applications of Amino Plus following the methods and rates of application were done every seven days for the three-month production period of ratooned eggplant.

MANAGEMENT – After incorporating vermicompost into the soil, watering was done first to provide moisture to the soil.

This also facilitated the decomposition of vermicompost to release the nutrients present for absorption of the developing ratooned eggplant.

No chemical spraying was performed during the study. Occurrence of pests and plant diseases was regularly monitored in the experimental area. The soil around the plants was cultivated to provide aeration and to control weeds.

Likewise, weeds that grow in between the rows of plants were regularly removed – either by hand pulling or by hoeing.

The simultaneous flowering of ratooned eggplants, which was significantly earlier than that of plants in the control group, was due to the additional nutrients.

HARVESTING – When the fruits reached the length of 20 to 25 centimeters, they were harvested. Harvesting was done early in the morning or late in the afternoon to prevent the fruits from water stress.

The harvested fruits were then sorted to separate the marketable from the non-marketable fruits.

Harvesting of the fruits was done every five days during the three-month production period.

Comparison showed that ratooned eggplants fertilized with vermicompost and supplemented with Amino Plus, either by foliar spraying or soil drenching, were significantly higher than the control method.

The results clearly indicated that the simultaneous flowering of ratooned eggplants, which was significantly earlier than those plants under the control method, was due to the additional nutrients contributed by Amino Plus that was supplemented to the vermicompost that was applied to the experimental plants.

Obviously, early production of fruits was observed in all the ratooned eggplants with Amino Plus supplementation to vermicompost.

The early fruiting obtained from the ratooned plants which were fertilized with vermicompost and supplemented with Amino Plus might be due to the additional macronutrients provided by the foliar fertilizer, particularly NPK and other micronutrients which resulted to proper growth of the plants and early development of fruits.

The significantly longer fruits obtained from the ratooned eggplantscould be attributed to the combined effect of vermicompost and Amino Plus Foliar Fertilizer which provided a sufficient amount of nutrients for the growth and development of the fruits of eggplant.

The microbial activities in the soil resulted in more nutrients absorbed by the plants, which resulted to significant higher yield from the ratooned eggplants fertilized with Amino Plus Foliar Fertilizer.