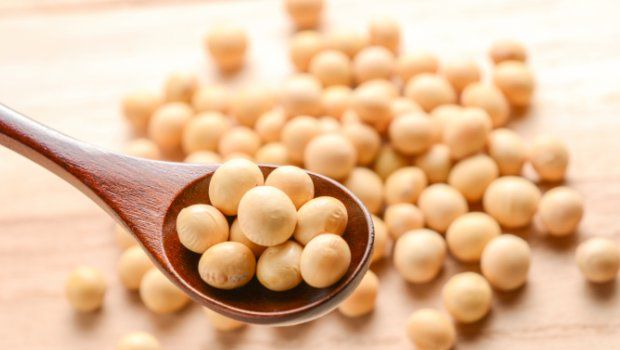 A man shares what he gone through and all the avenues to be successful in the soya industry.

He and his wife Mary Ann had a rough road to travel before they were able to establish their business as soya cultivators and soybean processors. In September 2013, they started their KKK project with a modest amount of capital after completing a training session initiated by PhilMech. “KKK” stands for the names of their three children, Kyla, Kyle, and Kevin.

The couple now has a stable source of raw materials from their own farm in Mexico, Pampanga. Layson’s farm organically produces about 120 sacks of soybeans per cropping season—enough to supply the needs of their KKK venture. In addition, their KKK venture was also able to generate modest employment opportunities for several workers. Enterprising individuals have also benefited by selling the soya products in their respective areas.

Why soy?: When asked as to why he is pursuing his soya production advocacy by teaching others techniques for production and processing, Layson says that soya milk has the same amount of protein as cow’s milk, plus it can substitute for animal protein and other sources of dietary fiber, vitamins, and minerals. But unlike cow’s milk, soya milk has little saturated fat and no cholesterol.

He adds that soya milk contains no lactose, which makes it a good milk alternative for those who are lactose-intolerant. Soybean is also a good source of protein, fiber, calcium, lecithin, Omega-3, potassium, zinc, Vitamins C, B1, A, and E, and other health giving properties.

Sharing knowledge, and an advocacy: According to Layson, he has been regularly conducting livelihood seminars for free at his residence in Paco, Manila every Friday. He says that through the series of seminars, he shares invaluable techniques on how to cultivate soya organically, from land preparation, sowing, fertilization, weeding, and caring for the plants up to harvesting.

After he discusses his techniques, Layson also shares how he processes soybeans into delectable and nutritious products, like soya milk, soya coffee, soya ice candy, and other related products. An estimated 90 percent of the country’s soybean requirements are imported, and only about 10 percent is produced locally. He believes that if soybeans can be produced locally and organically, it can be bought at more affordable prices compared to the imported product.

The free seminars are his way of helping promote the local soya industry. As part of this advocacy and a way of sharing his blessings—as he says he owes his success to God—he hopes to “… encourage other farmers and would-be farmers to venture into soya production and processing.”

He also wants to share “… what I have learned from the experts coming from the different government agencies like the Philippine Center for Postharvest Development and Mechanization (PhilMech), Central Luzon State University, and [the] Bureau of Agricultural Research (BAR), which is under the Department of Agriculture.”

Layson also said that without the timely assistance of PhilMech, he and his wife would not have the equipment they need to produce their nutritious products. “PhilMech trained me, and even lent the necessary equipment for me to produce soya milk.”

Those who want to participate in Layson’s free livelihood seminars, conducted at No. 1406 Sto. Sepulcro Street, Paco, Manila, from 9 a.m. to 12 noon every Friday may get in touch with him through mobile number 0917.867.5197.