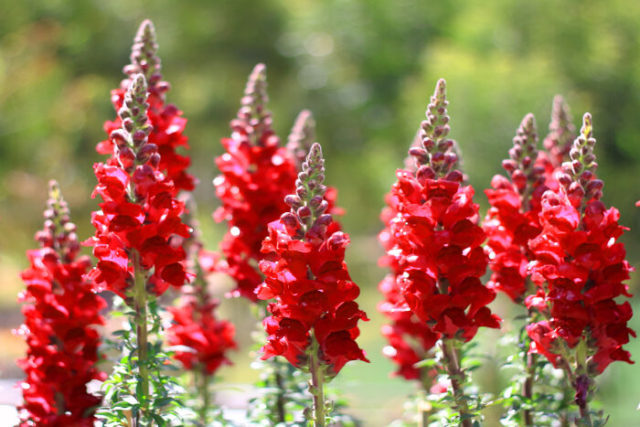 Know how the new tested snapdragon varieties are easy to grow flowers in Benguet, Philippines.

Farmers in Benguet have been planting Snapdragons in their greenhouses for a very long time. These are considered “great flowers” due to their uniqueness and ability to stand out in an arrangement. Florists like to incorporate snapdragons into bouquets because they are quite beautiful and extremely colorful, so they will really stand out.

Finally, they are considered to be “extremely easy to grow.”

Virginia Canol with the lush and colorful Snapdragons grown inside a greenhouse in Benguet.

However, the provenance of the varieties grown locally are unknown to many farmers since these come from many sources: a relative residing in the USA; a financier who gave them seeds so they could try new colors; other farmers who happen to have excess seeds who sell these to others; seed dealers; or even the seed pods grown in their first year. If they’re lucky, the Snapdragons may even self-sow.

Snapdragons are also called “Dog’s Mouth,” “Calf’s Mouth,” “Lion’s Mouth,” or “Toad’s Mouth.” How did such charming flowers wind up with such ungracious names? Snapdragons have tall spikes of brightly colored flowers that bloom profusely in cooler weather. Most are intensely colored and are real standouts. Snapdragon flowers start blooming at the bottom of the stalk and work their way up, making for a long period of bloom. Web sources state that its Latin name, Antirrhinum, means “like a snout” and refers to the seedpods’ resemblance to a calf’s nose.

The leaves of Snapdragons alternate and are arranged in a spiral around the stem. The flowers come in just about every shade, except true blue. Some are vibrant bold tones; some are soft pastels; and some are subtly shaded bi-colors. Snapdragons are tender perennials but in most areas, they are commonly grown as annuals. They are at their best in cool weather but once the temperature heats up, they may stop blooming altogether. Planting them in partial shade and keeping them well watered will help them make it through the summer.

However, snapdragons are most often started indoors 8-10 weeks before transplanting. Snapdragon seeds need light to germinate. When seedlings have developed about 6 true leaves, pinch the top of the stem off, to encourage branching and a fuller plant.

There are tall varieties and dwarf varieties and just about everything in between. Those by Known You Seed Philippines are tall ones measuring an average of 30-48 inches and form dense, strong stem plants with a very long flower stalks.

The company continually comes out with new snapdragon series. The Isabelle series are vigorous, beautiful flowers with strong stems. It comes in shades of white, pink, and rose. The Potomac series boast uniformly vigorous, strong stems and long spikes, good for cutflowers. It comes in shades of yellow, pink, rose, white, early white, and ivory white.

Enriquetta Depayso was among the first farmer cooperators of Known You Seed Philippines who grew Snapdragons successfully. She was overwhelmed by the result when she used the new varieties; their spiky, bright colored flower stakes make a beautiful centerpiece when arranged with other flowers. According to her, the yellow varieties are the easiest to blend into a mixed border and work nicely with other flowers. The strong stem and beautiful flowers are great filler plants for containers, baskets, and tucked into walls. Snapdragons like neutral soil pH, between 6.2 and 7.0.

As short-lived plants, Snapdragons are not heavy feeders, but adding organic matter will help keep them healthy and blooming. Snapdragons are affected by few pests or diseases, though rust and other fungal diseases can be a problem, especially during wet seasons. That is why most of Snapdragon growers in Benguet plant them inside greenhouse.

Virginia Canol was another successful Known You Seed Philippines cooperator who grew different colors at the same time. She said that Snapdragons are always a favorite at the Dangwa flower market.

According to Internet sources (listed below), Snapdragons have several meanings. • Snapdragons can make persons carrying them seem to be fascinating and cordial.

• For many florists, it is said that snapdragons represent graciousness.

• When given, the snapdragon presents the perfect picture of formal appreciation for kind hospitality.

• In bridal bouquets, the snapdragon may represent a wish for a fortunate and blessed marriage.