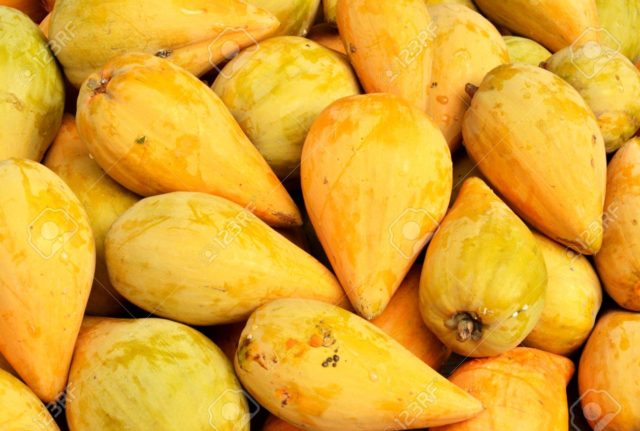 The talk of the town among fruit aficionados in Davao City is a mutant Tiessa that was entered in the fruit competition at the Kadayawan garden show that ran through the month of August.

This is a Tiessa that sports leaves and fruits that are both variegated (yellow and green). The mutant tree, owned by Rosalyn Dorado, a nursery woman, won first prize in the Fruit Trees category.

The first prize winner received a modest cash prize and a blue ribbon, but what could be much more rewarding is the possibility of making more money by multiplying the fruit tree. A friend of ours who is a collector of rare plants who sells his propagations as a sideline intimated that he would gladly pay ₱30,000 for the five-year-old tree that is grown in a container.

We ourselves believe that an investment of ₱30,000 can easily be recovered from just a few propagations of the winning plant. Many plant lovers will tell you that rare plants, especially the one-of-a-kind variety, can fetch a fortune.

The usual strategy of rare plant owners is to multiply their plant in big numbers before releasing the same in the market. This is very important, especially if the species is easy to multiply.

In the case of the variegated Tiessa, it can’t be multiplied very fast. Just the same, the owner should take her time in releasing it. Maybe, she has to propagate at least a hundred plants and then grow some into bigger specimens before selling any propagation. If there are insistent buyers, she could dictate the price that the insistent buyer can bear.

We believe that the variegated Tiessa will not be available in big numbers for some time. That’s because seedlings from the seed might not be variegated, just like with the more common variegated chico whose seeds don’t produce variegated plants.

As far as Rosalyn Dorado is concerned, she does not know of any other variegated Tiessa in existence. She said that she bought the seedling from her aunt for ₱150 when it was small and struggling. She took care of it and she was lucky the tree bore fruit for the first time in time for the competition of the Kadayawan garden show.

What is she going to do with her winning variegated Tiessa? Definitely, she will keep it for a while and find out how she can best multiply it.