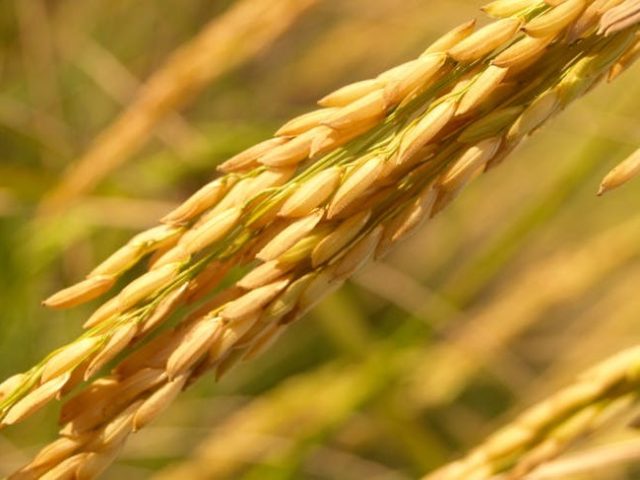 What farmers thought was an ordinary bug turned out to be a destructive pest that could reduce their rice yields by up to 30 percent.

Early this year, farmers and technicians in Maragusan, Compostela Valley noted the presence of the Rice Grain Bug (RGB), which at first glance appeared to be a tiny species of praying mantis or black ant.

The discoloration of the leaves and grains, which is seen as a sign of nutrient deficiency, is often followed by unfilled or empty grains, noted entomologist Mayflor Parcon of the Regional Rice Crop Protection Center (RCPC). The RCPC is one of the operating sections under the regional office of the Department of Agriculture (DA) in the Davao region. “When we received [reports] of RGB infestation, the RCPC team conducted the validation and confirmed that the sighted pest was indeed…RGB,” she said.

The International Rice Research Institute (IRRI) in its Rice Knowledge Bank says, “RGB damage rice by sucking out the contents of developing grains from pre-flowering spikelets to soft dough stage resulting [in] unfilled or empty grains and discoloration…Immature and adult rice grain bugs both feed on rice grains.”

THE BUG’S LIFE – Dr. Gerardo Estoy, Jr. of the Philippine Rice Research Institute (PhilRice) based in Agusan del Norte says RGBs are small and fast moving insects with an ant-like appearance and a size of approximately 0.6 – 0.9 cm from thorax to the abdomen—more or less the size of a rice grain.

“Female RGB [lay] their eggs singly; [these are] whitish or transparent in color…then [these turn] reddish to brown upon hatching. [A] newly emerged adult is light green to orange, while [a] fully developed adult [turns from] light brown to black in color,” says Dr. Estoy. He adds that it can only fly short distances, “…and when disturbed or alarmed, hides among leaves, panicles, stubbles, and crevices…They can be seen walking or crawling, then [they] climb up and [go] down repeatedly from one rice [stubble] to another. It usually appears when the temperature becomes hotter, usually from 9 a.m. to 4 p.m., and [they can] be hardly found during [the] cool times of the day.”

If compared to an ordinary rice bug, the RGB’s first pair of legs or femur is enlarged and can drill hard seeds. It also has a piercing-sucking mouth part which is used to penetrate the seed coat to get at the nutritious content within. These two distinct characteristics enable them to attack rice from the flowering to the “milky” stage, which results in empty grains during harvest.

RGBs can be found in all rice environments but they are more common in rainfed and upland rice. Extensive weedy areas near rice fields, wild grasses near canals, and staggered rice planting are among the factors that contribute to its high population. “That is why we are encouraging farmers to adopt synchronous farming to [help] minimize, if not eliminate its population,” Parcon says.

The symptoms of infestation can be confused with the damage caused by nutrient deficiency or flower thrips. To confirm an RGB infestation, farmers can check for the presence of the insect’s oval, shiny, and reddish brown eggs along the midrib of the leaf. Slender and brown-green nymphs and adults feeding on the endosperm of rice grains can also be seen, and there is its offensive smell.

“Newly threshed RGB-infested grain [is] moldy and odorous, [and]…when cooked, has a bitter taste. The bug could also be a carrier of Aspergillus flavus, a fungus that produces aflatoxin that is hazardous to health,” Parcon says, stressing that RBG-damaged grains serve as entry point for the fungus that turns into a secondary pest.

MANAGEMENT AND CONTROL – Parcon says land preparation is crucial in controlling the spread of the bug. “[RGBs lay eggs] under the soil, and intensive plowing exposes their eggs to the sun, causing [these] to…[spoil, thus arresting] the insect’s growth. To preserve standing crops, especially those in the vegetative stage, farmers are advised to flood or soak the field for at least 10 hours to…spoil the eggs so [these cannot] hatch.”

Synchronous planting, in which rice grows and develops at the same rate in a community, should be observed as it helps minimize the spread of pest damage. “Synchronous planting can help avoid [the] overlapping of [incidences] of insect population and disease occurrence. Harvesting at the same would enable farmers to observe the same fallow period (leaving the field idle for 30 days), which breaks [the] pest cycle and [destroys] its hosts,” Parcon added.

The DA-RCPC in the region, she says, is encouraging rice farmers to apply biological control agents such as green fungus or Metarihizium anisoplae, and white fungus or Beauveria bassian, which are available at their center. Other beneficial insects such as wasps and spiders can also help as they attack rice bugs or rice bug eggs. “Pesticide application should be the last option as indiscriminate insecticide use disrupts biological control and [may result in] pest resurgence.”

DA-RCPC training of LGU technicians and rice farmers has been conducted across the region. An information campaign on the management of RGB has also intensified as “awareness is the key to control the infestation,” Parcon says.

Clarifying that the RGB infestation is still at a manageable stage and that there is no cause for alarm just yet, Parcon says constant monitoring in the field should be conducted so that proper management and control can be observed.

Fishpens Have Enhanced The Fisheries of Laguna de Bay

Canned Chevon As OTOP of Echague