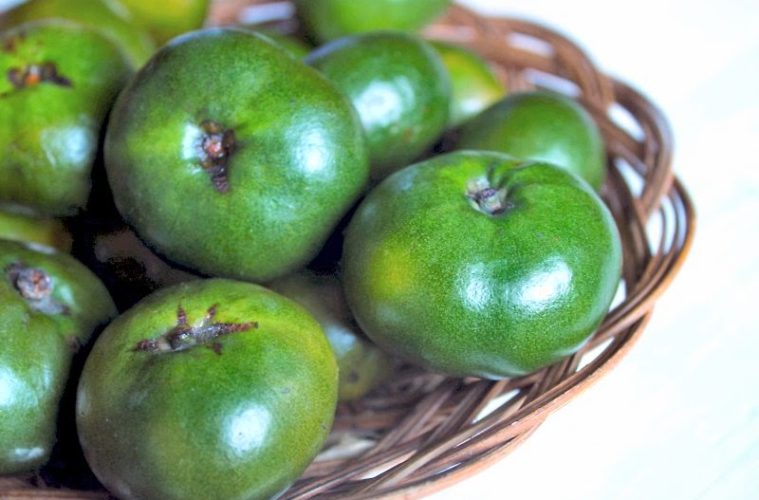 Iloilo City—Batuan, long a favorite sour fruit in the Visayas, may be useful in preventing diabetes.

Leann Patrice A. Ganzon, 16, and Anne Nicole Occeña, 15, both in Grade 10 in a Special Science Class at Iloilo National High School, looked at the therapeutic potential of batuan (Garcinia binucao) in preventing type 2 diabetes mellitus.

Batuan powder made into ready-to-use tea; honey is added to alleviate its sourness.

While it is a long way from the road to pharmaceutical testing, Ganzon and Occeña’s work may be the start of something big. Their study, “Garcinia binucao Fruit and Leaf: Potent Phytochemicals-Mediated Antioxidant, α-Amylase and α-Glucosidase Enzyme Inhibitions,” was judged the best in Western Visayas for Student Creative Research for High School. The award was given during the Regional Inventions Contest and Exhibits organized by the Technology Application and Promotion Institute, Department of Science and Technology.

Ganzon and Occeña—who plan to study medicine in college—went as far as to spend a month and a half of the summer of 2016 at the Food and Nutrition Research Institute or FNRI in Taguig, Metro Manila, to refine their analyses of batuan characteristics. Ganzon’s late greatgrandmother had part of both her legs amputated due to the disease. It so happened that Occeña’s family had a batuan tree in their backyard. “We thought of batuan as a means [of] preventing type 2 diabetes,” said Ganzon, the lead researcher.

The study also sought to determine the phytochemical content or biologically active compounds of batuan. At the same time, it looked at how the fruit’s antioxidant properties counter the production of free radicals that damage cells. It also examined the fruit’s α-glucosidase or alpha-glucosidase inhibition action, similar to those found in anti-diabetic drugs used for type 2 diabetes.

Ganzon and Occeña have produced batuan powder and put this in sachets to make ready-to-use tea. There is just a hint of sourness; batuan tea tastes good when honey (or sugar) is added.

The way it’s going, batuan may join the long list of herbal remedies made into tea—with a twist. Unlike other herbal medicines that rely mainly on testimonials, Ganzon and Occeña may have the scientific evidence to back up their claim.

Batuan (pronounced bat-wan) is an evergreen tree whose fruit is common in Southeast Asia, abundant particularly in the low altitude forests of the Philippines and Vietnam. In the Visayas, it is used as a souring agent for many local food recipes such as fish and pork sinigang and paksiw.

Because it is not cultivated, batuan fruits are collected from the wild. Its development into a pharmaceutical may reverse what was seen to be its declining stocks as forests are logged for shifting cultivation.

ABOUT ThE DISEASE – Type 2 diabetes mellitus is a long-term disorder that is characterized by high blood sugar levels. In 2013, about 5.4 percent of Filipinos had type 2 diabetes, according to the 8th National Nutrition Survey of the FNRI.

Type 2 is the most common type of diabetes, a lifelong disease that affects how the body processes glucose, a kind of sugar, in the blood. It affects the production of insulin, a hormone produced by the pancreas to turn sugar (glucose) from carbohydrates into energy. Insulin stabilizes blood sugar levels so that they are neither too high (hyperglycemia) nor too low (hypoglycemia).