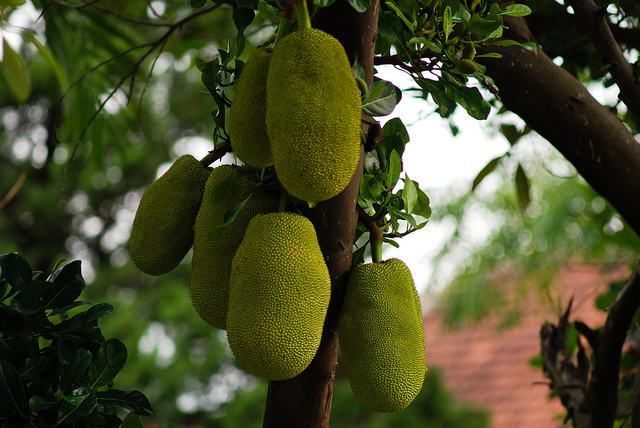 A farmer, with 8 hectares planted to jackfruit, was complaining to Dr. Jose Bacusmo—then president of the Visayas State University (VSU)—that there was no market for an abundant harvest.

The Department of Agriculture (DA) was promoting jackfruit while VSU had abaca as a flagship commodity. “We thought perhaps we could do something about it,” Dr. Bacusmo recalled, adding that the research and development (R&D) seed for jackfruit was soon planted. “The hardest part is backward integration, finding enough supply. R&D was relatively easy. Because there was little demand, we thought the supply was allyear round. It became apparent [it was] seasonal.”

The seasonality and the right variety were crucial, he told Agriculture Magazine. Farmers had to wait for the National Seed Industry Council to approve the commercial planting of the EVIARC Sweet No. 1 variety. EVIARC stands for the Eastern Visayas Integrated Agricultural Research Center which, together with VSU scientists, led jackfruit R&D supported by the DA and the Philippine Council for Agriculture, Aquatic and Natural Resources Research and Development (PCAARRD).

A SWEET CROP – EVIARC Sweet No. 1, which fruits in three years, is claimed to be the world’s sweetest jackfruit, based on a rating of 25.15 degrees Brix, the international standard for the sugar content of a solution dissolved in water—in this case the dissolved sugar content of jackfruit.

It is considered appropriate for addressing the high demand for processed jackfruit because of its distinct sweetness, moderate latex, and thick, highly edible meat that forms almost half (44.58 percent) of the fruit.

In August, a processing center for vacuum-fried jackfruit opened in Baybay, Leyte. The technology was transferred by VSU’s Department of Food Science and Technology (DFST) and PCAARRD to the Baybay local government, represented by Mayor Carmen Loreto Cari. Because of the demand for its fresh fruits and processed products, EVIARC Sweet is being promoted for commercial scale production through the DA’s Plant Now, Pay Later program, which is payable within five years.

The processing center produces 150 packs of vacuum-fried EVIARC Sweet sold at 75 each. Thirty packs are produced from seven kilograms of raw materials. “Farms have been developed, income improved,” said Mora Abarquez, the municipal coordinator at the processing center.

The city government has built a R1.5 million infrastructure, complete with a Pasalubong Center outlet, in a one-hectare plot; it also bought the R850,000 vacuum fryers developed by the Industrial Technology Development Institute (ITDI) of the Department of Science and Technology (DOST). The plant layout and technical training were provided by the ITDI and Engineer John Glenn D. Ocana, head of the Leyte Provincial Science and Technology Center.

The fruit has displayed versatility for the commercial market, says Dr. Reynaldo V. Ebora, Executive Director of the PCAARRD, pointing to its high domestic demand and export potential.

TECHNOLOGIES FOR RAW MATERIALS, CROP CULTIVATION, AND PROCESSING – Seedlings were first cultivated for farmers to plant so that a supply would be available when demand increased and the market developed.

The DA’s Regional Field Office 8 for Eastern Visayas has standardized raw materials for jackfruit processing. Through its “plant now, pay later” program, farmers acquired planting materials, and these are payable in five years. The program helped start a massive planting of EVIARC Sweet in the region.

A package of applicable technology has been developed for EVIARC Sweet and two other new varieties. They range from pruning the main trunk two years from planting to pesticide application. The average number of fruits harvested, the fruit weight, and the number of marketable fruits increased, compared to untreated trees.

VSU’s DFST has several processing technologies ready for adoption, including those for tarts, pastillas, purees, and jams. “The idea is for zero waste, to use all the parts of the jackfruit,” said Dr. Roberta D. Lauzon of VSU-DFST, College of Agriculture and Food Science. “What it means is that everything is converted into high value products.”

To diversity and maximize means to increase value and increase farmers’ income, Dr. Lauzon said in an interview. Because all parts of the fruit have nutritional value, these have been made into burger patties, prepared in “gata,” jam, fried strips, flavored coffee, wine and other beverages, vacuum fried seeds, cupcakes, noodles, pickled in brine, pastilles, jackfruit and beans in tomato sauce (like pork and beans), chicharon-like seeds, and a sandwich spread mixed with 60 percent tuna.

Based on evaluations for three successive fruiting years, three new jackfruit varieties, including EVIARC Sweet, bear fruit as early as 2.5 years after a grafted seedling is planted. The tree prefers abundant, evenly distributed rainfall throughout the year and an elevation of 800 meters above sea level. They grow best in deep, well-drained sand or clay loam soil.

To get a well-formed canopy, the main trunk is pruned when a jackfruit tree is two years old. It is cut 1.5 meters from the ground, leaving three to four big branches to develop a multiple stem. Fertilizers are recommended.

Pest management is essential to control fruit fly and fruit borer infestations. Pesticide is sprayed to prevent attacks from the fruit fly while bagging with a nylon sack or plastic cellophane that also keeps borers away from the fruits. Because of the pesticide application, the average number of fruits harvested, the fruit weight, and the number of marketable fruits increased compared to untreated trees.

Pruning, burning, and disposing of affected branches far from the farm prevents the onset of a major disease that causes the top part of the tree to turn orange or yellow and to fall off. This results in substantial production losses.

Data based on two cropping seasons indicate that using the package of applicable technology increased sales of marketable fruits by up to 2,811 percent for a total of ₱312,642. Fruits are considered marketable when they are whole, undamaged, and blemish-free. The production cost might have increased because of the package of technologies, yet the net incomes of those who have planted jackfruit increased by 2,577 percent, from ₱9,166 when the new varieties were planted the conventional way, to ₱245,454 when using the recommended management practices.

The Importance Of School Feeding Programs