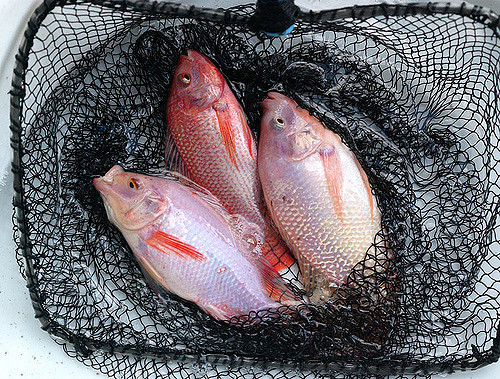 The fifth Tilapia Congress was recently held in San Fernando City, Pampanga with the theme: “Levelling Up the Philippine Tilapia Value Chain to Global Competitiveness.”

Organized by the Bureau of Fisheries and Aquatic Resources (BFAR) of the Department of Agriculture, it aimed to “enhance the production, post-harvest and marketing of tilapia for a sustainable, profitable and globally competitive industry, and to update the sector on current trends by featuring technical reports on recent aqua-farming technologies and best practices to improve and prepare the tilapia value chain for the world market.”

Featured in the Congress were various tilapia product exhibits; technical sessions on the production, trade, marketing, and intensive hatchery of tilapia; and a “Talk Show on Inspiring Stories of Philippine Tilapia Industry Champions” to empower aquafarmers, cooperatives, and associations. The oath-taking of the elected officers of the newlyorganized Philippine Tilapia Stakeholders’ Association, Inc. (PhilTilapia) was also held.

The CAVAFIFMPC is a group of 39 tilapia hatchery and grow-out operators with an aggregate area of 21 hectares of hatchery ponds for fingerling production and 31 hectares of ponds for growout. Established in 2012, the cooperative is a major producer of fingerlings for cage and pond growers in Region 2 and the Cordillera Autonomous Region (CAR).

It has donated fingerlings for the dispersal programs of local government unit of San Mateo, Isabela for small pond growers and stocking in communal water bodies, and provided free advisory services on the design, layout and management of pond, cage, and hatchery operations.

The TLAAI in Batangas is an association of fish cage operators and other stakeholders in Taal Lake founded in 2009 “to act in a unified action in protecting the ecological balance of the lake and to represent the stakeholders who depend on the lake for their livelihoods.” The association is a member of the Protected Area Management Board (PAMB), which is mandated by law to preserve and protect the Taal Volcano Protected Landscape.

With the occurrence of “fish kills” in Taal Lake due to the proliferation of fish cages causing poor water quality, the number of cages was reduced from 14,000 to 6,000 in 2012. Aside from fully complying with the rules and regulations for sustainable aquaculture, the association also has its own projects for environmental protection and community development.

The SMBL was organized in 2014 by the fisherfolk of Barangay Popol in the Municipality of Buluan in Maguindanao with the assistance of the BFAR-ARMM (Autonomous Region in Muslim Mindanao). Its initial 20 members operated 300 hectares of tilapia fishpens in Buluan Lake, the third largest lake in Mindanao with an area of 6,134 hectares.

Today, with its 42 members, the group is producing as much as 18 tons/day of Nile tilapia with 1-2 pieces per kilogram during the peak period and 7 tons/day during the lean period, using only the natural food in the lake and without artificial feeding. The fish harvest is marketed in nearby municipalities and as far as Cagayan de Oro City. Tilapia farming has significantly contributed to the development of the municipality.

Pampanga contributes 36% of the total tilapia production in the country and is considered the “Tilapia Capital of the Philippines.” In 2016, our country ranked sixth in the world in farmed tilapia production with 259,000 metric tons having a value of R18.32 billion.