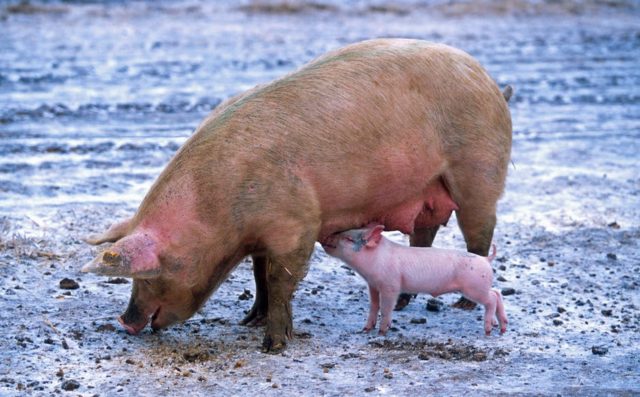 Learn what are the advantages and disadvantages of Probiotics on Pigs and the factors of considering its diet for better health.

Pig producers would like to keep their costs down by supplementing livestock feed with dried distiller’s grains with solubles (DDGS) and other agricultural coproducts generated from bio-fuel production. But adding hard-to-digest fiber to livestock diets also increases the production of manure—never a good thing, especially when it threatens to exceed on-farm storage capacities. So Agricultural Research Service microbiologist Cherie Ziemer and others conducted the first published investigation of using bacteria as a probiotic to increase fiber fermentation rates and reduce manure output in pigs consuming high-fiber diets.

A high-fber diet can also serve as a source of energy if the fiber can be broken
down during digestion. Other researchers have investigated using carbohydrase enzyme supplements to break down dietary fiber and release sugars that can then be absorbed in the small intestine. Bacterial fermentation of these same fbers, on the other hand, takes place in the large intestine and results in the production of smallchain fatty acids that pigs use to meet metabolic energy demands.

Ziemer and animal scientist Brian Kerr, who works with Ziemer in the ARS
Agroecosystem Management Research Unit in Ames, Iowa, fed the pigs in their study either a typical diet or a high-fber diet. The high-fber diets contained 10 percent soybean hulls and 20 percent corn DDGS. The pigs were also given one of three bacterial supplements the scientists developed from different strains of Bacteroides ovatus, which had been obtained from human fecal samples and cultured in fber-rich media. The three bacterial supplements were designated Bacterium B, C, and D.

But pigs that received the bacterial supplement designated as Bacterium B
reduced their manure output by 20 percent. These pigs also gained more weight and had better blood cholesterol and glucose levels— both indications of an improved energy status—than pigs not given probiotics.

Ziemer believes the probiotic could improve pig performance and reduce manure volumes, which in turn would increase producer profts and reduce the environmental footprint of pork production. She thinks the bacterium could be fed in a liquid supplement or possibly freeze-dried and mixed with feed.

This work was supported by a grant from the Defense Advanced Research Projects Agency as part of the Intestinal Fortitude Program, which investigates how to help people obtain more energy from fiber. Results were published in the Journal of Animal Science in 2012, and ARS has submitted a patent application for Bacterium B. (Reprinted from the March 2014 issue of Agricultural Research magazine)