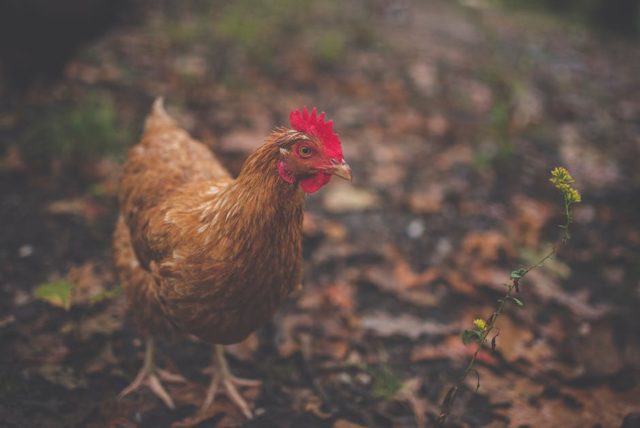 Using the new test, commercial poultry breeders can single out roosters that have a strong immune response and use them to selectively breed a more robust flock. Such resistance, especially during the birds’ first week of life, may lower costs related to animal well-being and food safety.

It’s not a simple process to map and sequence the genome of an animal. Geneticist Hans Cheng and collegues at the ARS Avian Disease and Oncology Laboratory used the DNA of the Red Jungle Fowl line combined with that of a White Leghorn chicken, similar to the one shown here, to create a genetic map of the chicken. ARS scientists are also mapping the genomes of the pig, cow, and honey bee. (Photo by Stephen Ausmus)

Protecting chickens from pathogens involves sanitation, vaccination, biosecurity, and the use of antibiotics and other medications. But some chickens have an especially robust and efficient immune response and can resist pathogens, notes Swaggerty.

The researchers used the test to select roosters for breeding a line of resistant broilers. They then exposed the resistant broilers to several pathogens. They compared the resistant group to a group of susceptible broilers bred from roosters with low cytokine and chemokine levels.
The published results showed that the susceptible broilers had more pathogens and signs of infection than the resistant group. Ultimately, such resistance could mean fewer pathogens remaining on birds at the processing plant and improved consumer safety, Swaggerty notes.

Swaggerty and her colleagues study the genetics of chickens’ resistance to foodborne disease-causing pathogens, such as Salmonella and Campylobacter. Some species of these two bacteria together cause 2 to 3 million U.S. cases of foodborne illness in consumers and 450-500 deaths annually.

Another poultry disease, coccidiosis, is caused by a single-celled parasite known as Eimeria. In the U.S., coccidiosis inflicts annual production losses of up to US$ 800 million, making this intestinal disease a significant threat to nearly 9 billion U.S. meat-type birds.