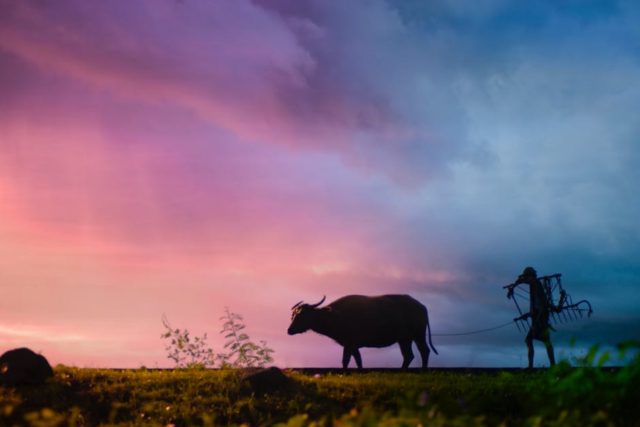 Discover how a civil engineer became a successful farmer.

Angelito M. de Guzman is a civil engineer with a masters’ degree in public administration. He works full-time as an engineer at the Valenzuela City Engineering office on weekdays; on weekends, however, De Guzman transforms into a farmer.

Born to farmer parents in Angat, Bulacan, De Guzman never lost his love of farming. He looks forward to being a full-time farmer when he retires from government service; he is currently preparing for that day and takes every opportunity to attend agriculture-related seminars and exhibits. Whatever new technologies and farming practices he learns are tested and applied in his farm.

De Guzman (left) fabricated his own mushroom fruiting bag filling machine; with him is Art Veneracion.

One project that is already being fully implemented in his farm is oyster mushroom production. He fabricated his own fruiting bag filling machine and learned how to produce his own spawn. AngelTolits Farm is now regularly supplying vegetable vendors at the Balintawak Market with fresh oyster mushroom that De Guzman personally delivers early morning before he reports to work. Mushroom produce that is not delivered fresh is processed into mushroom chicharon; this is supplied to community stores in Angat.

De Guzman wants to improve on the traditional methods being used by Angat farmers to show that farming can be profitable. He converted the two-hectare rice fields located at the back of his residence into an integrated farm and planted a large portion of it to vegetables. Leafy greens like upland kangkong, camote tops, sili, saluyot, and lemongrass provide daily harvests that are delivered to Balintawak Market together with the oyster mushroom produce.

His engineering skills are harnessed to improve his farm facilities; he fabricated greenhouses using recycled iron bars sourced from junk shops. Even his trellises are fabricated using recycled materials. He is also developing a sprinkler system to be installed in his greenhouses and used as cooling system for the farm during the summer. He wants to show that a working farm system can be made available to farmers with minimal investment.

De Guzman advocates the use of natural and organic inputs; he maintains vermicomposting bins that provide his vegetable plantation with organic fertilizer. He also makes use of the waste materials from his mushroom production to make bokashi (organic waste fermentation process that is less odorous than traditional composting) to replenish the richness of his planting media.

To provide a source of protein for the farm, the rabbit is the animal of choice at AngelTolits Farm. De Guzman is aware that rabbits are the best source of healthy meat that is high in protein while being low fat, low cholesterol, and low calorie. He attended the Rabbit Farming Seminar conducted by Art Veneracion at AVEN Nature’s Farm, where he learned that rabbits multiply fast and could very easily be integrated with his farm since they only required a small space and could be fed grass and greens that were already available on his farm. Also, rabbit manure is good fertilizer and can be used fresh with his planting medium.

For continuous availability of planting materials, seedlings and companion plants are propagated inside greenhouses which were fabricated using recycled iron bars as frames which were sourced from junk shops.

His family is now slowly integrating rabbit meat into their daily diet with the goal of introducing the meat to family and friends. With the favorable responses he gets whenever he serves rabbit dishes at community gatherings, De Guzman knows that rabbit meat will eventually be more acceptable to the community, and when that time comes, he will be ready to contribute to the supply.

With his farm projects already in place, De Guzman is ready to show these to his community, with his place serving as a model farm. As president of the Samahan ng Magsasaka sa Donacion, Angat, he advocates organic and natural farming and is gradually introducing it to his community. He wants people to be aware of the benefits of organic farming when it comes to farmers’ health and welfare. It is his belief that people need to be aware that the environment is already damaged by the continuous use of synthetic chemicals and there is an urgent need to shift to organic and natural methods to prevent its further degradation. He hopes that when he retires to become a full-time farmer, his farmer colleagues in Donacion, Angat will already be employing organic farming methods and practices, becoming healthier and wealthier.