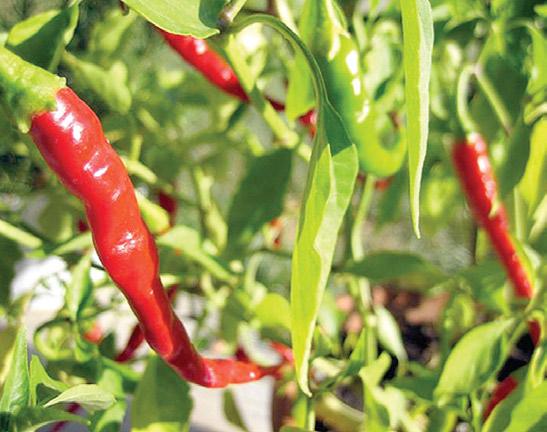 Yields of Bontoc pepper increase through new strategies in irrigation and fertilization.

Batac, Ilocos Norte—Farmers who used to get an average of 3,000 kilos of fresh Bontoc pepper from a one-hectare farm can now harvest 12,800 kilos in one planting season alone.

That is, if they follow the new irrigation and fertilization strategies for Bontoc pepper which are being recommended by Dr. Dionisio Bucao, researcher of the Mariano Marcos State University (MMSU) in this town. Bontoc pepper is locally known as aruy-oy a sili.

Sold at a farmgate price of 20 per kilo, the potential yield could give farmers a net profit of Php226,356 after production costs of approximately Php29,644 are deducted.

The profitability of the new production technology came about as a result of the researcher’s study on the irrigation and nitrogen fertilization strategies for Bontoc pepper which was conducted at the MMSU experimental farms.

In the experiment, Bucao tested the effects of the three irrigation and fertilization strategies for Bontoc pepper and compared them with those being practiced by Ilocos farmers.

A farm worker (left) calibrates the pump discharge before applying the right amount of water to the plants.

During the experiment setup, Bucao planted the Bontoc pepper seedlings in rows with a uniform distance of 40 centimeters (cm) x 60 cm from each other. Each plot was basally applied with 50 kilos of phosphorus and potassium fertilizers. The application was done in three equal splits, at 14, 35, and 65 days after transplanting (DAT).

Results showed that plants applied with 210 kilos of nitrogen and irrigated at a depth of 30 mm water at a seven day interval gave a yield of 12.8 tons (12,800 kilos) per hectare.

Sold at a farm-gate price of 20 per kilo, the substantial yield resulted in a gross profit of 256,000, or a benefit cost ratio (BCR) of 3.07 percent. This means that for every peso spent, a farmer gets 3.07 in return as profit.

The other irrigation and fertilization frequencies also resulted in substantial profits. For instance, the application of 210 kilos of nitrogen, and irrigation at a depth of 30 mm water at 11-day intervals, gave a yield of 11,233 kilos per hectare. This also gave a gross income of 224,660 and a net profit of 195,016 or a 3.13 percent BCR.

To attain the highest yield, farmers are advised to follow the furrow method of irrigating crops. They should apply water through small trenched or parallel channels running through the crop. The depth should be 30 mm, or 300,000 liters per hectare every irrigation period. Do this every 15 days.

In the Ilocos region, Bontoc pepper is grown extensively under rain-fed conditions. High yields are usually obtained in areas with a total rainfall of 600 to 1,200 mm. The crop thrives well in light to medium-textured soils with pH of 5.5 to 7.0, and it requires water ranging from 600 to 900 mm per season.

The low yield of some farmers in the province could be attributed to the very close distance of planting. Farmers generally transplant Bontoc pepper seedlings in triple or quadruple rows spaced at 15 cm x 30 cm. Thus, there is an intense competition for sunlight, water, and soil nutrients among the plants.

Ilocos farmers usually apply a very high rate of fertilizer at 584-156-156 kilos of NPK per hectare, and irrigate their crop at weekly intervals.

Bucao said this practice would allow the plant to attain its full potential, but results in substantial nitrogen loss via leaching. Leaching is a process in which nutrients, chemicals, or contaminants are dissolved and carried away by water or moved into the lower layer of the soil.

“Nitrogen leaching does not only reduce the benefits derived from the application of fertilizer, but may, in the long run, contaminate the groundwater resource,” Dr. Bucao warned.

This has compelled the researcher to develop the appropriate irrigation and fertilization management practices for the crop to increase profits derived from it while preventing the contamination of groundwater with nitrate-nitrogen.