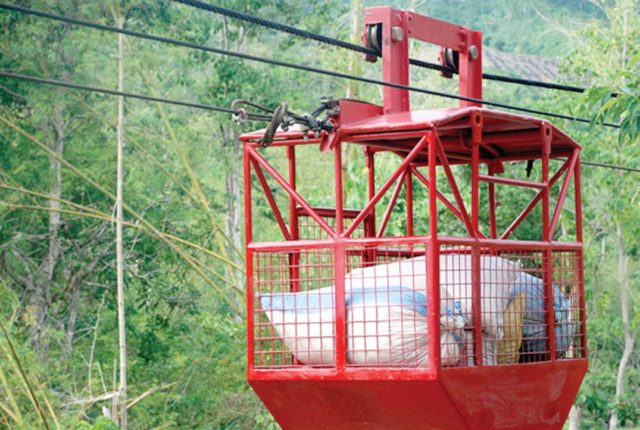 Another Agricultural tramline System (ATS) project worth 2.9 million was implemented in the province of Iloilo by the Department of Agriculture-Philippine Center for Postharvest Development and Mechanization (DA-PHilMech) earlier this year.

The San Antonio ATS is a bi-cable system with a hauling capacity of 350 kilograms per trip at the recommended speed of 100 to 150 meters per minute. This tramline, with a cable length of 1,241 meters, covers 47 hectares of corn, cassava, upland rice, banana, and vegetables being
grown by 50 farmers.

Recently, Engr. Bartolome S. Tesorero, Jr., Science Research Specialist of the DA-PHilMech,
conducted a training session on how to operate and maintain the ATS among farmer operators and beneficiaries of the project.

During the intensive training, Engr. Bartolome S. Tesorero Jr. of DAPHilMech instructed farmer operators on how to operate the driving gears of the Agricultural Tramline System.

The DA-PHilMech is implementing this project in elevated agricultural zones with a
minimum plantation area of 25 to 30 hectares to make the tramline economically feasible. The ATS is an alternative transport system used by farmers for hauling their agricultural inputs and products to and from areas far from road networks because of ravines, rivers, and dense vegetation.

Presently, Western Visayas has 14 units out of the 129 tramline projects implemented all over
the country. There are 8 units in Negros Occidental and 6 units in Panay Island. In Iloilo,
another tramline project is already operational in Brgy. Alimono, Passi City.

A DA-PHilMech study showed that farmers pay an average hauling cost of 1.50 per kilogram for agricultural products transported using traditional methods. With the use of the ATS, farmers will only have to pay 0.50 per kilogram. The ATS tariff will be used to cover fuel, oil, and other maintenance costs; the honorarium of the operators; and for
additional income for the farmers’ associations.

Engr. Tesorero explained that Agriculture Secretary Proceso Alcala urged them to place seats in the tramline “cages” so that these can be used by people during emergencies, such as when someone has been bitten by a snake or is having a difficult time giving birth. The use of the tramline by tourists is strictly prohibited.

He also reiterated to farmers that they must avoid overloading the tramline, or using it for human transport in non-emergency situations. Engr. Tesorero urged farmers to follow the proper maintenance and operating procedures for the tramline project
to keep the facility running for more than 15 to 20 years.

The said project was turned over by Sec. Alcala and DAPHilMech Director Rex Bingabing to the farmers of Brgy. San Antonio in April of this year.

A Cup of Success