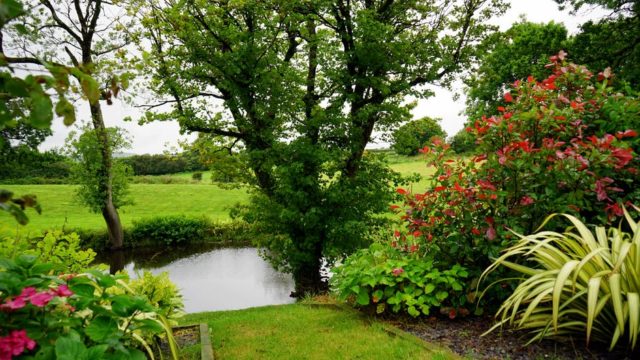 Angel D. Padron, 60, of Brgy. Libtong has long been using liquid derived from fermented eggshells because aside from its potency as an inducer is comparable to that of the organic flower inducer available at commercial agricultural stores.  being effective, the eggshell liquid is safe for humans, animals, and the environment.

Padron, one of the 69 Magsasaka Siyentista (MS) in Region I, was appointed by the Ilocos Agriculture, Aquatic, and Resources Research and Development Consortium (ILAARRDEC), to test his findings in his one-hectare papaya plantation, located in one of the hills of Brgy. Libtong. Padron’s farm. It is planted with Red Lady and Sinta papaya varieties and Saniata dragon fruit, and he has been receiving technical assistance from ILARRDEC and the Office of the Provincial Agriculturist (OPAG) of Ilocos Norte.

The author with Padron in front of his papaya farm in Bacarra, Ilocos Norte.

In one portion of the farm, there is a small shed-type bunkhouse which he has converted into a compost and vermiculture production area.

Padron collects eggshells from garbage cans of nearby canteens and restaurants. In Laoag City and Batac, Ilocos Norte, forinstance, eggshells are abundant in garbage cans of empanada food ou tlets, big canteens, and restaurants. Garbage collectors normally just haul these wastes, dump them in sanitary landfills, and burn them. However, Padron said that instead of letting this waste rot in garbage dumpsites, you can make them into organic fertilizer and flower inducer.

According to him, making flower inducer from eggshells is easy. Here’s how to do it:

Collect eggshells and put them in a container. Make a mixture of 1 kilogram (kg) of eggshells, 1 pail of water, and 1 kg of molasses. The mixture is again mixed with 1 liter of effective microorganism activated solution (EMAS). Let the mixture ferment for one week before it can be sprayed on papaya or other crops.

A farmer can buy EMAS from any agricultural store, or they can make their own EMAS following the steps recommended by the Department of Agriculture – Regional Field Unit 1 (DA-RFU1) based in San Fernando, La Union.

First, prepare your effective microorganisms (EM). If you don’t have ready EMs, you can make these one out of local materials found in your backyard. You need dried kawayan or banana leaves or rice stalks, molasses, and a small amount of water. These materials usually contain beneficial microorganisms, fungi, and microbes that will serve as ingredients for making EM.

After one month, open the drum in the late hours of the day, preferably before twilight when the temperature of the surroundings drops. Be sure to cover the drum just before the sun rises so that the nitrogen content will not evaporate due to the heat of the sun. You can now use the EM for your plants.

Aside from using the EM as an ingredient for making flower inducer, you can also use it for in situ rice straw composting, rapid composting, household composting, kitchen waste fermentation, and organic fertilizer production.

When you have made you own EM, you can make EMAS. Here’s how to make 1 liter of EMAS: mix 10 milliliters (ml) EM with 40 ml molasses and 950 ml water, and let the mixture ferment for 5-7 days. Mix the solution with 1 liter molasses and 98 liters of water to make 100 liters of EMAS.

EMAS is also used in composting, kitchen waste fermentation, organic fertilizer production, and in animal production such as for sanitation and feed additives/probiotics. When applied in farms during land preparation, EMAS hastens the decomposition of farm wastes in a period of just one month, instead of the usual 3 months of waste decomposition.

ANOTHER RESEARCH BREAKTHROUGH – Aside from the flower inducer, Padron has also invented a very effective and potent organic bio-repellant against common insect pests attacking papaya and the dragon fruit plant.

The bio-repellant is made by mixing Neem leaves, oregano, marigold, and garlic bulbs. The dried materials are placed in a big drum with enough water to cover them. Then the materialare mixed with molasses and EMAS before being allowed to ferment for one week.

Spray the mixture between the leaves and branches of papaya and dragon cactus plants, and you will be assured of crops free from pests that can serve as vectors for many plant diseases.

Celebrate Earth Day Every Day in your Home