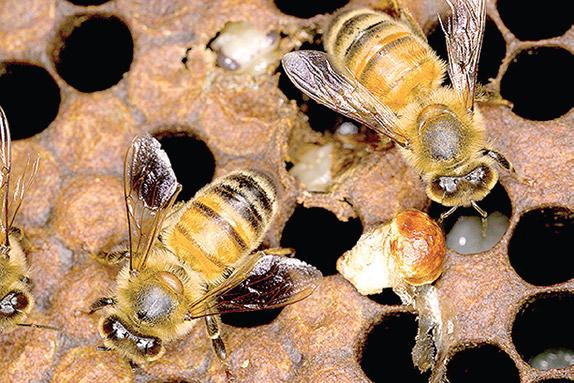 Sometimes, even honey bees need help with “housekeeping”—especially when it comes to tidying up their combs once the honey’s been removed.

The findings stem from a two-part study led by Rosalind James, an entomologist in ARS’s Pollinating Insect—Biology, Management, and Systematics Research Unit in Logan, Utah. Results from the first part of her team’s study, published in 2011 in the Journal of Economic Entomology, demonstrated that fumigating combs with ozone gas at concentrations of 215 to 430 parts per million (ppm) killed all life stages of the greater wax moth, depending on length of exposure. Adult moths and their combdamaging larvae were most susceptible, and eggs were more resistant, requiring greater exposure levels.

Ozone, a highly reactive state of oxygen, also destroyed spores of the chalkbrood fungus after 24 to 36 hours of exposure using 1,500 ppm. Another honey bee pathogen, however, proved tougher to kill: The American foulbrood bacterium required substantially longer exposure times, along with high humidity levels and an ozone concentration twice as high.

Both pathogens can persist for years on beekeeping equipment and in hives as dormant spores. They germinate when conditions are optimal, and they attack the colony’s most vulnerable members, the larvae or “brood.” Methyl oxide and gamma irradiation are among treatments that have proven effective for disinfecting comb, but these treatments can be costly and impractical. “Irradiation has to be done in a regulated facility,” says James, “whereas an ozone fumigation chamber is something beekeepers can set up on their own.”

In January 2013, the team published results from the second part of the study in the journal Agricultural Science. That paper details ozone’s breakdown of coumaphos, fluvalinate, and several other pesticides that can accumulate in hives. Honey bees are typically exposed to pesticides while visiting flowers that have been sprayed or when the bees are treated for parasitic mites, notes James. The study’s coauthors include James Ellis of the University of Florida in Gainesville, and Adrian Duehl, formerly with the ARS Center for Medical, Agricultural, and Veterinary Entomology, also in Gainesville.

The team was particularly interested in coumaphos and fluvalinate because of the chemicals’ use against Varroa mites. Considered a top threat of honey bees nationwide, the flat-bodied parasites can weaken and eventually kill bees by feeding on their bloodlike hemolymph. Severe Varroainfestations can decimate a hive within months if left unchecked.

In experiments with glass vials containing residues of these mite-killing pesticides, ozone exposures of 500 ppm for 10 to 20 hours degraded 93 to 100 percent of coumaphos and 75 to 98 percent of fluvalinate. Higher concentrations and longer exposure times were required to reduce pesticide concentrations in wax and comb samples, which were obtained from a Florida-based commercial apiary to reflect real-world exposure levels. The researchers observed that ozone treatments degraded the pesticides better in new combs (less than 3 years old) than in older ones (more than 10 years old).

“There’s something about the wax that can impede this breakdown, especially
in a comb that’s been reused in hives for many years,” says James. “It may be
that organic materials build up inside the wax, and these materials adsorb or break down the ozone before it can react with the pesticides.”

Interior view of the ozone generator that supplies ozone to the fumigation chambers used in the studies.

One approach may be to start with new comb and treat it yearly to prevent pesticide residues from building up; another would be to replace comb more often than is commonly practiced. High-capacity ozone generators may be necessary for ridding comb of especially high pesticide concentrations—albeit at added cost.

During the study, participating beekeepers also reported an off-odor emanating from combs that had been treated for wax moths or small hive beetles and placed back into hive boxes. So, in a separate study, the team analyzed breakdown products from hives that had been treated with 2,000 ppm of ozone. They determined the primary source of the odor to be benign substances known as “carboxylic acids” and “straight-chain aldehydes.” Fortunately, the odors didn’t repel the bees and dissipated after a few months, according to the beekeepers. One also noted that bees accepted comb treated for wax moths better than untreated comb.

Besides coumaphos and fluvalinate, the ozone treatment reduced or eliminated eight other
common agricultural pesticides found in Florida comb samples, including esfenvalerate (Conquer
or Ortho Bug B Gon insecticides), thymol (a pesticide made from thyme extract), and chlorothalonil (Fung-onil or Daconil fungicides).

James envisions beekeepers fumigating combs after they’ve been removed from hive boxes and
emptied of honey, but just before being placed in storage for the winter. Combs removed from storage aren’t necessarily placed in the original hive, but sometimes in a different one.

“This practice potentially transmits disease from one colony to the next, especially if the pathogen produces a spore that can stay dormant for long periods,” notes James.

Beekeepers may be reluctant to discard comb— even that which has become discolored from
years of use—because of the considerable effort bees put into making comb. “It takes a bee
time and energy to make wax, but it’s needed for making and storing honey, so creating new comb comes at a cost to honey production,” adds James.

Ozone offers an appealing solution for decontaminating combs before reuse because it’s a process that beekeepers can carry out using commercially available equipment. Although toxic at the concentrations that are used to kill pests and pathogens and degrade pesticides, ozone rapidly breaks down into water and oxygen, she notes.

Current uses of ozone, which is considered a “generally recognized as safe” substance by the U.S. Food and Drug Administration, include decontaminating pool and drinking water and
safeguarding the postharvest quality of fruits and vegetables. Until James’s studies, there had
been no published reports on using the gas to decontaminate honeycombs.

“In our next field trials, we are going to try using ozone on nesting boards for the alfalfa leaf cutting bee, which is used for pollinating alfalfa crops intended for seed production,” says James.
She also plans on collaborating with ARS’s Bee Research Laboratory in Beltsville, Maryland,
to evaluate ozone’s effectiveness at reducing disease transmission and improving colony health. (Reprinted from the March 2014 issue of Agricultural Research magazine)