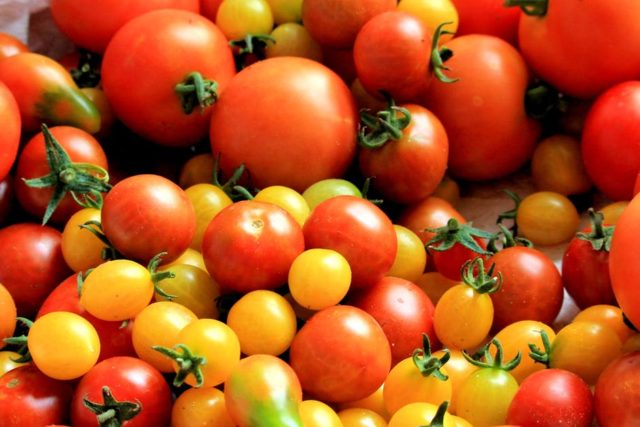 Discover this new found tomato that the traders ask farmers to produce.

After farmers in Bulacan began harvesting a new tomato variety that agronomists of vegetable
seed and crop care company Allied Botanical Corporation (ABC) had convinced them to plant in techno-demonstrations and commercial demos, traders told the farmers to produce more, saying they would pay more for it than for other tomatoes.
The traders and and their buyers in Metro Manila wanted more of Fantastic F1 because of its
excellent shipping and shelf-life qualities, and outstanding fruit characteristics.

A new variety developed by the Sakata Seed Corp. of Japan, Fantastic F1 is Sakata’s first tomato for Filipino farmers that’s neither of the Cherry nor Beefsteak types. ABC is exclusive
distributor in the Philippines for the leading Japanese flower and vegetable breeder, one of the world’s top 10 seed companies.

A widely-adaptable and highly-prolific bearer, Fantastic F1 yields heavy fruits weighing 65 to 75 grams each. No tomato variety beats it when it comes to the keeping quality of its fruit. And the variety has good tolerance to Bacterial Leaf Blight and Tomato Yellow Leaf Curl Virus, two widespread and destructive diseases of tomato plants in the country.

TOMATO SUCCESS STORIES – Among the farmers who were first to plant Fantastic hybrid
tomato is Luisito Vargas of Barangay Lambakin in San Miguel, Bulacan. He plants vegetables in a 7,500-square meter portion of the land that used to be tenanted by his wife’s late rice farmer-grandfather. Vargas has grown vegetables for 15 years, planting hot and pansigang sili, eggplant, and okra in the rainy season, and sitao and tomato in the summer.

Fruits of Fantastic F1 are fleshy, have only two or three locules or seed cavities, and have large placentas or cores. Note the stalk ends with their old sepals from the fruits’ flower stage still attached.

He planted the dry-season Fantastic crop in mid-December. A progressive farmer who makes sure that the seeds that he sows have high germination and seedling survival rates, he sowed
the tomato seeds in plastic seedling trays that he filled with a high-quality growing medium, Klasmann Peat Substrate (a product also marketed by ABC). Many farmers consider it to
be the best growing medium available in the country today, and many progressive commercial vegetable and ornamental plant growers nationwide have learned to use it—the veggie farmers, for starting their seeds; the ornamental growers, as a potting medium.

Starting seeds and seedlings requires a germination medium that is well drained and well aerated but which can nonetheless hold sufficient moisture, is relatively low in chemical fertilizers or toxic chemicals, and free of pests and diseases. A loose, porous, fine-textured medium that will not develop a surface crust that will interfere with seedling emergence is essential.

“Seeds cost money and should not be wasted because of low germination (rates) and poor seedling survival,” said Vargas. “I learned two years ago from ABC that Klasmann ensures high seed germination and seedling survival rates, and assures the successful
transplanting of seedlings—which depends on the young plants’ healthy root mass that will enhance the absorption of moisture and nutrients for fast, vigorous growth.”

Vargas used the Potgrond H formulation of Klasmann Substrate as recommended
by ABC technologists for lowland areas with warm and dry conditions. The
formulation can absorb and retain more water because of its high content of frozen black peat and white peat moss. It’s thus ideal for places with irrigation problems in growing vegetables. The product is available in 70-liter polyethylene bags. Klasmann-Deilmann,
the German company that exports more than 1,000 formulations of it to over 50 countries, customizes these to suit various soil and climatic conditions, crop requirements, and other criteria relevant to each importing country, and designates their volume in liters instead
of kilograms.

“One 70-liter Klasmann Potground H costs less than 700,” said Vargas. “I sowed my
Fantastic seeds in 30 seedling trays with 128 sections each. It’s not difficult to compute that the 3,840 healthy and vigorous seedlings that I prepared for transplanting in my field cost me less than 18 centavos each. And (to think) we farmers think we cannot afford new technologies like this because they’re expensive.”

Vargas transplanted the seedlings in a field he had liberally basally fertilized with chicken manure for his previous crop. He can have a lot of the manure cheaply because he has a relative with a medium-sized poultry egglaying project in the neighboring barangay; all he has to do is have the waste regularly hauled away from the chicken farm. Having been told by the ABC agronomist helping him that Fantastic plants need more space than those of other varieties, he doubled his usual planting distance for tomato by using alternate 80-centimeter (cm)-wide raised plots, and leaving the 80-cm space between as irrigation trenches. He outplanted 21- day-old seedlings that he fertilized with calcium nitrate three days after transplanting (DAT).

At 17 DAT, he side-dressed with 14-14-14, and with 16-20-0 at 30 DAT. Top-dressing was again done with 16-20-0 at 45 DAT. He watered the plants every three days by flooding the
trenches between the raised plots, easily sourcing water from a shallow tube well. The Central Luzon Region’s abundant aquifers particularly benefit farmers in the provinces of
Bulacan and Pampanga.

Other farmers came to see and admire the new tomato that wholesale buyers in Metro Manila’s Balintawak Market paid 2 more per kilo than for other varieties.

As he had previously planted sitao in his field, it still had the bamboo stake-posts needed for trellises. But he decided not to trellis the Fantastic plants because he would begin harvesting
fruits in March and was not sure farmgate prices would still be good because tomatoes were certain to be plentiful at that time. “I decided not to spend anymore for twine and labor (so that) my crop (could) be more profitable in the event that prices were low,” he said.

He estimated that the Fantastic plants would yield a total of 6,500 kilograms of fruit. This, according to the ABC agronomist, was a quite conservative estimate. So that Vargas’
brother—who brought the tomatoes to the Balintawak Market in Metro Manila—would not have to bring as much as 1,000 kilos per trip and risk not being able to sell everything, Vargas staggered his harvests, picking only several hundred kilos at a time.

“We see to it that no tomato returns to San Miguel unsold,” said Vargas. “That’s one of the most discouraging things that we farmers can experience. We would rather sell even if the
price is very low than (to have returns of) unsold vegetables. Fantastic has an advantage, however, because wholesale buyers in Balintawak pay two pesos more per kilo for it compared to other varieties.”

On one of the Vargas brothers’ harvest days, several farmers in Lambakin and its neighboring barangays came to confirm what they had been hearing about the new tomato. The ABC
agronomist who had introduced Fantastic to the brothers was there to give the visiting farmers pointers on the culture of the hybrid tomato, especially the growing of seedlings in Klasmann
Peat Substrate as Luisito Vargas had done. The agronomist showed them trays of Fantastic seedlings grown on the medium that were nearly ready for transplanting.

Seeing the picked Fantastic F1 fruits, the farmers could not help admiring the tomato for which buyers paid a premium more than they did with the fruit of other varieties. They noticed that
all of the yellow and yellow-green fruits that had been picked were so sturdy, they still had their stalks with their old sepals from the stage when these were still flowers attached to the plant. “Even if picked when the fruits are already red, the stalks and sepals are not easily detached,” said Vargas. “That just shows how strong Fantastic fruits are.”

The Fantastic tomato’s fleshy tissues are its thick pericarps and the large placentas which are at the fruits’ core. Each fruit has only two to three locules (the cavities where the seeds are), thus giving consumers fleshier tomatoes for their viands.

How Photosensitization Can Stop Viruses from Infecting Cells