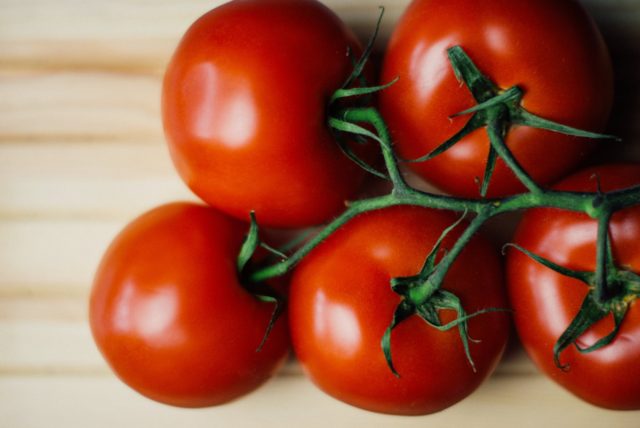 When it comes to the volume of vegetables that traders bring to markets, nothing can top tomatoes when these are in season.

At this time, in the Central Luzon province of Pampanga, many traders concentrate on buying the tomato harvests of farmers for their customers in the province and neighboring Bulacan, especially
when the veggie’s prices are picking up in the retail markets.

According to agri-supply storeowner Rolando Aga, who maintains establishments in Arayat and Candaba towns, seeds and the ready-to-plant seedlings of tomato that he supplies have considerably improved his four-year-old business since the latter part of 2014, when he began to help promote two tomato varieties with outstanding characteristics to farmers.

The varieties are Sakata Fantastic F1 and Condor Avatar F1, which are marketed by the Allied Botanical Corporation (ABC). Fantastic F1, developed by the Sakata Seed Corporation of Japan, is a widely adaptable and highly-prolific bearer that
yields heavy fruits weighing 65 to 75 grams each. No tomato variety can beat it when it comes to the keeping and shipping qualities of its fruits. In addition, the variety has good tolerance to Bacterial Leaf Blight and Tomato Yellow Leaf Curl Virus (TYLCV), two widespread and destructive diseases of tomato plants in the country.

ABC uses its Condor Brand for seeds developed, screened, and tested at its research farm in Tayug, Pangasinan. Avatar F1 is a semi-determinate tomato that’s a very prolific fruit bearer. It has strong tolerance to TYLCV. Its uniform fruits that each weigh from 70 to 90 grams have thick flesh; like Fantastic, these are excellent when it comes to shipping and shelf life. Avatar is excellent for off-season planting because of the plants’
sturdiness.

GOOD PROFITS – One of the first farmers to plant Avatar in Arayat is Perla
Alfonso, sister of his wife Jennyfair. Alfonso initially transplanted 1,920 seedlings in mid-January at her three-hectare farm in Barangay Camba that’s also planted to white corn and siling pansigang. After eight pickings before the end of April, she had already harvested about 1,800 kilograms of Avatar fruit.

As her first few pickings in early March coincided with the stilllow farmgate prices of tomatoes, Alfonso picked a few dozen kilos of already mature but still green Avatar fruit to see if these would still turn bright red after being stored for about a month at room temperature while she waited to get a better price for her tomatoes. She was sure that storing the fruits wouldn’t affect them at all because of their thick flesh and long shelf life—and she was right. After nearly a month, the Avatar fruits turned bright red but were still firm. They lost a little weight but when she sold them, prices had risen by PhP 15 per kilo.

According to Alfonso, she previously tried—with other tomato varieties’ fruits that she picked while these were still green—to keep these for a month. Unlike those of Avatar, the fruits of those varieties did not turn red after about a month at room temperature; they only turned pale yellow in color.

Alfonso sells her Avatar harvests exclusively to the traders Arnel and Pinky Espiritu, who bring the tomatoes to restaurants and retailers in Angeles City. The Espiritus usually bring 100 kilos of Avatar on each trip to Angeles. They say that the Condor tomato is the easiest to sell at a good price because of its high quality.

Another Arayat Avatar planter, 68-year-old Mely Simbulan of Barangay Lacquios, plants both the Condor variety and Sakata Fantastic F1 tomatoes in most of the three-hectare field that she says she rents for PhP 40,000 a year. Having helped her parents farm when she was still a young girl, she has mastered how to grow crops in and out of season, and tomato isn’t an exception. Her six sons and a daughter-in-law help her.

Against the advice of Gerald Cortez, ABC market development technologist for Bulacan, Pampanga, and Bataan, who says that the company’s technical services department doesn’t recommend Fantastic for wet season planting, Simbulan says she will go on ahead and plant a half-hectare each to the Sakata variety and
Condor Avatar in June—as if to emphasize that nothing can really beat experience, and not just in farming, too.

DEMAND EXCEEDS SUPPLY – Simbulan is herself also a trader. As she has been doing for more than a decade now, she brings her harvests to customers at the Divisoria Market in Manila.

Aga and Cortez noticed that in Arayat, there were more female farmers as compared to the men. This came to the fore when the two hosted a meeting among Fantastic and Avatar planters at Aga’s store in Brgy. Camba primarily to inform the farmers of the traders’ desire to be able to supply their customers with as many fruits of the two varieties as they could produce.

Meanwhile, back in Brgy. Magumbali in Candaba, Ronald dela Cruz and Armando Maglalang project that their harvest from their one-and-a-half hectare planted to Fantastic F1 to be 30,000 kilos. Three traders have constantly visited their field whenever they pick fruits.

According to Efren Manalastas, who brings tomatoes to Balintawak Market in Quezon City, Metro Manila, Fantastic tomatoes have become very popular and the demand for them is rising. He says that many farmers still do not plant the variety so he cannot buy as much as he would like, and that his three big customers in Balintawak can ech absorb 5,000 kilos of
Fantastic every three days.

The Arayat tomato farmers who attended a meeting at the Arayat branch store of Rolando Aga pose for a photo with Allied Botanical Corp. agronomist Romeo Bognadon (second from left, front row).

To buy Fantastic tomatoes, he has to compete with local traders who bring the tomatoes to nearby San Miguel, Bulacan, such as Nicasio Maon and Gabriel Caguindum, with the former needing up to 70 kilos per day and the latter from
200 to 300 kilos daily. The two say that they earn only two to three pesos for every kilo of Fantastic that they sell in San Miguel but the fast turnover and the more frequent trips are a big advantage to them.

Aga has begun selling both seeds and seedlings of Fantastic and Avatar at a 50-50 ratio at both his stores. He has about 500 square meters (sq. m.) of bamboo-and-plastic rain shelters in their compound in Candaba where he grows the seedlings with the help of his brother-in-law Mike de Lara, husband of Aga’s sister Sheryl, who helps tend the agri-supply store. In Arayat, Maria Mungcal, another sister of Jennyfair, manages the branch, which has a 200-sq. m. bamboo-and-plastic rain shelter-protected seedling nursery.

Several farmers have ordered seedlings of Condor Avatar F1 for
wet season planting, especially those whose farms are at the
foothills of Mt. Arayat.

“The moment the soil in their fields gets even only a little wet, those farmers will promptly begin planting Avatar,” says Aga. “They take good advantage of
the excellent drainage of their farms and hardly care how wet the season really will be. Condor Avatar, unlike Fantastic, is also not the least mindful of rain. In fact, Avatar loves to be irrigated through furrow flooding, which you surely cannot say about Fantastic.

“That’s probably the primary reason Fantastic’s popularity suddenly shot up since the meager rains that we got beginning this year,” Aga continues. “The variety really loves the dry months. That’s when it fruits so vigorously and bears those tomatoes that, when picked at their yellow-green, yellow, and reddening stages, are so sturdy, these still have their stalks with their old sepals attached, from the stage when these were still flowers. Even if picked when already red, the stalks and sepals are not easily detached and the fruits remain firm, showing how strong Fantastic fruits really are.”

Fantastic tomato also has fleshy tissues in its thick pericarps and the large placentas which are at the fruits’ core. Each fruit has only two to three locules (seed cavities), thus giving consumers fleshier tomatoes for their viands. The traders also say that buyers say the tomatoes are sweet and not sour like the fruits of other varieties.