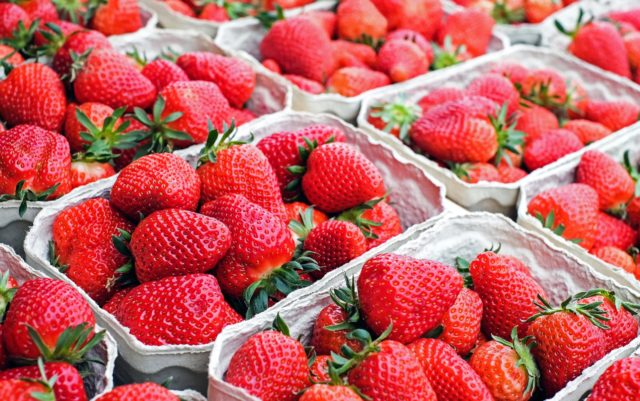 What the people could benefit from growing different varieties of Strawberry in Mindanao, Philippines.

Sultan Dr. Pangandag Magolma, incumbent Dean of the College of Agriculture (CA) of Mindanao State University (MSU), together with Dr. Emma Sabado recently said that strawberry fruits can grow in the experimental agricultural garden within the main campus.

Magolama said this was the product of research work about strawberry (Fragaria anannasa Duch) entitled, “Varietal Trials of Strawberry Under MSU Marawi Condition.”

Dr. Magolama and Dr. Sabado emphasized that in the course of the research work they conducted, they were able to successfully grow three varieties of strawberry. These were Haranoka, Florida, and the BSU-Pierre. The project, funded by the University under the leadership of MSU system president Dr. Abdulrhman Macapado A. Muslim Al Haj, began in 2010.

According to their research, the three varieties of strawberry did not differ significantly in terms of number of transplants to flowering number; number of flowers per plant; number of days from flowering to fruit maturity; and the number and weight of developed fruits. Strawberry plants, Dr. Magolama explained,
reproduce in two ways: sexually and asexually. Sexual reproduction involves the flowers and pollination; strawberry plants can self-pollinate by putting out runners that can start new plants.

Some expert strawberry growers said, upon being consulted, that strawberries were used to treat or remedy infections, inflammation, depression, and diseases of the blood, liver and
spleen, Dr. Magolama said.

Dr. Magolama said the most significant finding of their study is that the vitamin and mineral-rich strawberry is feasible for growing both on the main campus and outside it. If this aromatic fruit can be commercially grown in Marawi City and Lanao del
Sur and other cool municipalities, one can expect an additional source of livelihood and income for growers. Then perhaps, the spectacle of a strawberry field in Lanao del Sur will be a reality
instead of just a memory from a song.

The MSU CA can share the expertise of some of its faculty members, who can conduct an orientation seminar-workshop on the growing of strawberry in their communities. In addition, community high schools situated in the rural areas of the
province of Lanao del Sur can be tapped to help plant strawberry in their respective municipalities.

As one of the colleges accredited by the Commission on Higher Education or CHED as a Center for Excellence in Agriculture and as a National University and College of Agriculture in the
Autonomous Region in Muslim Mindanao or ARMM, MSU’s CA is presently undertaking various projects that will support its instruction, research, extension, and product endeavors. These are:

• The growing of saluyot (jute leaves or C. olitorius), a favorite vegetable among the Meranaws living in the Lanao region. Magolama cited the research work of Dr. Sabado, a faculty member of the College of Agriculture in the main campus, which revealed that saluyot is rich in antioxidants, minerals, vitamins, and fiber.

The Meranaws usually cook saluyot with bamboo shoots (locally called dabong), which are commonly found in their locality. Sometimes they cook saluyot with mudfish (locally
called aroa-an) found in Lake Lanao and even in their rice fields. They include this as one of the recipes usually served to their visitors (usually women) during special occasions like the pagan meranaw. Magolama said that presently, they are
conducting further studies to culture the growing of saluyot in their respective
communities. The MSU-College of Agriculture has trained faculty members who can assist the farmers in the area to grow saluyot.

• Mushroom project: The second project is the growing of mushroom, with its production integrated into the rice program. To further improve its development, Magolama said, they
have adopted several methods; among them is the community-based mushroom production project (CBMPP), one of the major activities being conducted by the Rice Program of the
Department of Agriculture (DA) in support of the Food Staples Sufficiency Program—specifically, the “Palayamanan” project in lowland farms. The Palayamanan approach integrates rice production with other commodities like peanut, corn, sweet
potato, and mungbean, including livestock.

Based on the college’s experiments, it was found that by using available materials in the field like rice straw as a substrate, more mushroom can be harvested.

In fact, experience has shown the College of Agriculture that during the observance of the Holy Month of Ramadhan, the amount of mushrooms they harvest is not enough to meet
the needs of its employees, even the nearby communities, because mushroom is one of their favorite vegetables, in part due to the vitamins contained in it. The former vice president of MSU-Main Campus, Dr. Ruffy Ignacio—who has visited the mushroom culture room placed inside its top-layer space environment-assured the College of Agriculture that more funds would be provided to further improve and enhance the production of mushrooms so that it could increase production to the level where it could at least meet the needs of its people.

In addition to the ongoing projects of the College of Agriculture, it continues to plant tomato, which is one of the most economically important vegetable crops. It is an ingredient in many dishes, and a good source of vitamins and other nutrients. In fact, tomato ranks second only to eggplant in production area in the Philippines (compared to ranking fifth for the same in Indonesia).

Tomato production is dominated by small-scale farmers who favor this crop for its relatively high cash value, which contributes significantly to their income.

As revealed by some faculty members of the CA, the soil of the MSU-Main Campus can
support the increased production of tomatoes. The Meranaws living within Marawi City and
Lanao del Sur use tomatoes as an important ingredient in cooking fish to give it a better
taste.

Dr. Magolama reported that since the assumption to office of MSU System Dr. Muslim Al Haj, the CA was able to remit its income, deposited with the University cashier, which came from several income-generating projects, including the CHED-subsidized projects.

Based on research conducted by Dr. Sabado, of the 43 major vegetable crops in the Philippines, tomato contributed 30% to 60% of the total value of vegetable production.

Another popular vegetable that the CA produces is Napa cabbage, a Chinese vegetable variety in the Brassica family. As cabbage is a cool-season crop, it is quite difficult to maintain.

However, Dr. Magolama said that with the use of the CA’s soil analysis plame photometer
laboratory equipment, the growing of cabbage can easily be controlled. The CA’s cabbage
grows as an oblong-shaped head, consisting of tightly arranged crinkled, thick, light-green
leaves with prominent white veins.

A retired faculty member of the CA said that fresh cabbage is an excellent source of a natural antioxidant, vitamin C, providing 36.6 mg or about 61% of the recommended daily allowance (RDA) per 100 grams. The retired faculty member added that the regular consumption of food rich in Vitamin C helps the body develop
resistance against infectious agents and harmful, pro-inflammatory free radicals.

Fresh cabbage is also a very good source of vitamin K, which helps develop healthy bones
and which has also been established to have a role in curing Alzheimer’s disease by limiting
neuronal damage inside the brain.

Meanwhile, the MSU-Main Campus recently inked a memorandum of agreement (MOA)
with the DA regarding three major projects which began implementation through the
MSU’s CA, which is headed by Sultan Dean Pangandag. These projects are in consonance
with the college’s thrust to support agricultural development and is poverty-alleviation oriented in line with one of the top programs of President Benigno Aquino III.

Alcala, in his speech, lauded the administration among its students as it continues to offer courses in agriculture and fisheries.

He further encouraged the students to aspire to put up their own farms when
they graduate and to be agri-entrepreneurs who will not only focus on intensified
agricultural production but also venture into value-adding and processing.

Alcala handed down to President Muslim a combined allocation of 4.5 million, of which 1.5 million is allotted for organic farming, 1 million for halal goat production, and 2 million for tissue culture production. It is hoped that the funds will jump start the implementation of these projects for agricultural development.

President Muslim said that with this new development, “I firmly believe that the College of Agriculture of the MSU-Main Campus could play a vital role to help the farmers increase their yield and is giving them opportunities to plant high-yielding crops to increase their income. This is one way to help other provinces based on high poverty magnitude, poverty incidence and vulnerable to natural disasters.”