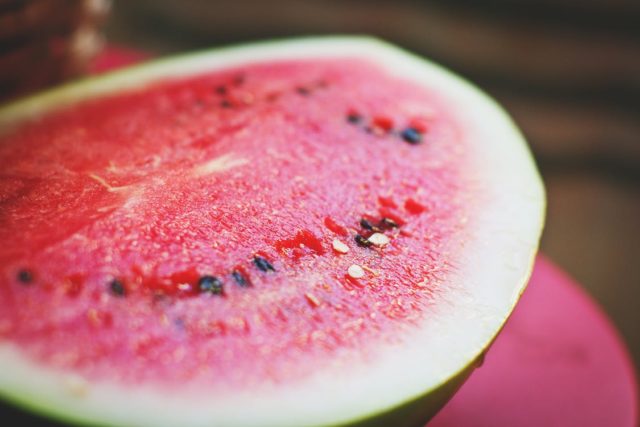 How three growers became successful in growing three watermelon varieties and how they outgrown the “Yellow Revolution” in Gumaca, Quezon.

There should be more people like siblings Leila, Larry, and Ruben Iglesia of Barangay Bamban in the town of Gumaca, Quezon, who are doing all they can to make the three-hectare farm they inherited from their farmer-parents sustainably productive.

THE WATERMELONS BEHIND THE ‘REVOLUTION’ – After she retired from her well-paying job with a plush vacation resort in Palawan, Leila decided to invest her savings in the farm to improve its production of rice and vegetables. Her brothers shifted to hybrid rice for higher yield and profitability, and also began growing hybrid pinakbet vegetables. In 2014, after the rice season, they decided to also grow watermelons because they saw how many other farmers in their town were planting and profiting from those crops.

“But all the other farmers planted round watermelons: the striped green ones and those with dark-green rinds,” says Larry, who’s the eldest of the three. “Being new (participants) in what
we saw as a developing watermelon ‘war’, we decided to grow other types that we hoped
would not only sell better but also at higher prices.”

The agronomists who guided them in growing hybrid vegetables sold under the Condor Brand told the Iglesias about the “Yellow Revolution” the company was launching at the time. It involved four Condor watermelons that either had yellow rinds with red flesh or
green rinds with yellow flesh.

The three Iglesia siblings (from left) Raul, Leila, and Larry proudly show off their harvests of the three Condor “Yellow Revolution” watermelons they planted at their farm in Brgy. Bamban, Gumaca, Quezon.

The four watermelons in the Condor “Yellow Revolution” are Golden Boy F1 and Golden Lady F1, which have bright yellow rinds and sweet bright-red flesh, and two bright-yellowfleshed
Torpedo-type varieties—Mellow Yellow F1 with a striped green rind and the Sugar Baby-type
watermelon called Yellisimo F1 with a dark-green rind. All these watermelons have only a few small seeds.

THE SUCCESSFUL FIRST ATTEMPT – Larry and Ruben decided to plant Condor Mellow Yellow for their first try. The variety can be grown year-round and harvested 60 to 65 days after sowing. The vines have good field- holding ability and are resistant to various pests and diseases. The variety bears uniform fruits that weigh from two-anda- half to three kilograms each, are very sweet, and have excellent eating and keeping qualities.

The brothers directly sowed a 50-gram can containing 1,400 seeds of Condor Mellow Yellow in their field after their palay harvest. They had liberally applied processed organic fertilizer to the field as basal application prior to transplanting the rice seedlings, so they just put in a tablespoonful of 14-14-14 fertilizer in each 15-centimeter-deep hole and covered this with a layer of fine soil before dropping in one watermelon seed per hole.

To prevent the Downy Mildew disease from infecting the seedlings, they also applied Nordox 75WP, a copper fungicide that contains cuprous oxide as an active ingredient. They watered the young plants from shallow wells that they had dug
around their field, and side-dressed the crop with 14-14-14 and calcium nitrate.

In order to get good-sized watermelons, they practiced thinning so each vine produced only two fruits. As a result, many fruits grew big and weighed as much as four to five kilos each. The
watermelons that they later harvested sold quickly at good prices among the owners of roadside fruit stands in the town. Clearly, their decision to choose the novelty fruits to produce in their farm was right.

ENJOYING MORE SUCCESS –  That initial experience with watermelon gratified them so much that in the 2015 dry season, the Iglesias decided to plant the crop in two-and-a-half hectares of their land, this time buying seeds of three of the Condor “Yellow Revolution” varieties.

Visitors taste a Yellisimo watermelon at the Iglesia farm harvest.

“We did not buy seeds of Golden Boy because its fruits are round,” says Larry Iglesia. “We stuck to our strategy (of growing) watermelons with oblong shapes that were new to the buyers, who liked them better.”

They also decided to stagger planting Golden Lady, Mellow Yellow, and Yellisimo so they would have an easier time selling their watermelons to the owners of roadside stands when they harvested the fruits. They also hired six workers to help them tend the fields.

Like Condor’s Golden Boy F1, Golden Lady F1 has a unique yellow rind and red flesh. The variety’s vigorous vines produce oblong medium- to large-sized fruit with good eating quality. As its seeds are the most expensive of the three varieties that they decided to grow, the brothers bought only six packets of it and did not sow these directly in their field. As advised by agronomists, they sowed the Golden Lady seeds in seedling trays filled with Klasmann Peat-based Substrate, considered the highest-quality and most reliable
seedling growing medium available in the country as it ensures high seed germination and seedling survival rates.

As for the other seeds, the brothers and their workers sowed these directly in the field: three 50-gram cans of Yellisimo and two of Mellow Yellow. This resulted in plant populations
of about 4,000 for Yellisimo and 2,800 for Mellow Yellow. For Golden Lady, they transplanted less than 100 seedlings.

Condor Yellisimo F1 vines bear medium-sized oblong fruit with the standard Sugar Baby dark-green rind but with bright yellow flesh. Each fruit weighs from 2.5 to three kilograms and has good eating quality and a sweetness that averages from 11 to 12 on the Brix scale. The variety also has a high field-holding ability and matures in only 60 to 65 days after sowing. Like their first experience with Mellow Yellow, the Yellisimo fruits that they harvested later also grew bigger than they expected after they thinned the fruits to only two per vine. With Golden Lady, they allowed the vines to bear three to four fruits each.

After the seedlings emerged, the workers watered the holesv with 14-14-14 fertilizer dissolved in water. They did this every three days thereafter. When the vines began flowering,
they added 46-0-0 to the 14-14-14 in their watering solution. They used traditional vegetable sprinklers in watering the vines.

Roadside fruit stand owners and other farmers pose with the Iglesia siblings and the Condor agronomist during the “Yellow Revolution” harvest.

Even before they began harvesting the watermelons, buyers came to offer to buy the fruits on a pakyaw basis. Agents for a big vegetable-and-fruit consolidator that supplies the big supermarket chains in Metro Manila and major cities heard about their harvest and approached them to see about regularly buying a fixed volume of the quality watermelons from the Iglesias.

Farmers and buyers from the neighboring town of Lopez also came to see their harvests and taste the watermelons. The Condor agronomists festooned the Iglesia farm with buntings, giving the place a festive atmosphere, and lectured visiting farmers about growing the “Yellow Revolution” watermelons.

Their good harvest is encouraging the siblings to improve their farm’s production further and to grow other highvalue crops as intensively as they can. It’s for this reason that they have been availing themselves of opportunities to acquire more knowhow, such as attending the agri-expos and seminars conducted by the Office of the Provincial Agriculturist in Lucena City, and other learning experiences. They even attended the first day of the two-day Third Organic Harvest Festival held by the Costales Nature Farms in Majayjay, Laguna, of which Condor Quality Seeds was a co-sponsor.