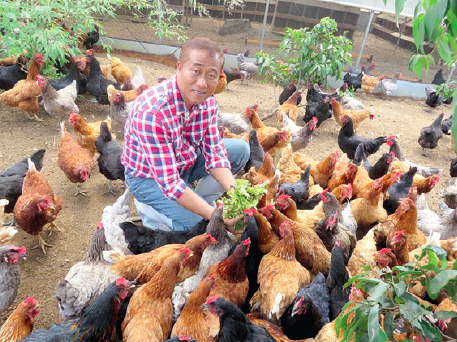 Ronald and his organic egg layers.

By Zac. B Sarian

Would you believe that a fellow who knew practically nothing about improved farming less than ten years ago is now considered the leading entrepreneur in organic farming and agritourism?

Yes, he is an accredited national provider of organic farming technology by the Agricultural Training Institute (ATI). And he is also being tapped by international agencies as speaker in foreign countries. For instance, the Asian Productivity Organization based in Japan has sent him to Sri Lanka, Malaysia, and Indonesia to lecture on his special interests: organic farming and agritourism.

On top of that, he has been receiving major awards from the government and private organizations in the last few years. The latest is the Outstanding Professional Award given by
Superbrand Marketing International Inc. for his outstanding achievements in organic agriculture and farm tourism. Before that, he was the 2012 Gawad Saka National Awardee as the
Most Outstanding Organic Agriculture Farmer. He was also a national awardee as the 2011 The Most Outstanding Organic Agriculturist of the Philippines, given by the Rotary Club
International. On April 2014, he also received the ASNA award from Pangasinan, given to outstanding Pangasinenses, for his achievements in organic agriculture development.

Who is this fellow? He is Ronald Costales, 48, the poor boy from Umingan, Pangasinan, who made good. His family owns Costales Nature Farms in Majayjay, Laguna, the first organic farm to be accredited as an agritourism destination by the Department of Tourism.

Ronald was a poor but talented boy. He came from a farm family which could not afford to send him to college after he graduated from high school at the top of his class. But he was determined to go to college. He stopped studying for two years so he could save enough to go to Manila. In
those two years, he was a jeepney driver, sometimes acting as a barker at the terminal. He was able to save enough money so that he could go to Manila, but it was not enough to keep him in school.

His degree was his passport to a much more comfortable living. He was hired by a big telecommunications company, first as a computer programmer, then after three years, he was promoted to a managerial position, climbing the corporate ladder until he was vice president of the company when he chose to retire after almost 20 years of service.

The IT company offered its employees an optional retirement package that was too good to forego, approximately three months of pay per year of service. And since he was then receiving about R 270,000 per month, Ronald took the plunge to begin a new chapter in his life.

We asked him what he did after receiving his big retirement pay. He said he and his wife spent six months traveling to Hong Kong, Thailand, and many places in the Philippines. After six months, he realized it was boring to be doing nothing important. So he thought of becoming a hobby farmer and started looking for a small farm. At first, he looked for a farm lot in Pangasinan and had actually won a bid for a foreclosed property. However, he gave that up after the owner pleaded for the chance to pay him back.

Ronald is very thankful that a neighbor suggested that he take a look at a lot for sale in Majayjay, Laguna. The lot, which was less than a hectare, did not impress Ronald at first. But the owner brought him to a nearby waterfall, and this immediately convinced Ronald that Majayjay was the place to do his own brand of farming. He also liked the mild climate of the place.

And so in 2005, he and his wife and children started cultivating their lot. Ronald admits that he had zero knowledge about growing crops although he came from a farm family in Pangasinan. For example, he said, he planted his amplaya very close to each other, like planting pechay in a plot. One day, a neighbor who saw his closely planted ampalaya suggested that he attend a seminar being given by a manufacturer of organic fertilizer right in his barangay, and Ronald willingly obliged. He was really happy he attended the seminar because he won a sack of organic fertilizer in the raffle. He applied this to his ampalaya, and the plants really reacted dramatically.

That gave him the idea to go into organic farming. But he also studied how to grow vegetables and other crops, though not necessarily the organic way at first. For instance, he enrolled in a vegetable production seminar given by the East-West Seed Company. There, they taught the conventional way of growing vegetables, using chemical fertilizers and pesticides. It was all right with him because he learned some techniques that he could use.

To pursue more knowledge on organic farming with the use of beneficial microorganisms, he enrolled at the EM Research Office in Sariburi, Thailand. That’s where he learned much more about the uses of EM in plant and animal production. He learned the art of fermenting plant juices for use as biopesticides and biofertilizers.

Ronald also enrolled in a course on vermiculture at the Center for Rural Technology Development (CRTD) in Calauan, Laguna. That more or less provided him with a well-rounded know-how on the basics of organic agriculture. In the meantime, Ronald was able to expand his
property to five hectares.

Ronald admits that there’s a big difference between know-how gained from lectures and the actual implementation of the knowledge gained from seminars.

From Hobby to Commercial

It did not take long for Ronald to realize that organic farming had a great potential as a business undertaking. His hunch was reinforced when a former purchasing director of a big chain of restaurants in Manila tasted the lettuce produced in Ronald’s farm. The visitor suggested that Ronald pay a visit to the executive of the restaurant chain, which he did.

By the third quarter of 2013, Bistro Holdings, which owns well-known restaurant brands Italliannis, TGI Fridays, Krazy Garlik, Village Tavern, Tonkatsu, and Modern Shanghai, entered into a venture with Costales for the production of vegetables and culinary herbs. These are now served in the company’s chain of restaurants under the label ‘I Love Organic.’

After the company owner tasted the sweet and crunchy lettuce grown in Majayjay, he asked Ronald to become their main supplier and stopped getting lettuce from their source in Baguio. Today, Ronald supplies about 8 tons of lettuce to the company every month.

Another company that has partnered with the Costales Nature Farms is Healthy Options, a company that distributes organic farm produce and other wellness products. Today, Ronald
is producing organic pork, organic broilers, and organic eggs for Healthy Options.

Of course, the company also buys organic vegetables from him. The company has assisted Ronald in putting up a hygienic postharvest and packing facility for his vegetables. Of course, Ronald has several other regular buyers of his organic produce. These include SM Supermarket, SM Hypermart, Makati Shangri-La, Rustan’s Supermarket, and Dizon Farms.

Joint Venture with the OFWs

Ronald has crafted unique joint venture projects with overseas Filipino workers (OFWs). Right now, he has 18 greenhouses in his 5-hectare farm. These are all financed by overseas workers from as far as Nigeria in Africa and the United States. There are also some local investors.

The scheme works this way. The OFW finances the construction of the greenhouse. Ronald, on the other hand, does the planting and marketing of the crops grown in the greenhouse.

After each cropping, the cash expenses are deducted from the total sales. The remainder is then divided between the investor and Costales. So far, the greenhouse joint ventures with several investors have been profitable, with a 140% return on investment (ROI).

Due to the lack of space for more greenhouses, there is also a joint venture for lodging facilities. For instance, the investor will pay for the construction of a lodging house. The proceeds will also be divided between Costales and the investor.

From Production to Tourism

Visitors are charged a basic entrance fee of Php200 in exchange for a tour around the farm and a plate of fresh salad with juice or fresh herbal tea.

There is a seminar on integrated organic farming in which production of various crops and animals is taken up.

What excites Ronald most is his acquisition of planting materials of Super Napier developed in Thailand. This is a very fast growing grass that is also very nutritious. With this grass, he plans to formulate fermented feeds together with locally available materials, not only for himself but also for sale to other farmers.

The admirable thing about Ronald Costales is that he is always thinking of new developments that he could profitably add to his present activities. We can expect more surprises from the
Costales Nature Farms sooner than we think.