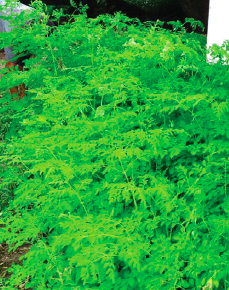 BATAC, ILOCOS NORTE The Mariano Marco State University (MMSU) and the Department of Education in Ilocos Sur (DepEd Ilocos Sur) have joined hands to promote the planting of the yard-long variety of moringa (malunggay) among teachers and schoolchildren in Region 1.

This development partnership was outlined in a memorandum of agreement between MMSU president Miriam E. Pascua and DepEd Schools division superintendent Marino S. Baytec. The two have agreed to lead their respective agencies in producing seeds of this variety which will be given free to interested elementary and secondary schools in Region 1, and to assist small-scale farmers, primary and secondary schoolteachers, and other enthusiasts in the production of malunggay seeds and seedlings.

Part of the tie-up was the establishment of seed production areas and nurseries in strategic schools in Ilocos Sur, which will also serve as models to those who may want to put up their own malunggay plantation. The two parties have agreed further to require every primary and secondary student in Ilocos Sur to plant and take care of at least three malunggay trees in their home yards and teach the children to live by the slogan “Nutritious Plant for Everyone: Live Longer and Healthy on Moringa.”

MMSU researcher Mario Remolacio is being tapped as the project leader, in place of Dr. Heraldo L. Layaoen, former MMSU vice president for planning, development and external linkages, who recently retired from MMSU. Dr. Layaoen spearheaded the propagation of the yard-long malunggay, which was brought into the country from India.

Remolacio said project aims to introduce the new variety of moringa, which has longer fruits and better eating quality than the native variety. “It is also one way by which we can promote malunggay as a nutritious plant to the school children and to expand the existing malunggay plantation in Batac, Ilocos Norte to augment the supply of fresh malunggay leaves in the region and the needs of those companies which process malunggay powder for various food products,” he added.

The project has a R1 million budget allocation from the Department of Agriculture – Bureau of Agricultural Research (DA-BAR).

As stipulated in the agreement, DepEd Ilocos Sur shall:

1)Assist MMSU in identifying elementary and secondary schools where a model malunggay farm will be established; these eventually will serve as seed production
areas for the province;

2) Guarantee the proper care and maintenance of mother plants upon the direction and supervision Remolacio and the project staff;

3)Assign teachers who will coordinate with the project leader for the distribution, supervision, and monitoring of mother plants to selected pupils or students;

4) Ensure the full cooperation of the Parent-Teacher Association of the selected school in the implementation of the project; and

5) Advocate the use of malunggay leaves and fruits in the proper nutrition of the family.
Photos on top show driedmalunggay leaves ready forpowdering, while photos belowshow its byproducts.

For its part, MMSU shall provide technical assistance to ensure the genetic purity of
the seeds, which will be produced from the production areas, and evaluate the seed
production activities in the pilot schools.

The yard-long malunggay was brought into the country in December 2005 by Beatriz Dar, wife of Dr. William D. Dar, executive director of the International Crops Research Institute for the Semi-Arid Tropics (ICRISAT) in Andra-Pradesh, India.

Beatriz Dar collected the seeds from an old village in ICRISAT, Patancheru, Andra Pradesh, and brought these to the country. Some of the seeds were given to Dr. Layaoen, who planted them in Brgy. Bungon in Batac, Ilocos Norte. In January 2006, Dar gave him another 20 seeds, and 10 of these were again planted in Batac, while the other 10 were planted in Sta. Maria, Ilocos Sur—the hometown of Dr. Dar.

Leaves of the yard-long variety are finer than the local malunggay and, according to those who tasted it, also more palatable. “The pods are fleshier than those of the local variety,” said Remolacio as he showed samples of the fruits during the signing of the MOA at the MMSU conference room.

Tests showed that the selections are three times leafier and bear fruit all year round while the local variety bears fruit only during the dry months. Thus, these attributes make the yard-long malunggay a better vegetable than the local variety.

Dr. Layaoen recalled that there was originally no intention to multiply the plants. But when people saw them and started to ask for planting materials, limited seed production began.
The survival rate of cuttings, based on his experience in Batac, is very low; he mentions that some visitors from the University of the Philippines in Los Baños cut a branch, but he never found out if it survived. The roots of cuttings tend to rot and eventually die at three months after planting. On the other hand, trees of yard-long malunggay propagated from seeds bear fruit at six months after planting.

“Thus, there is a need to produce seeds and seedlings to be distributed in strategic
locations of the country through the Technology Commercialization Unit (TCU) of the DA-BAR so that we can share the benefits derived from the improved malunggay,” Dr. Layaoen said.

Establishment of a Seed Production Farm

At present, there are enough seedlings in the MMSU nursery for a one-hectare malunggay plantation, which will serve as initial seed production area. After one year, the area will be increased to five hectares.

Selected members of the Bungon Seed Producers Multi-purpose Cooperative (BSPMC) are now being tapped to produce all the seed requirements and seedlings for those who come from Ilocos Norte. The distribution of seeds will, however, be managed by the Technology Commercialization Unit (TCU) of the Department of Agriculture – Bureau of Agricultural Research (DA-BAR) through its Regional Field Units (RFUs), or the provincial agriculturists and DepEd superintendents in the concerned province or city.

The management farm will be the responsibility of the DepEd with the assistance of anagronomist/horticulturist, an entomologist/pathologist, and two of their staff members.
Seed production farms must be well fenced. MMSU experience with the current mother plants showed that the long pods (fruits) attract the interest of passersby, which resulted in their premature harvest.

All the pods are allowed to mature and dry on the branches. Only fully dried pods are harvested in the afternoon and are hand-threshed immediately. The seeds are placed in net-bags and dried further under intense sunlight for one day, after which these are placed in jars with wood ash on top of the seeds. The seeds are repacked in plastic pending requests for shipment by those who need them.

Seeding production of mother plants will be done in a 10 meter (m) x 20 m screen house which will be constructed upon the release of funds. Seedlings will be distributed to the seed producers of BSPMC. Seedlings for the five hectare plantation in Brgy. Bungon will be the priority. After the five-hectare area is planted, seedlings will be distributed to selected primary and secondary schools in Ilocos Norte and Ilocos Sur. Seedlings for other provinces will be produced in selected pilot primary and secondary schools which offer agriculture or gardening subjects in their curriculum.

Other Uses of Malunggay

Malunggay is not only used as food but also as medicine. The mature seeds are swallowed in the belief that they can cure arthritis. In the Ilocos region, the leaf juice is used to stop the bleeding of cuts in humans and animals. It is also used to cure contusions and bruises.

Now, malunggay is promoted as a crop for health and wellness. According to Hartwell (1971), the flowers, leaves, and roots are used in folk remedies for tumors, particularly the seed for abdominal tumors. The root decoction is used in Nicaragua for treating dropsy. Root juice is applied externally as a rubefacient or counter-irritant. Leaves applied as a poultice to sores and rubbed on the temples for headaches; it is also said to have purgative properties.

The bark, leaves, and roots are acrid and pungent, and are taken to promote digestion. The oil is somewhat dangerous if taken internally, but is best applied externally to treat skin diseases. The bark regarded as antiscorbic and exudes a reddish gum with properties called tragacanth, a compound used against diarrhea. The roots are bitter and can act as a tonic to the body and lungs.