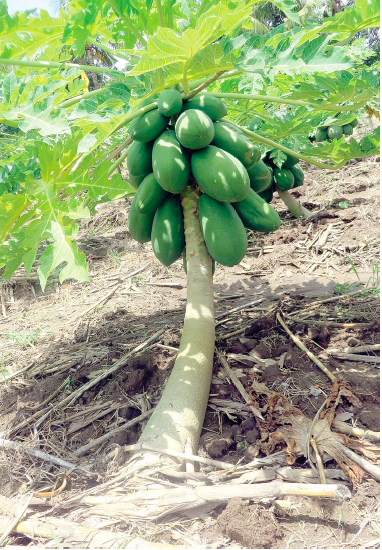 There are different ways of disseminating improved farming practices. One activity that we attended recently, which we think is a very effective way of sharing the latest techniques in growing crops, was the Papaya Expo organized by the East-West Seed Company.

This was in the papaya plantation of Jeff Arabelo, 68, in Brgy. Sagasa, Bago City in Negros Occidental. The venue was ideal because the papaya trees are heavily laden with fruits that are just several inches above the ground. That could have easily convinced the 125 farmers who attended that indeed hybrid papaya can be a moneymaker.

The organizers of the expo also had a smart way of conducting the event. They put up tents in five different sections of the plantation in such a way that the attendees had the chance to cover the entire plantation.

At each station, an expert was detailed to explain a particular topic, complete with posters as well as actual specimens. The attendees were divided into five groups. Each group followed their assigned leader to their first designated station. After that, they proceeded to the four other tents to listen to the explanations of the other experts.

In our case, our group first proceeded to the tent manned by Jason Villegas, who discussed the sexual expression of the papaya plant. He explained that there are two sexes of the papaya that bear fruit.

One is the true female tree. This has flowers that have an ovary but no pollen, so their flowers have to be pollinated by pollen-bearing flowers.

The pollen-bearing plant that usually provides the pollen needed by the female papaya is the “bakla” or hermaphrodite. This has both an ovary and pollen.

Villegas explained that the “bakla” is less stable than the female papaya. Aberrations like ‘catface’ and ribbing of the fruits occur, especially when there are weather problems, like when it is too hot, the soil is too dry, and the plants are not watered. The ‘catface’ fruit does not have the usual symmetrical shape of the papaya fruit.

Despite the supposed instability of the “bakla” papaya, consumers prefer the fruits of the hermaphrodite. The hollow of the fruit is smaller than that of the female tree. That’s because the “bakla” has oblong fruit while those of the female are roundish.

Papaya has a third sex, and that is the true male. It produces flowers that don’t develop into fruits. This was not discussed in the expo.

One station in the expo was manned by an expert in pests, diseases, and other problems. At this One recommendation is to plant resistant varieties like the station, we were briefed about the most destructive enemy of new hybrids.

Another is to control the aphids that spread the papaya, and that is the ring spot virus. This is the disease that virus. One other way to avoid this disease is to plant in awiped out the papaya industry in Cavite many years back. The place where no infected papayas have been grown in previousexpert detailed how this can be avoided.years.

Other destructive diseases are phytophthora and anthracnose. One way to avoid these is to provide good drainage and have a clean culture. Also, good nutrition is necessary to make the plants strong and resistant to stresses that could make them susceptible to diseases.

The Varieties, Their Characteristics

At one station, the assigned expert described the characteristics of the different hybrid papayas in the market. Of course the expert emphasized the advantages of planting the red-fleshed Red Royale and the yellow-fleshed Cariñosa developed by East-West plant breeders. They are both low-growing, high-yielding, and of good eating quality. They can also withstand strong winds better than the tall varieties.

Ailyn Infortuno, an expert in producing seedlings in the home office of East-West, was brought to Negros to do the demonstration for producing healthy papaya seedlings.

One trick she disclosed was to soak the papaya seeds for five days before sowing. However, the water should be changed every day. That will make the seeds sprout immediately.

She also demonstrated how to sow the seeds in a seedling tray, using a sterile medium that consists of coco coir dust, river sand, and carbonized rice hull. She also disclosed what fertilizer to use and when to apply. In 40 days from sowing, the seedlings should be ready for field planting.

The last station was manned by an expert in land preparation, planting, care of the plants in different growth stages, and harvesting.

Harvesting usually starts 7 to 8 months after transplanting. To avoid fruit fly infestation, harvest the fruits when a tinge of yellow starts to appear between the apical ridges. The harvested fruits should be placed in a padded container to minimize bruises.

All in all, it was a complete menu for producing a bountiful harvest from a papaya project.

Lessons from Fish Farmers in Pampanga