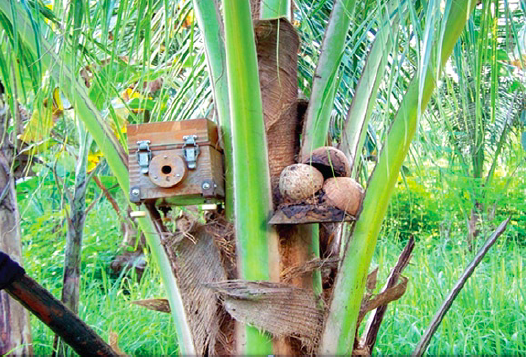 A box and coconut shells are home to stingless bees.

Meet a lady who is the pioneer researcher on stingless bees and is promoting the culture of the same as a source of income, especially among poor farmers in Bicol.

By Zac. B Sarian

She is Dr. Maria Dulce J. Mostoles, the director of the Regional Apiculture Center based at the Central Bicol State University of Agriculture (CBSUA) in Pili, Camarines Sur.

Her passion has been duly recognized. At the recent national scientific conference of the Pest Management Council of the Philippines in Cebu City last May 6-9, her presentation won the “Best Paper Award.” She discussed her observations on and experiences with Stingless Bees in that presentation.

Little Known to Many People

Stingless bees are native bees that few people know about. They produce less honey than the conventional Italian bees that are cultured worldwide, but Dr. Mostoles has observed a number of good reasons why they should be propagated by more people.

For one, they are not as expensive to culture. They don’t need very sophisticated housing like the Italian bees. In fact, discarded boxes of different shapes and sizes as well as coconut shells are suitable for culturing stingless bees.

Although they produce less honey, the honey of stingless bees fetches a higher price than those currently produced in commercial bee farms. A colony with 5,000 or more workers can yield about 300 milliliters (ml) of honey in three months, which is worth Php300.

Stingless bees also produce a lot of propolis, which commands a price of Php800 to Php1,000 per kilo. The buyers are makers of wellness products because propolis is said to have anti-fungal properties.

Stingless bees produce a lot of wax, which is also utilized in making cosmetic and wellness products.

The bees also gather a lot of pollen, which is a nutritious food supplement that sells for R1,500 to R2,000 per kilo, according to Dr. Mostoles. And the bees are efficient pollinators of fruitbearing plants, including vegetables and fruit trees.

Failure Due to Greed

As early as 1995, Dr. Mostoles, who is an entomology graduate from Los Baños, began working on honeybees, starting with the laywan or the native bee. She remembers helping an investor who raised the Aphis mellifera. He was at first successful but the project died a natural death due
to greed.

She pointed out that the owner collected all the pollen that the bees gathered from the wild, and sold this to buyers from Manila. He didn’t leave any of the pollen for the bees to feed on.

Dr. Mostoles is proud to say that she has encouraged many stingless bee raisers. And she has observed that many of them have developed their own housing systems. One of them is a Japanese national who came up with a double layer box as housing for his bees.

Many of them, however, simply use coconut shells as their main housing. That is just right for many families who can’t afford to buy sophisticated housing. Some just perch the housing on trees, including coconut trees.

Dr. Mostoles mentioned Eriberto Abad of Goa, Camarines Sur as being one of those who trained under her, along with his son, in 2001. They now have about 200 colonies and are selling honey and nucleus colonies. Nucleus colonies sell for more than a thousand pesos each.

Dr. Mostoles has also encouraged her husband Joseph to combine dragon fruit and stingless bees. Starting with 25 colonies in 2010, he now has 400 colonies.

She also mentions Marito T. Bernales, a former president of CBSUA, who placed 40 colonies in his coconut plantation in Pamplona, Camarines Sur. He has observed that the yield of his coconuts has increased by 30 to 40 percent because of better pollination.

Students have also been encouraged to go into stingless bee culture. One of them is Raymond Villadares of Milaor, Camarines Sur. Starting with 6 colonies in August 2013, he has 18 colonies today.

Other stingless bee culturists who were encouraged by Dr. Mostoles include Rufino Quiapo, a retired navy captain; Reydel Riorizo and Peter Pontillas, students who started their own project after their practicum; and Johnny Monforte, who has two bee farms in Pili and in Daet, Camarines Norte. There are several more who come from all over Bicol.

While encouraging more people to go into stingless bee culture, she is also very active in convincing hunters not to over-exploit the bee population in the wild. She is conducting teach-ins on the right way to harvest colonies from the forests.

Dr. Mostoles would also like to study the species of stingless bees in other parts of the country if she could only avail herself of research funds from the Department of Agriculture or some other agencies of the government. She realizes that apiculture is not a priority of the Department of Agriculture but she is undaunted in pursuing her passion.

WNC Projects Turns Plants into Art at the Manila Biennale