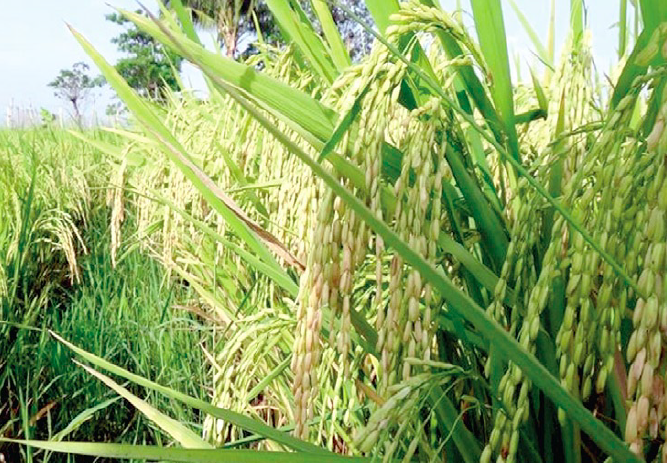 One of the most effective ways to supplement the nutrients needed by the plants is through foliar feeding, or the technique of applying liquid fertilizer directly to the leaves, through the stomata where nutrient absorption takes place 8 to 10 times faster than that of soil fertilization.

The veracity of foliar feeding was validated by scientific studies conducted in the 1950s by Dr. H. B. Tukey, a renowned plant researcher and head of the Michigan State University Department of Horticulture, with the use of radioisotopes as tracers.

Studies show that among the advantages of foliar fertilization are: the quick absorption of nutrients, the quick addressing of nutrient deficiencies; a reduction in the amount of fertilizer needed as compared to soil application and in the amount of fertilizer wasted; the efficient uptake of water; and the stimulation of nutrients in the soil. Also, nutrient uptake by the plant does not depend on the right soil pH as the nutrients that are rendered unavailable by incorrect soil pH can be absorbed through foliar feeding.

One foliar fertilizer which, in recent years, has been getting a positive reception from local farmers is Power Grow, which has been shown to help increase crop yield by a minimum of 30 percent and to cut the need for inorganic fertilizers by 25 to 100 percent.

According to June Lalog of Dynapharm Philippines, which has distributed Power Grow (which originated in Malaysia) in the Philippines since 2011, this foliar fertilizer contains soluble macro and micro elements, Acadian seaweed extract, and humic acid—all of which are readily absorbed by the plants for optimum growth.

How It Works and How It’s Used

Lalog explained that Power Grow works by increasing photosynthetic activity in the leaves, stimulating the need for water by the leaves. Thus, there is an increase in water uptake by the plants’ vascular system, which in turn increases the uptake of nutrients from the soil.

Power Grow was approved by the Fertilizer and Pesticide Authority and can be applied to rice, corn, vegetables, strawberries, dragon fruit, plantation crops, and fruit-bearing trees.

“For rice, Power Grow is applied starting from land preparation up to fruiting stage to achieve best results,” Lalog said. The general recommendation is 1 liter per 200 liters of water for a one-hectare area. It is applied in tandem with Power Grow Green, a growth booster that stimulates and promotes the growth of roots, stem, leaves, and new buds which is applied during vegetative phase, and Power Grow Red, a fruit and flower enhancer applied during the reproductive phase.

Power Grow is initially applied to rice at a rate of 1 liter per 200 liters of water or 80 milliliters (ml) per tank load or 16 liters of water, starting at seedbed preparation. Following the recommended dilution ratio, soak the seeds overnight in the Power Grow Green and water solution, enough to cover the all the seeds. After soaking, the remaining solution can be applied as basal fertilizer during final land preparation. Lalog recommends that foliar fertilizer be sprayed during early morning, between 5:00 AM to 9:00 AM, and late afternoon between 4:00 PM to 7:00 PM, when the stomata of the leaves are open.

Lalog however said that the results from using Power Grow, especially on rice, cannot be fully achieved right on the first cropping as the soil will undergo a so-called transition period.

In the first cropping, for instance, Lalog said that farmers who have used Power Grow on their crops attested that they achieved an initial 30 percent increase in yield. For first time users of Power grow, Lalog recommends a combination of both 100 percent Power Grow and 100 percent inorganic fertilizer.

Alfredo Valdez conducted an experiment to show the difference between rice crops grown using Power Grow and those grown without it on his one-hectare (ha) rice farm in Cabulay, Santiago City from May to August 2011. Power Grow-treated rice yielded 185 cavans weighing 57 kilograms (kg) per cavan for a total of 10,545 kg. On the other hand, the untreated rice yielded 135 cavans at 52 kg per cavan for a total of 7,020 kilos. This represents a 3,525-kg yield difference, or an almost 50 percent increase in production per hectare.

Moreover, Alfredo spent a total of R7,400 on fertilizer inputs using Power Grow, as compared to R14,400 with conventional farming using inorganic fertilizer; this represents a savings of 48.8 percent.

Another rice farmer who benefited from using Power Grow is Susan Doctolero of Solana, Cagayan. Her wet season rice crop on one-hectare farm in 2011 gave her 8,990 kg or 155 cavans weighing 56 kilos per cavan. This is 81.98 percent higher than her previous yield of 4,940 kg using conventional methods. In terms of fertilizer cost, Susan enjoyed 36.5 percent savings as she applied 4 sacks of organic fertilizer, 2 liters of Power Grow Green, and 2 liters of Power Grow Red for a total of Php 6,100, whereas the 8 sacks of organic fertilizers she applied previously cost her R9,600.

Likewise, a technology validation led by Dr. Nenita Dela Cruz of the Central Luzon State University (CLSU) on the use of Power Grow in combination with inorganic fertilizer in increasing yields of rice and corn from December 2011 to March 2012 showed positive results.

From the usual 60 to 80 cavans/ha of rice yield using conventional methods, an inbred rice demonstration crop at CLSU yielded 135 cavans/ha with the combination of Power Grow and inorganic fertilizer. In the corn demonstration planting of Juanito Rama in San Manuel, Tarlac, corn plants applied with Power Grow yielded 15.64 tons/ha, while untreated corn yielded 11.92 tons/ha for a difference of 3,720 kilos/ha, according to Dr. Dela Cruz’s report.

Likewise, Power Grow has also been proven to help increase yields of vegetables by 30 to 100 percent, and that of fruits by 50 to 100 percent. One Power Grow user who planted patola on a three-fourth hectare area in Quezon, Nueva Ecija harvested after 32 DAP an average of 1,060 kg of marketable patola fruits every other day.

Aside from the increase in yields brought about by robust growth and bigger fruits, farmers who have tried Power Grow observed an increase in their crops’ resistance to insect pests and diseases due to the presence of hormones like auxins, cytokinins, and gibberellins. Power Grow also acts as a soil conditioner, improves soil’s water holding capacity, neutralizes soil acidity, and helps restore the balance of the microorganism population in the soil.

Lalog said that Power Grow is economical to use. A liter of this, which is good for a one-hectare application, costs Php810. It is also available in 1-gallon and 4-gallon packaging, costing R2,050 and R7,000 respectively, which results in more savings to the farmers. By the way, a tank load, which requires a dosage of 80 to 100 ml, is good for a 500- to 800-square meter application.

Experts remind users, however, that although foliar fertilization is more advantageous than root application
since it can overcome nutrient limitations under adverse soil conditions, it should not be considered a substitute for proper soil fertilizer management. Instead, foliar fertilizer is recommended to supplement soil fertilizer, allowing farmers to correct nutrient imbalance and stimulate increase in nutrient root uptake. Considering this, DynaPharm agriculturists suggest that Power Grow liquid foliar fertilizer be used in conjunction with organic granular fertilizers to achieve the desired results.

At present, tests are being undertaken on the application of Power Grow for aquaculture and livestock, from which initial findings have been found to be promising, Lalog said.

WNC Projects Turns Plants into Art at the Manila Biennale