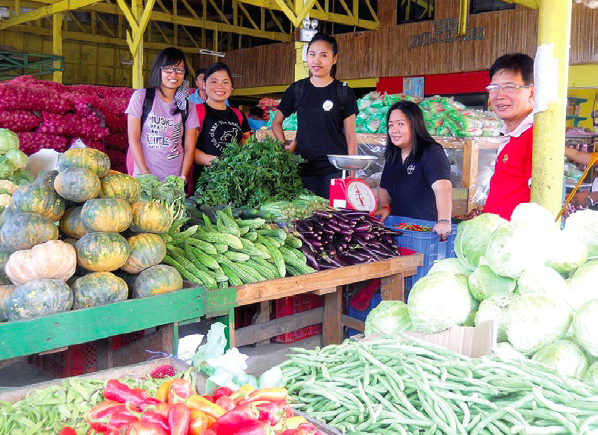 Some time ago, Antonio Quintos of Brgy. Tumana of Sta, Rosa, Nueva Ecija sold a truckload of calamansi harvested from his 3-hectare farm to buyers in Bicol. The price of calamansi then ranged from R10-R12 per kilo, while in Nueva Ecija, the farmgate price was about half that, which meant he made a good profit from the deal. On the way back, he decided to backload locally harvested eggplants in the hopes of earning extra income.

But upon opening the containers of the vegetables on the return trip, Quintos found to his dismay that the eggplants were discolored and might not be saleable at all, so he sought the help of a townmate with some influence and contacts in Divisoria. That townmate saved the day for Quintos, as within 14 hours, the defective vegetables had been sold.

His benefactor? Leah M. Cruz, the reputable ‘godmother’ of vegetable producers, small vendors, and traders of the Divisoria market.

The 39-year-old lady is married to Meynard Cruz, who is in the transport business. She is a vegetable farmer from Sta. Rosa, Nueva Ecija who learned the ropes of the vegetable trading business as a child when her parents regularly took her to Divisoria to deliver vegetables harvested from their own farm in Sta. Rosa. She practically grew up in the Divisoria market, where the family owns five market stalls engaged in the wholesale and retail distribution of fresh vegetables and spices Even during high school and in her college days at the Lyceum of the Philippines where she took up commerce, Cruz considered Divisoria to be the turf of vegetable producers and traders. Other known trading centers pale in comparison with the extent and volume of business in Divisoria, says Cruz.

It’s no surprise that she practically knows everyone engaged in the vegetable trading business in the area, from the honest to the dishonest, the legal and the illicit, from canvassing agents to the baggage boys. Her influence and contacts in Divisoria grew over the years. Cruz led and organized a motley group of small vendors, traders, vegetable importers, and exporters in 1998, and this was the forerunner to the formal organization and registry of the Vegetable Importers, Exporters and Vendors Association Philippines, Inc. (VIEVA) with the Securities and Exchange Commission (SEC) in 2012.

Cruz confides that even before VIEVA was organized, there were two factions controlling vegetable trading in Divisoria: the Divisoria group, mostly composed of small vendors and traders, and a group from a nearby district, which is more influential and heavily financed. She claims that the latter group can influence the supply and demand of vegetables, and that the other group is capable of allowing vegetable products to rot in storage to create an artificial shortage only to jack up prices the next day.

The Divisoria group, through Cruz’s dedicated leadership, was organized primarily to neutralize the other group and create a balance of influence in the vegetable trading business while providing a better deal for vegetable producers in the countryside.

Today, VIEVA Phil. Inc. is composed of members engaged in legitimate business: 28 vegetable importers, ten exporters, 200 small vendors and traders, and some 100 cooperative groups and farmers associations. Its influence in the vegetable trading business is beginning to be felt. Members of VIEVA come from 16 regions of the archipelago, from Batanes to Tawi-Tawi.

A coordinating center was established at Cruz’s home base at Sta. Rosa, Nueva Ecija. It is the activity hub where linkages and market transactions among group members are created, dealt with, and finalized. Cruz serves as the trusted conduit for different sectors involved in the vegetable trading.

Many farmers and their leaders testify that the effective coordination among the member groups
in VIEVA improved their lives. One of the main objectives of VIEVA is to identify areas with surplus production of a particular item and to match this with a market from areas with lower production of the same item. Direct coordination between vegetable producers and traders helps lessen the influence of middlemen, Cruz proudly says.

Cruz believes that there is no real insufficiency in vegetable production in the Philippines; the only limiting factor, she says, is distribution.To achieve a fairer distribution of goods, she advocates the concept of a barter system.

Leah Cruz before a mountain of garlic which came all the way from the Ilocos region and
Batanes area. With the use of technology, the size of garlic has slowly increased and can be
stored for longer periods.

Education and Other Solutions

One example of VIEVA’s successful group coordiation helping with an existing challenge can be seen in how they helped address the marketing problem of the United Fishermen Multipurpose Cooperative of Basilan, which was having a hard time marketing their dried fish. Cruz coordinated with the Katipunan ng mga Samahang Magsisibuyas ng Nueva Ecija (KASAMNE) for them to absorb the dried fish in exchange for supplying the fishermen with onions, without any cash involved. Both the groups of cooperatives profited from the cashless deal.

One of the most common mistakes in the farming community, Cruz observed, is the tendency of farmers to overproduce. Once a particular crop, for example, earns a profitable income for a season, hundreds of farmers will plant the same crop the following season. The volume increment creates an oversupply and sends prices plummeting down.

Cruz’s vision is to know the demand for farm goods in particular areas in order to recommend a production volume that will not create an oversupply in the market for a particular item. With VIEVA’s extensive network of producers and traders, VIEVA is able to determine this within their own network during their monthly meetings.

VIEVA members now have the capacity to export local products to countries in need of them and continue to do research on products with export potential. The lowly achuete (annatto) from Davao and North Cotabato has found a market in Guam, Hawaii, and Vietnam. Yellow Granex onions are exportednby the National Onion Growers Cooperative Marketing Association, Inc. (NOGROCOMA) and the Katipunan ng Samahang Mag-sisibuyas ng Nueva Ecija (KASAMNE) to Japan, Malaysia and Singapore.

Black, brown, and aromatic rice are now exported to Dubai, UAE, China, and Singapore by the Magtutumana Cooperative of Sta. Rosa, Nueva Ecija and the Firmus Farm Services Providers’ Cooperative. Ginger from Nueva Viscaya and Oriental Mindoro is exported to Pakistan. Shallots (sibuyas Tagalog) are exported to Indonesia, Malaysia, and Singapore. There is a demand for hot chili peppers, both in fresh and powder form, in Singapore, Guam, and Hawaii.

Cruz happily harvests calamansi from an orchard at the Magtutumana
Vegetable Producers Cooperative. Calamansi is one of the preferred
products of the co-op, aside from tons of pinakbet vegetables which
are produced regularly by farmers and brought to Divisoria almost daily.

VIEVA is likewise into research and technology. One of the problems of garlic farmers from Batanes and Ilocos is that they cannot stock garlic for long periods as bukbok (termites) usually attack the garlic while these are in storage. To control bukbok, some VIEVA farmers shared with Cruz that all they needed was a hermitically sealed canopy infused with carbon dioxide, with lagundi leaves alongside it. This worked.

Minority members of the Cambunang Bagong Sikat Farmers Association from Bulalacao, Oriental Mindoro were taught to plant vegetables, onions, and garlic instead of the traditional ginger and root crops. They are now reaping the fruits of their alternative crops.

As Cruz looks back at what she has accomplished, she savors the joy and fulfilment of helping to substantially increase farmers’ incomes through the influence of VIEVA. Farmers can now identify what crops to plant, the volume to produce, and the demand for a particular crop though VIEVA’s vast network of clientele. Exporters and traders are now more competitive, especially given the fewer tariff requirements of the WTO over the next two years. VIEVA has definitely found a way to break the hold of unscrupulous traders who had victimized its members for years, thanks to the consummate vegetable producer and trader who had the vision to identify the problems in the countryside and do something about them.

This appeared as “Meet the Consummate Vegetable Producer/ Trader of Divisoria” in agriculture Monthly’s July 2014 issue.