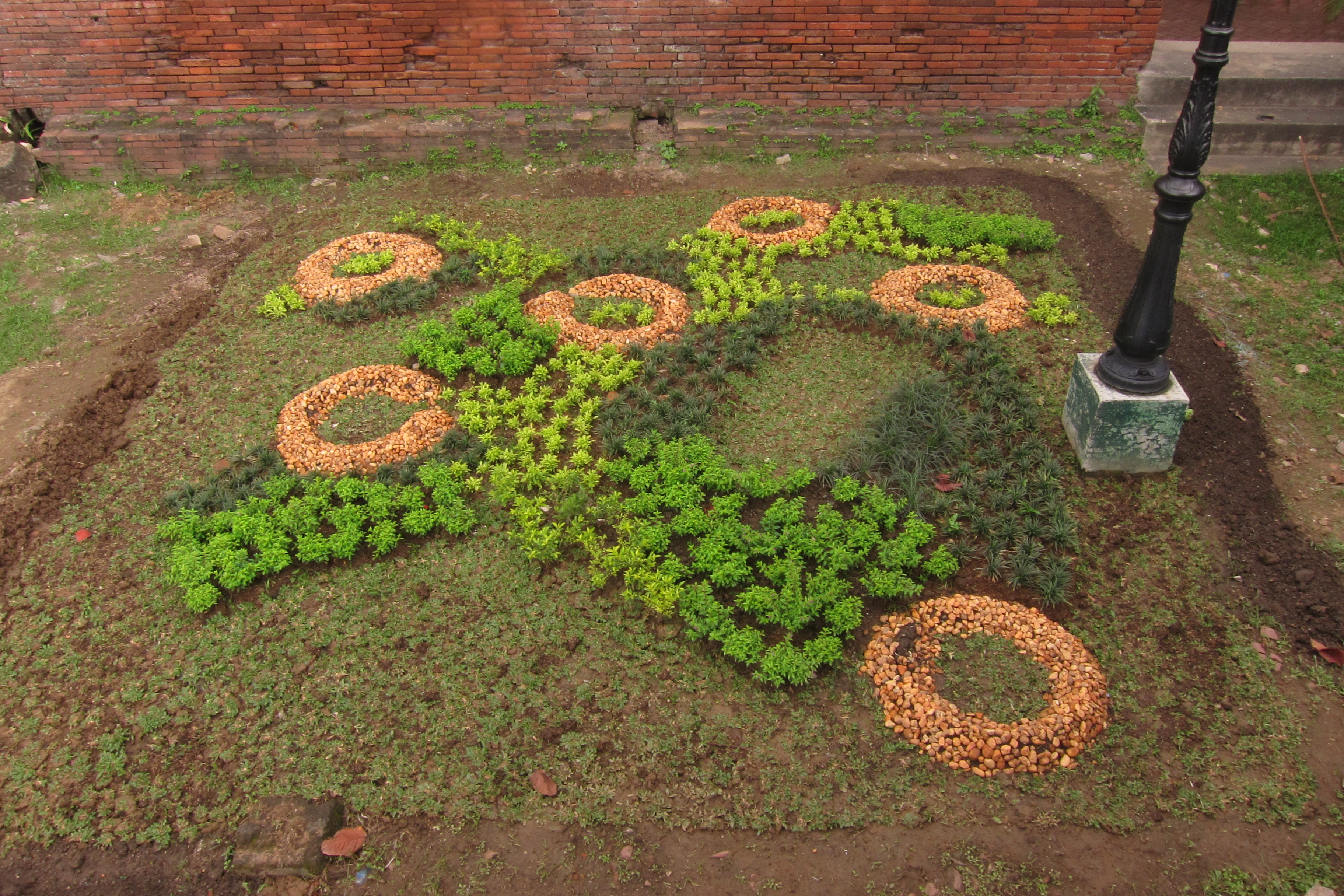 At first glance, artist Lena Cobangbang’s piece for the Manila Biennale looks like part of Fort Santiago’s greenery. Turf Wars is composed of “a carpet-like surface made from different varieties of weeds and grass forming a camouflage pattern” reminiscent of “contested islands located in the West Philippine Sea.” The artwork itself is camoflaged behind some of the Fort’s ruined walls.

What are you currently up to?

I’ve just finished setting up a watercolor show “Between A Puddle and The Ocean” which opened last Friday 23 Feb at Galerie Roberto in Molito Alabang, and put down my solo show Terratorial Piecings at Mo_Space at The Fort, BGC. Now, we’re preparing for ARTbike 2018 on March 3 which will tour Manila Biennale, National Museum and Art Fair Philippines.

What attracted you to working with plants?

I guess it’s borne from a frustration of not being able to grow one, hahaha. But seriously, I’ve been invested in doing works about land, no matter the medium – watercolor, photography, miniatures, food, embroidery, molds, etc. Plants are one of a current decoder/signifier of this bigger focus on land.

Please tell us what inspired your piece at Manila Biennale.

Prior to working on my piece for the Manila Biennale, I was finishing pieces for my solo show Terratorial Piecings where I’ve used camouflage patterns for my version of a world map, and for deconstructing HR Ocampo. Most pieces there came about from reading up on his working process and from seeing his preparatory studies.

I was trying to see how/why he came up with such patterns. There was one HR Ocampo piece which I related into property divisions, land use, etc. The camouflage pattern is very much a loaded form actually. So when Ringo Bunoan, the head curator of MNL BNL, gave us a tour of Fort Santiago, I instantly thought of doing something also with the current issues on the contested islands on the West Philippine Sea.

I was also thinking of making a work that I won’t have problems with storage, which happens with most works done with the usual medium. I did several pieces before using organic material and/or making a sort-of garden. I’ve attached photos of those as well here. One was a moss and bread mold piece I did for my solo show in Graz, Austria; it’s called Ambrosia.

My host’s mother and I trekked up some hills just to gather moss, and did a Julie Andrews on top of one hill hahaha. The other one titled Garden of Earthly Delights was done on a residency in Langgeng Art Foundation in Jogjakarta, Indonesia. The foundation had a sprawling lawn so I thought of digging up a shallow grave of a silhouette of a figure lying down with its innards spilt with flower petals that were used for funerary offerings. I did a similar one in last year’s Malasimbo festival.

What do you hope for people to experience upon encountering your piece?

That they’d think about what’s at stake in the issue of the West Philippine Sea, about geopolitical divisions, about sovereignty, about land, about environment, about the ground that they walk on, about plants that they may or may not take for granted.

Are you a gardener yourself? What is your relationship with plants?

I hope I am, maybe with a lot more practice I can be but I know some people are just born with a green thumb. This piece would not be possible without my collaborator/landscaper John Albao of Juan’s Garden and Landscaping.

Since I’m born and grew up, and still living in a very urban environment, there’s this constant longing for wide open space and greenery. Plus, the tree walk that was hosted by Ronald Achacoso, an artist who takes up the advocacy of Leonard Co, was a jolting wake-up call on how very few we now have of our forest cover, and how very little most of us know about our own plants, we can’t even name most of the trees and common shrub that we pass by. I actually felt guilty of this and sad. But looking at plants is very calming, walking through gardens and green paths is very calming, that I wish instead of building towers and high rises, trees are planted instead.

What do you wish for Metro Manila, greenery-wise?

More trees instead of buildings, more parks, instead of malls and car parks. But this won’t be possible if there’s no smart planning. I feel frustrated every time Paulo Alcazaren mentions that in his columns or on his FB posts, that the solutions are actually obvious but no one’s acting on them. I guess profit wins most of the time, that’s why malls and hi-rises eat up most spaces without considering humans who inhabit them. Developers seem to think of plants/greenery as mere decor or afterthought, they don’t plan walkways that have natural shade. John, the landscaper, even commented that most plants that were planted along the public roads and parks are very ill-suited, and badly chosen,e.g. the Dieffenbachia maculata planted in the periphery of Intramuros is actually poisonous.

There are so many capable people who doesn’t get hired or consulted upon for public project/government projects. That seem to be the sad story of our lives as Filipinos, that we don’t seem to deserve nice things. 🙁