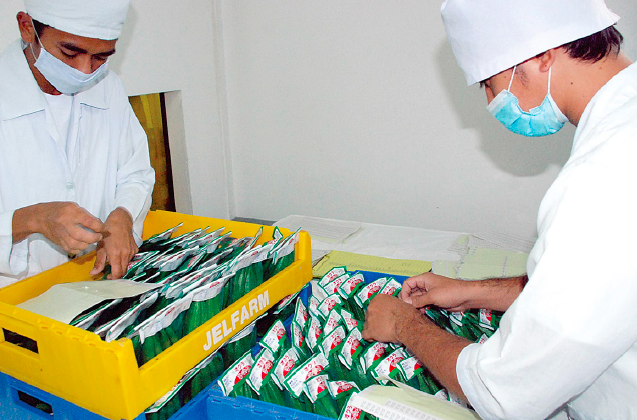 It took a Japanese National, Tatsuji Matsuaka, and his Filipina wife Helen from San Isidro, Lapaz, Tarlac to begin the export business of fresh okra (Hibiscus esculentus) about three decades ago.

They started with four hectares as an initial investment, providing the technology and cultural requirements to preselected contract growers. Even from the start, the businessman in Matsuaka had an eye on the potential of the okra export business to Japan.

The fresh okra for export industry in Tarlac province has now burgeoned to become worth Php680 million (in annual income), producing some 4 million metric tons of fresh okra a year. Over a thousand farmers and contract growers in almost the same area are involved in its production, employing 5,000 others as pickers, sorters, and packagers.

Seven processing centers have been established, while there are 16 accredited exporters and two provincial cooperatives.

The export of fresh okra to the Japanese market requires not only a huge investment but also a full-time and labor-intensive culture and maintenance that runs from Php150,000-Php175,000 per hectare.

But an exporter can gross a minimum of Php360,000 per hectare for a minimum net income of over Php100,000 per hectare. In Tarlac City and in other parts of the province, land preparation for okra farms usually starts in late September to the middle of October. This is normally done after the harvest of the wet season rice crop. In some places, however, okra is planted from small patches of fallowed land.

Land preparation starts with three passes using a 4-wheeled tractor with a disc harrow at weekly intervals. After the final harrowing, the land is applied with ten bags of dried chicken manure, organic fertilizers, or vermicast, four bags of 14-14-14, and two bags of urea. The okra seeds are planted in furrows of ten meters. A carabao-drawn plow is used to make shallow furrows. Seeds are planted at one-meter intervals between hills. This will yield at least 300,000 seedlings per hectare. This will be thinned later to achieve a minimum plant density of 100,000.

Investors use the 4-cornered okra as it is the recommended variety. The imported hybrid okra seeds cost Php6,000 per kilo, and each hectare requires 8-10 kilos worth up to Php60,000 per hectare. Lately, however, investors have learned to just buy a kilo of seeds and to plant these in a smaller area as a source of the F1 variety, which is used for planting for the next season.

Regional RFO-III High Value Crops Development coordinator Fernando Lorenzo says that this practice is not unusual when it comes to economizing with seeds. Although the okra F1 seeds may decline in production by at least 25 percent, this can offset the investment cost. F1 seeds cost R300 per kilo, which is more acceptable to farmers and investors. The quality is retained and acceptable at the importers’ end, adds Lorenzo. The average yield per hectare in Tarlac ranges from five to six tons.

A month after planting, off-barring is done on the field to control weeds. In some places however, plastic covers are now used in plots to help maintain moisture and control weeds. Another set of four bags 14-14-14 and two bags of urea are applied after off-barring. This is followed by hilling up which is repeated at least six times during the growing period.

The okra pods are ready for harvest 45 days after planting. Harvesting is done at least twice a day to avoid producing oversized pods, which are rejected by importers. Peak harvesting comes in 60 days. When the volume of harvest declines, okra can be ratooned by cutting close to the base. Ratoon crops can extend harvesting for another 60 days. The harvested okra pods are immediately delivered to the processing centers for quality control.

One of the more prominent processing centers in Tarlac is Jelfarm, the trade name of the Tarlac Okra Grower Cooperative, organized in and operating since 2004. Lakbay Aral visitors are often impressed by the modern facility, which is the only processing center in Tarlac City that conforms with the requirements of an ideal processing center when it comes to phytosanitary standards. All workers are required to wear masks and rubbersoled boots or sandals before working inside the facility.

There are three stages in washing the pods, and the third cycle ends in an icecold soaking before the pods go to the sorting and packing section. Pods with stains or physical defects, and oversized pods are rejected. The standard size of fresh okra for export is from eight to 10 centimeters (cm).

Pods that pass quality control are placed in a one-kilo mesh bag. Four of these mesh bags are placed in standard export cartons for shipping to importing countries. Jelfarm’s daily output is 1,500 boxes or 8,000 kilos.

Distinct and identifiable cartons are a requirement for fresh vegetables exported to Japan.

Four days before the pods are picked, technicians from the Bureau of Plant Industry under the supervision of Japanese consultants take random samples of the pods to determine the maximum residue level (MRL). The Japanese import requirement for vegetables is a residue level of 0.5. If the exporter passes the MRL test, the exporter is issued a Phytosanitary Certificate.

With almost three decades of okra farming experience, the province of Tarlac will probably hold on to the title of the Fresh Okra for Export Capital of the Philippines.

This appeared as “Fresh Okra Export: The Sunshine Industry of Tarlac” in Agriculture Monthly’s July 2014 issue. No author credited.

Virgilio Gaudia Has a Unique Way of Producing Basi and Vinegar