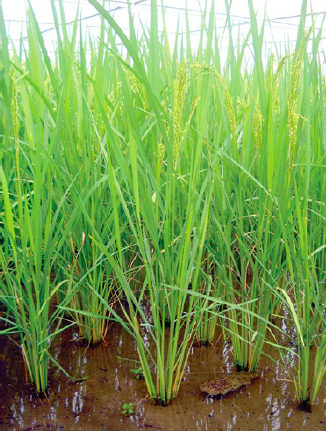 Exploring the benefits of biofortified rice.

Janice Nilo-Recometa , 32, mother of one and an overseas Filipino worker in the United Arab Emirates, lives with her family abroad. At mealtimes, she serves them steaming white rice, even if they have an abundance of international food choices.

On each payday, her grocery basket includes two 5-kilogram packs of Jasmine rice that she buys from the nearest grocery store at 5 dirhams or 60 pesos per kilo. Jasmine rice is a favorite choice among rice lovers, particularly in Asia, because it is tender, exudes a sweet scent, and is mild in flavor when cooked. Janice is aware of the health benefits of brown rice, but she said it has a certain texture in the mouth that just doesn’t quite satisfy her family’s tastes.

Theirs is a typical Filipino family, accustomed to eating polished rice. Most Pinoy rice consumers, like Janice and her family, still favor white rice, seeing it as the more palatable and fashionable staple and choosing it over the healthier unpolished and halfmilled rice varieties. This preference is even more marked among upscale consumers—and it is something that scientists are working to change.

Research shows that polished rice grains lack nutrients that are present in the outer (bran) and inner (germ) layers of rice, which are ripped off in the refining process. Among the nutrients that are stripped along with the bran layers during milling are magnesium, manganese, zinc, and iron.

The loss of these micronutrients, particularly zinc and iron, has become a global concern especially in poor nations suffering from zinc and iron deficiencies. Both iron and zinc are essential elements for human health, and are to complete bodily functions and highly complex processes that are indispensable for survival, such as the production of red blood cells and the transportation of oxygen throughout the body.

According to the Philippines-based International Rice Research Institute (IRRI), micronutrient deficiency is widespread in countries where rice is the staple food. Regarded as the most pervasive form of malnutrition and a leading cause of anemia, iron deficiency has affected the health of millions of women and children in particular.

The World Health Organization estimates that a staggering 2 billion people or over 30 percent of the world’s population are affected by iron deficiency. Thus, one important item in the IRRI’s research agenda is to address this global concern. IRRI develops healthier rice with more nutrients to significantly contribute to worldwide interventions that aim to reduce micronutrient deficiencies and improve the nutrition of rice
consumers.

This agenda is realized through biofortification. Biofortified rice is nutrient-rich rice. Biofortification can help poorer groups in society gain access to nutritious food that they would otherwise not be able to purchase because of the lack of resources. Dr. Jessica Rey of the Plant Breeding, Genetics and Biotechnology Division (PBGBD) of IRRI said that conventional breeding methods were not successful because there are no donor rice germplasms with exceptionally higher levels of iron. Genetic modification thus becomes the more applicable method, she said.

Using biotechnology as a tool, the rice is genetically modified (GM) to insert a gene or genes that exhibit the desired traits (in this case, iron) into its genetic makeup, explained Dr. Rey. The same method, she said, has the added benefit of enhancing the zinc content of the rice grain.

“We encourage the rice plant to absorb more minerals from the soil, to take them all up and distribute them evenly to the plant with a concentration of more minerals into the grain so that even after milling, the minerals are retained, and not wasted,” Dr. Rey said.

The researchers did this by using a substance called nicotianamine and other iron transporters from rice to enhance the movement of these micronutrients from the plant roots to the grains.

Dr. Rey also explained that they also use ferritin, an iron storage protein found in soybean and rice, to boost the rice endosperm’s ((the part of the grain that is retained after polishing))capacity to store iron.

Through genetic modification, IRRI has successfully developed rice with an additional 30 percent of the estimated average requirement for iron compared to the non-genetically modified line.

This improvement was achieved in their 2012 field trials. Dr. Rey said their research team is still working on further increasing the iron levels in the grain, particularly in the endosperm, to above 13 parts per million—the level recommended by nutritionists for making a significant impact in reducing iron deficiency.

Biofortified Rice is on the Way

Dr. Rey said that they are still in the research phase and that there are national and international biosafety standards that the IRRI still needs to strictly comply with as the rice varieties go through the breeding process. Prior to the public release of any GM rice variety, she said, the IRRI has to conduct advanced bioavailability studies to verify its effectiveness in reducing iron or zinc deficiency.

Such studies will measure how much iron or zinc in the rice is bioavailable to humans or is actually absorbed and used in the human body. This will allow researchers to measure how well the rice can reduce iron or zinc deficiency.

DA-Biotech Program supports biofortified rice In the Philippines, strategies to harness biotechnology in crops are advanced by the government through the Department of Agriculture (DA) – Biotechnology Program. Its mission statement is to “…utilize the tools of biotechnology as an alternative means to improving the productivity of local agriculture towards food security and sustainable development.”

Dr. Antonio Alfonso, coordinator of the DA-Biotechnology Program and director of the Crop Biotechnology Center of the Philippine Rice Research Institute (PhilRice), said that what the public should remember about crop biotechnology is that “…genetic modification is a tool to produce sufficient, safe, and nutritious food amid production constraints and changing climatic patterns that have a direct adverse impact in agriculture.”

He said that misconceptions about GM crops have already been debunked by science. Issues regarding safety, control by multinationals, necessity, and cost have long been answered, he added.

GM crops are, in fact, the products that are most thoroughly studied before they are allowed for commercial release, explained Dr. Antonio. This means that breeding processes strictly comply with biosafety regulations.

Scientific interventions such as the development of healthier rice varieties, he said, are benefits of technology that the public sector can take advantage of. Dr. Alfonso said that with the availability of iron- and zinc-rich rice varieties in the market, rice consumers such as Janice’s family, can have healthier rice options. While he stressed that it is still up to consumers to decide which rice they prefer, because rice is both nutrition and culture, they can then make informed choices for the benefit of their families and the community.

Virgilio Gaudia Has a Unique Way of Producing Basi and Vinegar