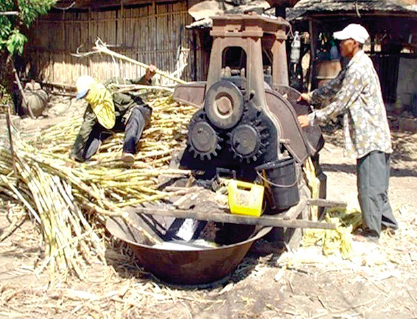 Laoag City—Since the day that basi, that legendary native wine of the Ilocanos, became the one-town-one-product (OTOP) ítem of this city, Virgilio Gaudia, 56, of Brgy. Bacsil decided to shift to sugarcane as his main crop.

His first challenge was to increase his harvest of quality sugarcane juice in order to cope with the increasing demand for basi (sugarcane liquor) and sukang Iloko (Ilocos vinegar) from wine traders and tourists. When he heard about the Mariano Marcos State University (MMSU) program which offered assistance to science and technology-based farms (STBF) and farmers in the province, Gaudia immediately sought the assistance of the university through Dr. Marivic Alimbuyuguen, then the director of the university extension services, and offered his farms for a demonstration project on sugarcane production. Staff members from the university’s extension services quickly visited his farm to set up the project.

Prior to the start of Gaudia’s STBF, other sugarcane farmers in Bacsil were hesitant to believe that the new interventions would bring about positive changes in the yield and quality of their produce. But when they saw the results of the technology interventions that Gaudia followed, they were convinced to adopt the technology in their next cropping season.

One impressive result of the technology intervention was the improved and unique taste and color of the basi and vinegar produced, thus elevating the two products of Brgy. Bacsil over those produced in other provinces.

How the STBF technologies were carried out In December 2013, Gaudia’s SBTF was divided into two portions, each measuring 1,628 square meters. The first was used to showcase the traditional practices for sugarcane production, called “farmers’ practice.” The other was used to showcase the technology intervention that was recommended by experts from MMSU called the “enhanced practice.”

In Ilocos Norte and some areas of Region 1, sugarcane production usually starts in December and lasts until January of the following year. The farms were prepared with conventional plowing and harrowing methods. Both were plowed at a depth of 20 centimeters (cm).

In the farmers’ practice, Gaudia used the Yellow Java variety, the traditional variety that farmers in Brgy. Bacsil use. But in the enhanced practice, he planted the VMC86-550 and VMC87- 559 varieties which are recommended by MMSU experts.

Thus, the soil fertility was enhanced and the plants became robust. In irrigating the plants, Gaudia followed the conventional practices for both areas, using only two liters of water per hill. He harvested the canes of both farms at 8-12 months after planting.

To showcase the difference between the old and new methods of postharvest practices, Gaudia used two contrasting ways of crushing the sugarcane. Canes in the farmers’ practice were crushed using the traditional wooden equipment locally called ‘dadapilan’. This was driven by a carabao. But in the enhanced practice, the canes were crushed using a crushing machine, which was faster and produced cleaner juice.

After 2½ minutes of boiling the extracted juice, he put it in a clay jar called burnay. Again, he used two contrasting ways of fermenting the juice to make basi and vinegar. Juice derived from the farmers’ practice were mixed with 2 kilos each of dried leaves, bark, and fruits of the samak tree. In the enhanced practice, he used the same amount of materials, but he added one gallon of sukang Iloco and 200 grams of dried yeast to each jar. These additional ingredients hastened the fermentation of the juice. To avoid aeration, Gaudia sealed the jars with plastic cellophane instead of the conventional banana leaves. After three days, he opened the jars and stirred the juice.

Since he produced low class basi and vinegar from the farmers’ practice, he only earned R350 per jar which contained 19 liters, or a total gross of R57,050 from the 163 jars he fermented. In contrast, Gaudia earned a gross income of R143,055 from the enhanced practice, a difference of R85,915.

In the third production cycle, Gaudia continued to enjoy a big production output, harvesting 3,856 liters of juice from the enhanced practice. When these were processed into basi and vinegar, he grossed R142,800. In the farmers’ practice, he earned only R134,960, gross, from the 2,640 liters he harvested, a difference of R86,328.

This appeared as “He Has a Unique Way of Producing Basi and Vinegar” in Agriculture Monthly’s July 2014 issue.

Consumers to Enjoy Nutrient-Rich Rice in the Future