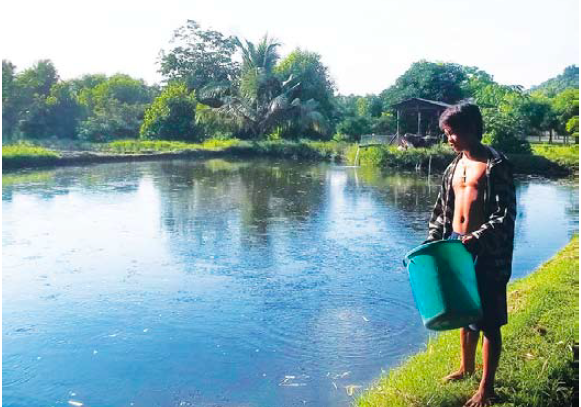 Tilapia farming in Taal Lake located in Batangas—the third largest lake in the country—began in the 1980s.

Presently, there are 6,000 floating cages in the municipal waters of Talisay, Laurel, and Agoncillo. The production of Nile tilapia from cages in the lake was 63,666 metric tons in 2012 or 24% of the total tilapia production of the country, according to the Bureau of Agricultural Statistics.

The cages, built with bamboo rafts floated by plastic drums and surrounded by polyethylene net enclosures, measure 10 x 10 meters (m) with depths of 5 to 10 m. Nile tilapia fingerlings are stocked at 50,000 to 200,000 per cage for culture periods of 6 to 8 months. Intensive feeding of the fish is done with commercial pellets that are either sinking or floating.

A floating cage can cost Php50,000 to construct. While the bamboo frame is replaced after two years, the net enclosure can last for five years. An investment of R500,000 is needed to operate a cage per production cycle. The largest cost is for feeds followed by that for fingerlings. Feeding the fish to satiation (ad libitum) is commonly done.

In a recent visit to Laurel and Agoncillo, Batangas we talked to fingerling producers and cage operators who comprise the main players of the tilapia industry in Taal Lake. Ryan Dagtay of Laurel told us that Nile tilapia fry are transported from hatcheries in Calauan, Laguna and treated for sex reversal in nursery ponds by fingerling producers in Batangas. The sex reversal treatment is done for 21 days using a feed with the male-enhancing hormone (methyltestosterone), resulting in fingerlings with high percentages of male fish (90% or more) that grow faster than untreated ones.

After the sex reversal treatment, the size 22 fingerlings, which weigh on the average 0.5 grams each, are further reared to larger sizes (17 and 14) in floating B-net cages (10 x 5 x 2 m) in the lake for one to two months before being released into the grow-out cages. With a stocking density of 50,000 to 100,000 fingerlings per cage for grow-out to market sized-fish (3 to 4 per kilo), culture is for six to eight months depending on the stocking density and season. A yield of more than 10 tons of fish with a survival rate of 30% and feed conversion ratio of 1.5 (kilos of feed to produce a kilo of fish) are reported.

At higher stocking densities of 200,000 or more per cage, the so- called “modular method” is applied by some cage operators by partial harvesting of the market-sized fish after the first four months of culture followed by subsequent harvests every two months.

In Agoncillo, we interviewed Rogie Alicpala, who practices the “modular method” of growing tilapia to market size. With an initial stocking of 200,000 fingerlings per cage, the fish is sorted or “filtered” with a 4.5 cm-mesh net enclosure inside the grow-out cage to make the removal of the market sized-fish after four months of culture easier. This way, the remaining smaller fish in the cage grow faster without the large fish competing with them for feed and space. Two partial harvests are made every two months thereafter until all the fish attain market size over an eight-month culture period. A much higher yield of more than 28 tons of fish per cage with a survival of 50% can be attained with the method, says Alicpala.

The harvested fish are placed in plastic containers with ice which can hold 35 to 40 kilos each, and are transported by trucks to markets in neighboring provinces and Metro Manila. The ex-farm price of the fish was R87 per kilo, while the cost of production was R67 per kilo at the time of our visit.

With the intensive cage culture of Nile tilapia in Taal Lake, massive ‘fish kills’ have occurred in the past due to poor water quality (low dissolved oxygen and high levels of toxic gases in the water) brought about by “overturns” of the lake due to seasonal changes in temperature and wind velocity. Being a protected area, the lake is managed by the Protected Area Management Board headed by the representative of the Department of Environment and Natural Resources with support of the local government units, the Bureau of Fisheries and Aquatic Resources, and the Taal Lake Aquaculture Alliance, Inc. (TLAAI) to ensure the sustainability of tilapia farming in the lake.

“There are 1.6 million people directly benefiting from the tilapia farming industry of Taal Lake,” says Antonio Manguba, secretary of the TLAAI. “Our town earns the most income of R7.8 million annually from the permits for fish cages,” Agoncillo administrator Eduardo Mendoza said.