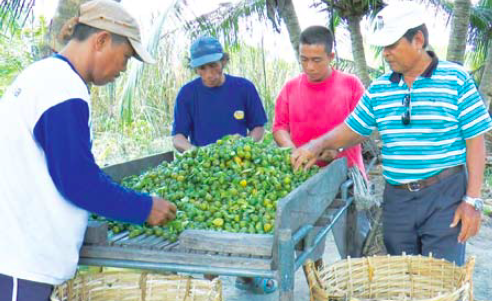 The commodity value chain will now be used as a basis for granting investment funds to rural areas. The Department of Agriculture (DA) through the World Bank-backed R27.5 billion Philippine Rural Development Program (PRDP) will use this to improve market linkages of farm products.

“The PRDP will be using the VCA to guide local government units in identifying priority interventions that will enhance the competitiveness of selected commodities,” said national deputy program director Arnel De Mesa.

The Food and Agriculture Organization (FAO) in its Guidelines for Value Chain Analysis (VCA) defines a value chain as a full range of activities to bring products or services to markets. The VCA focuses on creating value along the chain as well as the rational distribution of benefits among participating actors such as producers, processors, and traders.

To integrate the supply chain approach in rural areas, De Mesa said the PRDP will focus on building the capacities of farmers and ensuring the provision of a strategic network of rural logistics infrastructure within the priority value chains.

Pilot priority value chains in Visayas will cover muscuvado sugar for Region 6, cacao and mango
for Region 7, and jackfruit for Region 8. In Luzon, the pilot commodities will focus on coffee for CAR, mango for Region 1, dairy for Region 2, ampalaya for Region 3, dairy cattle for Region 4A, calamansi for Region 4B, and geonets (coconut coir) for Region 5. “The VCA promotes the efficient allocation of government resources by providing funds only to identified commodities with the potential for expansion and value-adding activities,” De Mesa added.

Taking off from the Mindanao Rural Development Program’s (MRDP) big-ticket projects, the PRDP will continue to assist farmer organizations’ capacities to expand production of raw materials into high-value processing.

De Mesa said the priority commodities in each province were identified based on the value chain analysis and the provincial commodity investment plan (PCIP). PCIP is a rolling plan containing specific infrastructure and enterprise subprojects in support to development of the commodities.

Among the MRDP-assisted projects that will be supported under PRDP include cassava supplying dried cassava chips to a nearby feed processor. In Kapalong, Davao del Norte, a cooperative processes bananas rejected for export into banana flour and supplies food processors. In Zambonga Peninsula, rubber is being processed into higher-value crumb rubber for export. The PRDP will assist them so that rubber exports do not need to be recertified in Malaysia.

“The MRDP has helped augment their capacities and incomes. In the PRDP, we want to see more of these enterprises not only in Mindanao but across the country,” De Mesa said, adding that the VCA also promotes public-private partnership by presenting opportunities for private sector investment to make agricultural production and processing a viable business.

Initial government and private sector partnerships include the development of 3,000 hectare banana plantation in conflictaffected areas in Maguindanao and Lanao del Sur.

“One of the bottlenecks identified was the poor road network. To meet the infrastructure requirement of export banana expansion, the DA-MRDP will establish a R273.8 million farm-tomarket (FMR) road in the area,” De Mesa said, adding that the the feasibility studies and detailed engineering design of the road network. This FMR will link the Talayan to Marader FMR (12 kilometers [km] at a cost of R158.60 million) and the Guingulungan to Lambayao FMR (14 km, R115.2 million).

Meanwhile, the PRDP has also tapped the Philippine Calamansi Association Inc. (PCAI), buyer and processor of calamansi fruit products, to enter into marketing contract with farmers in Mindoro Oriental. Calamansi is indigenous to the Philippines, and about 75 percent of the country’s production comes from Oriental Mindoro. It grosses about R23 million in annual export earnings. “One of the constraints is the low farmgate price (of calamansi) during peak season. With the PRDP’s assistance, farmers formed clusters and entered into marketing contracts with the PCAI. The program has also encouraged farmers to engage in assembling, transporting, and processing,” De Mesa said.

He said 39 farmer members of Oriental Mindoro Farmers’ Assocciation have delivered 58,712 kilograms (kg) of calamansi to PCAI during last year’s the pilot run of the calamansi trading enterprise. “This year, some 200 farmers are expected to deliver from 8,000 to 30,000 kg per week at prices negotiated with the farmers,” he added. De Mesa said the PRDP is also partnering with Kennemer Foods International for the setup of cacao demonstration farms and nurseries as well as plantations in the provinces of Davao del Norte, Davao Oriental, Palawan, Southern Leyte, and Bohol.

In Albay, De Mesa said the PRDP has tied up with Juboken Enterprise, a pioneer producer of geonet in the Bicol region, to provide training sessions to coconut farmers to ensure quality production. “Geonet is being used by the DPWH (Department of Public Works and Highways) in bio-engineering; protected slopes are planted to vetiver grass to prevent erosion,” De Mesa said.

“The draft business plan (for geonet) had been submitted to the region and we are just waiting the submission of the infrastructure projects worth at least R200 million,” he added. Aside from VCA and PCIP, a business development plan is also required for a proposed enterprise projects.