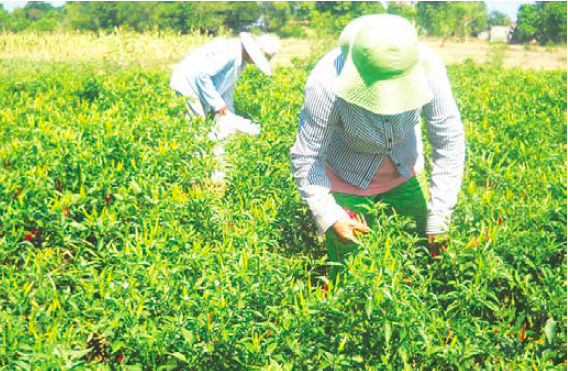 The inspiring story of a vegetable bowl in the north.

Hemmed in by the West Philipine Sea and the Cordillera Mountain Range in Abra province, the municipality of Sta. Maria in the center of Ilocos Sur occupies that province’s narrowest section.

With a fertile valley, the town—which has one of the four Spanish-era churches officially designated as the Baroque Churches of the Philippines listed as a United Nations Educational, Scientific and Cultural Organization (UNESCO) World Heritage Site—is predominantly agricultural.

“Our major crops here are rice, hybrid corn, vegetables, and tobacco,” says Isidro Cabantac, a farmer who is a member of Sta. Maria’s Sangguniang Bayan who is also chairman of its Agriculture Committee. “Most of our farmers plant following a rice-corn-vegetables pattern, while others plant corn all throughout the year. There are also those who plant only vegetables. That’s why we have what we call our ‘vegetable bowl’ and our Pinakbet Festival in March.” The ‘veggie bowl’ he refers to are the barangays of Silag, Cabaroan, and Ampuagan, where the dominant crop is eggplant.

But Cabantac and others differ from the majority of the other farmers, trying out other veggie crops that have good market potential, such as okra, sitao, hot and panigang pepper, and tomato. Encouraged by research at the Mariano Marcos Memorial State University in Batac, Ilocos Norte, the councilor is trying sweet sorghum in his farm. He says it is easy to grow, and its seeds and stalks can be viable income sources. “Sweet sorghum seeds can be ground into a material with a variety of industrial uses,” says Cabantac. “There’s also a demand for the juice from the plant’s stalks.”

He also grows hybrid corn, and has procured camote cuttings to plant on a commercial scale. Cabantac is interested in growing lowland and heat-tolerant varieties of brassica vegetables like cabbage, cauliflower, and broccoli—the growing of which Sonny Boy Ramos, the market development technologist for Ilocos Sur of Allied Botanical Corporation (ABC) has promoted in other towns of the province.

Success in the Veggie Bowl

Rogelio Molina and his wife Agnes of Brgy. Silag have also stopped producing eggplant, through the crop has enabled them to send eight of their 11 children through college. “I was among the first eggplant growers in Sta. Maria in 1978, when Agnes and I were still employed by a government agency under the Department of Agriculture, where we worked for more than 30 years,” says Molina. “We earned much more from eggplant than what we got from our jobs, and we continued planting it after we retired. Many of the now-successful eggplant growers in Silag and Cabaroan learned growing the crop from us.”

When their eldest daughter got married, they had access to wider, more fertile land in Cabaroan because their son-in-law’s family owned a vast tract of land that was only being used as a pasture for livestock because they weren’t interested in farming it. The son-inlaw’s father, a widower, allowed the Molinas to till parts of his property.

After having met and gotten acquainted with ABC’s Ramos whenever the latter was in their area to conduct techno-demos, the Molinas sought the agriculturist’s help in trying out a new crop to grow. Ramos suggested hot and panigang peppers. He brought them seeds of Condor Pinatubo, a hybrid variety of hot pepper that bears very pungent fruit suitable for both the fresh market and for processing.

A prolific bearer, Condor Pinatubo F1 sili is two times hotter than other varieties at 180,000 to 200,000 Scoville heat units. Ramos also brought seeds of Condor Panigang Best F1, a variety that matures 40 to 45 days after transplanting and bears uniform fruits with an average length of 13 centimeters (cm) and weighs an average of 10.5 grams. Vigorous and prolific, Panigang Best plants each produce up to 400 fruits.

Very pleased with the two Condor pepper varieties, the Molinas have expanded their plantings, especially for Pinatubo F1. In mid-January, they transplanted 2,000 new plants in an additional 1,500 square meters (sq. m.). The couple works full time in their field, sowing the sili seeds in seedbeds fertilized with 14-14-14.

To prepare the field for transplanting, they hire a tractor to furrow the land and form narrow hills. For the 1,500 sq. m., they applied a bag of 16-16-16 on the hills and immediately covered the fertilizer with soil. They planted the three-week-old seedlings at 60-cm distances on the hills, which are 75 cm apart.

They used an innovation employed by vegetable farmers in many areas of Ilocos Sur: flooding the furrows during transplanting to make the work easier and faster. The couple did all the transplanting, thereby saving on labor costs.

“The critical times in growing sili are during seedling production and after transplanting them,” says Rogelio. “But after the young plants are established and growing vigorously, it’s smooth sailing from then. Cultural practices for this crop are simple and easy. There’s no need for pesticides or spraying at all. A month after transplanting, the plants start fruiting. And when you harvest the fruit, there’s neither selection nor classification by buyers and therefore no rejects. And something happens to this crop that will not come to many other vegetables: it will have a first birthday.”

The Molinas have sili plants that are almost a year old, nine months old, and five-month-old bearers. They pick fruits every two days, harvesting from 100 to 120 kilograms each picking. Ramos projects that they will harvest up to three-and-a-half to four kilos of fruit per plant. Since Agnes devised a system for delivering the peppers to their customer in Metro Manila’s Balintawak Market, selling their produce has also been simple, easy, nearly costfree, and time-saving. Agnes ships the sili by bus as paid-for freight and then calls her customer with the shipment’s details. Sold.

They plan to also begin planting okra, as Agnes’ Balintawak contact has told her about a recurring demand for that vegetable in the big city. She told her husband that news of their success with Condor Pinatubo and Panigang Best will spread, and so they should not expect to be the peppers’ only producers in Sta. Maria for long. They should start thinking about other crops, too.

Following in Their Footsteps

In fact, in Brgy Ampuagan, Danny Decano has already planted 3,000 sq. m. to Condor Pinatubo F1. In Brgy. Silag, septuagenarian Domingo Venezuela, who came home from Hawaii two years ago to buy three hectares of land to plant to vegetables, may also follow suit, as everything he wants to plant is from ABC. He considers ABC Ilocos area sales manager Edwin Abella and Ramos as his advisers.

Venezuela began planting Condor Atlas F1 Tomato in about 2,000 sq. m. for offseason harvesting in August, September, and October. This well-informed farmer perhaps owes his know-how to his experiences in Hawaii, and makes his workers use plastic seedling trays filled with Klasmann Peat-based Substrate. This ensures nearly 100 percent seed germination and seedling survival. His workers stagger the sowing of Condor Atlas seeds, transplanting month-old seedlings in two rows on plastic-mulched beds. He is the only farmer in the area to do this. Also knowing fully well how much vegetable crops need water, he uses three electric pumps to draw it from the nearby river.

He has also availed himself of a new fertilization technology being promoted by ABC. It involves the use of a special controlled-release fertilizer called Agrocote. Applied only once, Agrocote releases nutrients that the plants need for up to three months. When farmers apply conventional urea and other granular fertilizers to their crops, what they apply immediately releases nutrients to the plants, whether those plants need the nutrients at that time or not. As a result, much of the amount applied—especially during the plants’ early growth stage—is not needed and is thus completely wasted. Furthermore, ordinary granular fertilizers are vulnerable to volatilization and leaching, and thus are also wasted.

The common practice among farmers is to apply granular fertilizers days or even weeks after their previous application. But this results in their starving the plants and depriving them of nutrients during the periods of time between applications—which is the time that the plants’ demand for nutrients increases, as they are growing. Agrocote enables planters to spare their crops from this situation, and this has a direct bearing on plants’ survival, vigor and yield.

Through its controlled-release technology, Agrocote rations nutrients on a daily basis for the plants to absorb and use as needed. The daily nutrient release for the plants lasts up to three months after the one-time application of Agrocote. This single fertilization application saves valuable time and effort that can be used for other important tasks.